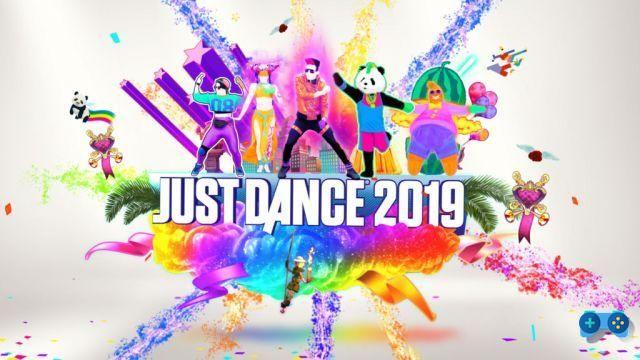 Also this year the time has come to show your skills as dancers, none of us will ever be Roberto Bolle, but fun is guaranteed. Ubisoft continues to focus strongly on this series, born just under 10 years ago for Wii, which has entered by arrogance in the living rooms of gamers.

Konami had understood the potential of this genre of games and had prepared a series dedicated to modern John Travolta, yes, I'm talking about the unforgettable Dance Dance Revolution, those of you who have not seen it at least once in your life within some games room.

The title of Konami was not so advanced, also a victim of the technological limitations of the time, but who among us would have ever bet on a genre dedicated to the "Sunday player"?

The “motion” generation arrived, initially developed with Wii, then imitated by PlayStation with Move and Xbox with the unfortunate Kinect. Those years were the real golden age of this kind of titles, in fact they succeeded in the arduous task of bringing families and girls closer to the world of gaming.


Change, but not too much

Like every year, the Just Dance series has undergone some changes, but it seems that Ubisoft has decided to bring the title back to its ancient origins. Not that in previous editions there have been radical changes, but particularly this year we have noticed a greater simplification in the mechanics of the menus.


The interface has been profoundly modified, increasing in a particular way the simplicity of use, thanks to a menu on the left side of the screen, which will introduce you to all the game modes.

Did you want the bicycle? Now ride!

The simplification of the menu and of the game itself can be seen from the first start, in fact before accessing the game in all its functions you will have to throw yourself into the fray with a couple of songs. After facing this "test of endurance" you will be introduced to the game itself, which as usual will leave us complete freedom of choice on the songs to use as a basis for your failure.

Sounds drastic? Just Dance is that title that is capable of emulating in all respects the emotions of the arena fighters. Your abilities can consecrate you gods, surrounded by envy and thunderous applause or throw you into the deepest bowels of the Underworld amidst evil laughter and mockery.

Just Dance 2019, does not differ much from its predecessors as a game mode, it starts from the Sweat Mode to the one dedicated to children, passing through the tracklist and the new World Dance Floor (mode dedicated to online competition).

let's talk about the main aspect of a dance game: the music, Just Dance 2019 has 42 new songs, ranging from the timeless Rythm of the Night by the eurodance Corona group to Un Poco Loco, soundtrack of the Disney Pixar film "Coco" .


Not enough for you? Then you can enrich your playlist with Just Dance Unlimited, a subscription plan that at a cost of about 25 euros per month will fill your hours with 400 songs, taken from the previous chapters of the series.

The base game, however, will guarantee you a free month of this indispensable function, trust the 40 tracks will not last all this time, then put it this way, it is an investment for the "costume test".

Just Dance is a game designed for motion controls, from the Switch Joy-Con to the PlayStation Move, passing through the app available on smartphones (the application is not compatible with the version dedicated to the Nintendo console).


The undersigned has tested the PS4 version with both Move and PlayStation Camera and with the Mobile App, the experience is almost identical, even if personally the smartphone application turns out to be more comfortable than the space offered by the PSMove.

Small note, keep your smartphones steady, during the excitement you could hit someone or make them fly out of the window. We advise you to use low-cost products, seeing an IPhone X spinning is not pleasant at all.

- The free month of Just Dance Unlimited is a plus

Summary Winter is coming (I am not a Stark) and as a result will come those weekends spent at a friend's house based on beer, snacks and challenges. In these moments you will be happy to own titles like Just Dance, those party games that during the year you snub in favor of competitive single player or multiplayer titles. Here you can show everyone what you are made of, wiggling like crazy to the rhythm of music, who knows that you will not be able to win some hearts thanks to your "Happy Feet". Quoting a young Jamie Bell (Billy Elliot, 2000) "... it is as if I have a fire inside, as if ... I am flying. I am a bird. I am electricity. Yes, I am electricity."
Final Fantasy VII Remake Intergrade will have no new dlc: Ever Crisis will be available for free ❯