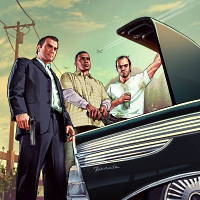 CAUTION: We recommend all visitors who have not yet completed the main storyline not to read this article as it necessarily contains (not serious) spoilers about some content.

It is not uncommon that Rockstar Games take pleasure in inserting cute Easter Eggs or puzzles in your titles. GTA: San Andreas it has been pervaded by clues that often and willingly have nurtured useless mysteries or witch hunts, but in the fifth chapter of the Grand Theft Auto saga it seems that some "special" contents have really sprung up. for the uninitiated, an easter egg is a series of contents (objects, posters, writings, etc. ..) voluntarily inserted by the programmers in the development phase to dampen the game atmosphere and challenge the players to an often difficult collection hunt.

We went like other users in the continuous search for special contents, and thanks to the collaboration of some enthusiasts we were able to find a first list of these contents. Today we present 10 Easter Eggs found around Los Santos and Blaine County.

1) The frozen alien from North Yankton

In the prologue centered on escaping after a robbery, Michael will take possession of the escape car, and the driver will be instructed at some point to turn right, because there is a police checkpoint ahead of us. . After the turning you have to go down on foot and wander around the area (risking to make the mission fail). On the ground (not exactly where) we should see without too much difficulty an alien frozen under the ice. 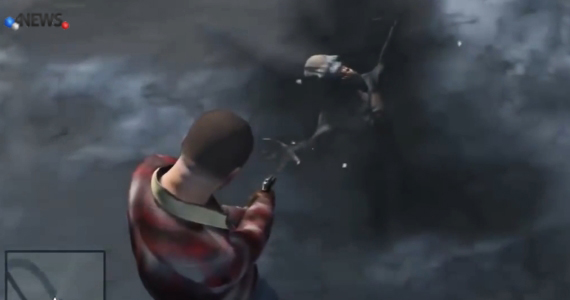 In addition to the mural shown in the first video-gameplay trailer with the words "We Missed You last Time" which translated means "We missed you last time", indicating the return to origins in a revisited Los Santos; Rockstar has provided clues to indirectly make us understand that the characters encountered in GTA: San Andreas (some) are alive and well. 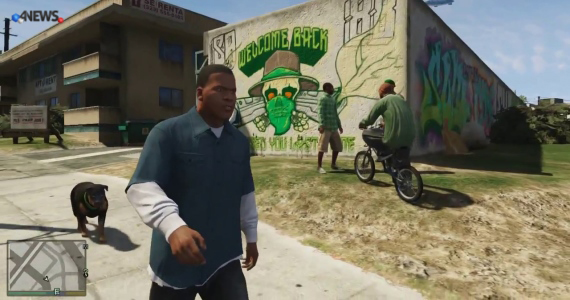 Among the items in Franklin's room is an album engraved with the name "OG Loc", a rapper he met in GTA: SA. This implies that the artist managed to make a fortune in the years after the events he experienced with CJ. 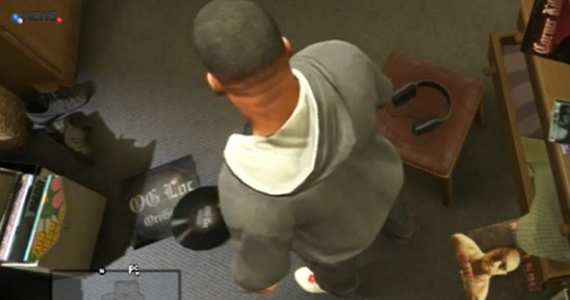 3) The mystery of Mount Chiliad

Rockstar Games seems to love plots or conspiracy theories. In addition to the 50 components of the alien ship to be found and the numerous government men ready to shoot on sight if we cross some off-limits areas, it seems that there is more than one frozen alien under the ice. Mount Chiliad is located to the northwest of the map, and in the highest part, behind a group of people intent on observing the view, behind the platform is the words "Come back when you have completed the story". You have to go back to that place when the game is 100% completed. Returning to the observation point around 3 am you will see a beautiful alien spaceship (some have confirmed with the intent to kidnap us but we still have to test for ourselves).


As to what happens after 100% in returning to the observation point we have yet to find out. Some users have told us how in areas including Fort Zancudo and others that display the “FIB” logo, alien spaceships can be found and taken. 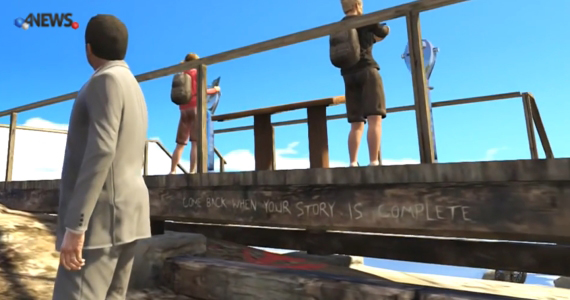 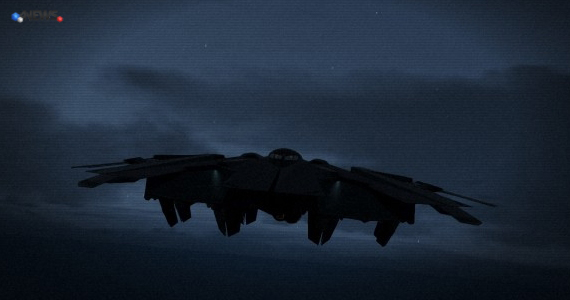 Anyone who subjected the blue map of GTA V to ultraviolet light discovered a point marked "I'm Here" on the map. It is an area of ​​the ocean that hides an intact alien spacecraft in the bottom. No interaction is possible and we do not know if it will be able, together with other elements, such as DLC, to unlock additional missions. 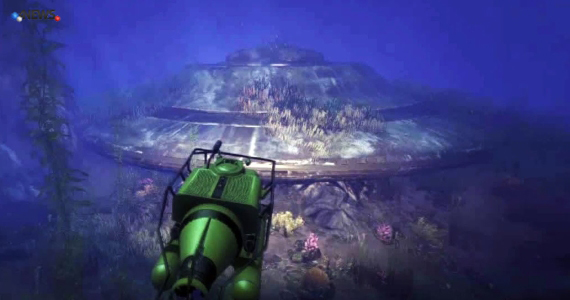 The Ester egg is not obvious here but by working with imagination it is possible to make a connection with another fabulous Rockstar Games title. When Michael is invited by Lester to change clothes to enter the offices of the "Life Invader" he will reach a suburban in the city. After a dialogue with the saleswoman, we will be able to buy some youth items and among these a shirt appears that immediately recalls Max's clothing in Max Payne 3 called “Shirt with parrots”. If we go and dabble at the barber shop, it will also be possible to imitate the beard and shiny bald head of the New York hero. “Coincidences? I don't believe "(cit.) 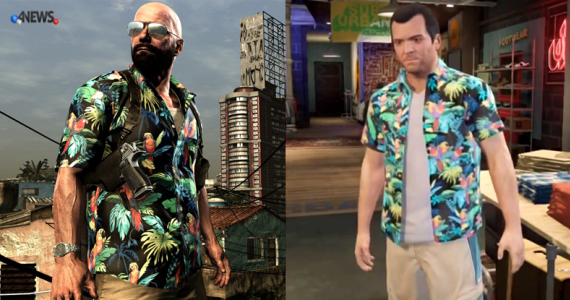 Trevor will also be able to wear themed clothes. Just introduced as the third main character, in reaching a shop not far away it will be possible to buy not one, but two interesting items. The first is a jacket perfectly identical to the one worn by Ryan Gosling, character of Drive (2011) with a yellow crab placed on his shoulders. The second is more particular: it is the clothing worn by Jack Nicholson in the famous film directed by Kubrick: The Shining (1980), the English title is “Overlooked Red Blouson” referring to the Overlook Hotel. 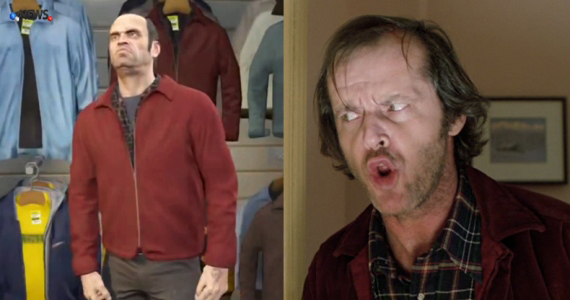 As soon as Franklin is moved to the new house, taking a careful look at the library we will notice among the books a particular title "Red Dead" written by J. Marston. The reference is clear to the Red Dead Redemption universe, another Rockstar Games masterpiece only for consoles (and of which we await a sequel, and in many desperate PC conversion that Rockstar San Diego refuses to do) The name John "Jack" Marston brings to mind the son of our main character in Red Dead Redemption and you can only imagine what story is written in it (we could also mention it but not without spoilers for those who have not played the title) Unfortunately, any interaction is not possible with the book . 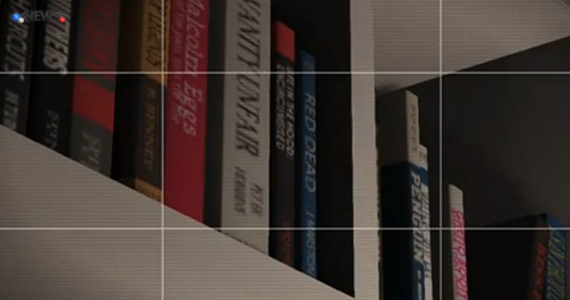 A house can be seen northwest of Richmond. This recalls the shapes, the neon and also the atmosphere of the famous Playboy house. At the moment it is not possible to visit it but it is not certain that some modders for the PC version, or Rockstar Games itself cannot use it as a background for additional content. 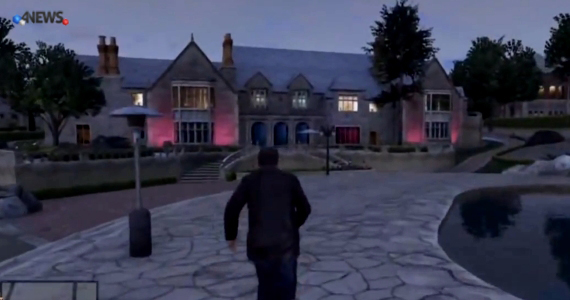 Trevor has it bad with the O'Neil family, so as to exterminate the whole race, but some brothers manage to escape and in the second dedicated mission, we have to finish them. The mission that completes the hunt ends in a wood where Michael with a sniper rifle equipped with a heat sensor will have to peck at the remaining enemies. Among the figures that will appear in the lens, in addition to the dogs, a strange humanoid figure will appear at the bottom right. This will disappear as soon as we frame it. This is precisely the legendary Bigfoot "apparently" also spotted in GTA: SA. But disproved by the experienced modders who have scoured all the game files. 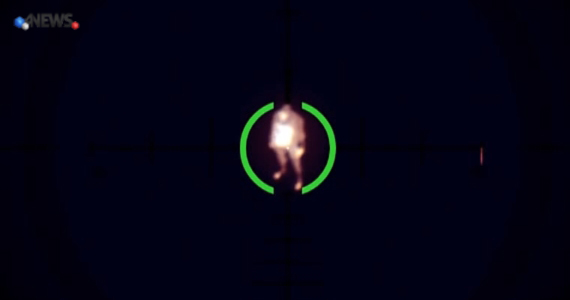 One of the best implemented and also terrifying easter eggs is the one that sees a mountain as the protagonist; a woman and her husband. We are talking about Monte Gordo, where at 23 pm we will be able to witness the appearance of a ghost with female features. Getting too close to it will disappear, leaving the word JOCK written "in blood" on the ground.

By doing a quick internet search in the smarpthone that the 3 characters will use, the name JOCK is associated with John Cranley, a Vinewood stunt man who has chosen the path of politics, competing for the position of governor during the main campaign of the game. An archived newspaper reveals how John and his wife were having an argument on Mount Gordo one evening. The husband wanted to change his life and seek fame and fortune more than he had already acquired but the wife did not agree. What everyone knows is that his wife fell off the mountain at one point, facing certain death. But by combining the news of the newspaper and the written JOCK in the blood, the true version of events will seem clearer to us. 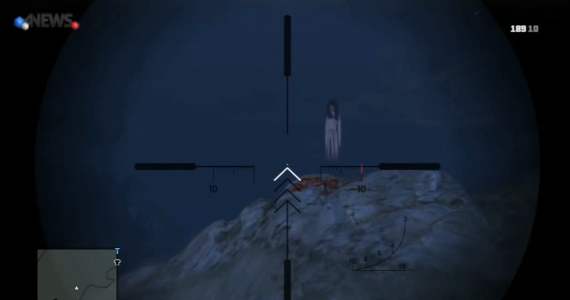 We take advantage of the video posted on youtube by the colleges of "GameFront" to show you a footage of the ghost:

Located in the Senora National Park. It is simply a matter of going at night in the opposite direction to the welcome sign at the park and starting to search among the huge boulders. The use of the torch is recommended, used as an accessory for the forge for example. On these boulders the number eight is written and there are more than one, following the tracks we will enter a pile where something truly sinister will appear. An equally sinister music will accompany the dish.

Here is the photo, the verses and the translation: 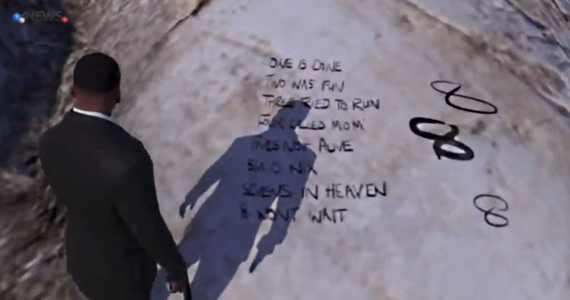 We also translate the poem and obviously it loses the rhyme effect:

"The first is done (dead)

Second it was fun

Quinto is no longer alive

Seventh is in heaven

the eight will not wait "

After reading the poem, it is clear to us that the murderer is looking for the eighth victim ...

If you have any other easter eggs or quirks that GTA V is packed with to communicate: do it !!!!