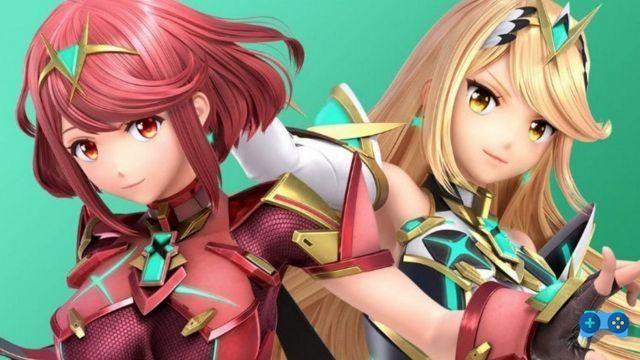 As announced by Nintendo, Friday 5 March, Pyra/Mythra of Xenoblade Chronicles 2 will officially join Super Smash Bros. Ultimate for Nintendo Switch. This character is part of Challenger Set 9, which also includes a new scenario and a selection of music tracks from Xenoblade Chronicles 2. In a video introduction, Super Smash Bros. series director Masahiro Sakurai detailed the moves of Pyra / Mythra and the new scenario, Alrest's Sea of ​​Clouds. The full video is available at https://www.smashbros.com/.

Challenger Set 9 is included in Super Smash Bros. Ultimate Fighters Pass Vol. 2, available for purchase on Nintendo eShop for € 29,99. In addition to Pyra / Mythra, this pass also gives access to Min Min from ARMS, Steve and Alex from Minecraft, Sephiroth from the FINAL FANTASY VII series, and two characters to be revealed in the future. The Challenger 9 Set can also be purchased individually for € 5,99.

In Xenoblade Chronicles 2, Pyra is a legendary Gladius, a living weapon alongside protagonist Rex. Following a series of dramatic events within the game, Mythra makes her debut as a second Pyra personality. The two, linked by fate in the game, are also connected on the battlefield of Super Smash Bros. Ultimate.

Technically, Pyra and Mythra are a unique character on the selection screen, but players can switch between them at any time during matches. Pyra has tremendous power, while Mythra harnesses her speed. By switching between characters, players can harness the power of Pyra to unleash devastating attacks and move nimbly across the battlefield with Mythra's speed. This synergy makes Pyra / Mythra a unique character in Super Smash Bros. Ultimate.


At the moment Super Smash Bros. Ultimate includes three tracks from Xenoblade Chronicles 2, but after downloading the Challenger Set 9 the number will increase to 19. Also, from tomorrow, in conjunction with the release of Pyra / Mythra, new elements will also be available for paid Mii Warriors, including Arthur's helmet and armor from the GHOSTS'N GOBLINS series, Rathalos's helmet and mail, and the MONSTER HUNTER series helmet and mail.