From The Walking Dead to the masters of comics.

The party for the XNUMXth anniversary of Lucca Comics & Games continues and has once again registered an exceptional number of visitors (around 60.000 visitors); remember that the event will end tomorrow with another exceptional day. It will be the last opportunity to meet all the greatest guests of this incredible edition and to live the unique and unforgettable experience that only the Island that exists can offer.

LUCCA COMICS & GAMES 2016
FROM WALKING DEAD TO 50 YEARS OF STAR TREK, PASSING FROM THE MASTERS OF COMIC

Many events also on the fourth day of Lucca Comics & Games, celebrated by almost 60 thousand people. The color was guaranteed by the Walking Dead 'parade' with an incredible horde of undead that invaded the streets of Lucca. Among the celebrations, the one dedicated to 50 years of Star Trek stands out, followed by many old and new fans of the famous series. The success at PalaYoutuber continues, with the Mates protagonists of the day, and the usual following of fans literally crazy for the stage performances of the young youtubers.

The day was marked by the presence of the most important pencils on the world scene, including the famous English author Philip Reeve, in Lucca Comics & Games 2016 to present his new novel "End of the line for the stars", e Tony DiTerlizzi, world famous writer and illustrator ("Magic: the Gathering", "Dungeons & Dragons", "The Spiderwick Chronicles").

Another meeting of the highest interest was the one with the volcanic Simone Bianchi, Marvel cartoonist born and raised in Lucca, moderated by Emanuele Vietina, co-director of Lucca Comics & Games. Simone presented his recipe for collaborating with the major comics majors, with valuable advice and suggestions for young budding designers.

Last day in Lucca for Charlie Adlard who took the opportunity to present the splendid graphic novel "White War". Set on the Dolomite peaks during the Great War, the events narrated in the novel begin exactly one hundred years ago, on October 31, 1916, during a bloody battle in the snow. The volume, inspired by an essay by Mark Thompson, is funded by the Trentino region.

The party for the XNUMXth anniversary of Lucca Comics & Games it will end with a memorable day. It will be the last opportunity to meet all the greatest guests of this incredible edition and to live the unique and unforgettable experience that only the Island that exists can offer. 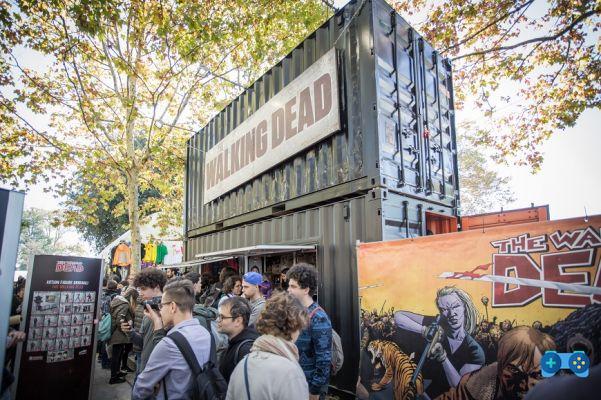 Among the unmissable events of tomorrow (Tuesday 1 November):

Comics: “All or Nothing” - with Marco and Sara Tardelli. Meeting with Milo Manara and Frank Miller - The meeting of the century between two myths of world comics. Best Movie “Beyond the cinema” - with Dario Moccia, Roberto Recchioni, Zerocalcare. Shockdom presents The art of the Rincione brothers: Paperi, Noumeno and Paranoiae - meeting with the authors

Intellivision Amico arrives in autumn 2021 with 30 games at launch ❯