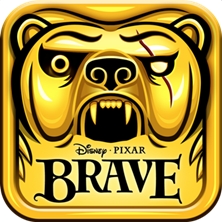 Take on the role of the new heroine Merida and discover the settings inspired by the highly anticipated Disney • Pixar fantasy animated film “Rebel - The Brave” in the new chapter of the 3D endless runner Temple Run.

With totally redesigned graphics, Temple Run: Brave includes numerous environments, exclusive characters and additional features compared to the original game. Among these, for example, the ability to shoot with the bow with which for the first time players can aim targets which, if perfectly centered, allow them to earn extra coins. Once downloaded, Temple Run: Brave allows the player to start the game with a free supply of coins equal to 0,79 euros, or 2.500 coins, with which to buy the power-ups needed to defeat Mordu, the "demon bear ”who is among the main villains of“ Brave ”.

Temple Run: Rebel - The Brave has all the features that made the historic Temple Run famous, such as intuitive swipe and tilt controls, character enhancement and the use of fun power-ups. In addition, you can access the Game Center by viewing leaderboards and achievements and competing with friends. Created by Imangi Studios, Temple Run is a success that has conquered the public in a short time, with 80 million downloads, enough to enter the "Top 30 Apps to download" of Time magazine.

Do you want to complete all the achievements and trophies and know all the tricks, guides and secrets for your video games? SoulTricks.com is a group of video game fans who want to share the best tricks, secrets, guides and tips. We offer the best content to be a source of useful information, so here you can find guides, tricks, secrets and tips so you can enjoy your games to the fullest. Are you ready to get all the achievements of that game that you resist so much? Enter and enjoy your favorite video game to the fullest!
Inside Xbox: all the news of the live on May 7th ❯

Pixel 6 will have a custom processor from Google

Add a comment from Temple Run: Rebel - The Brave, available on Apple Store and Google Play