Bass you can feel

Let's face it, despite being widely rumored in the months preceding the reveal, the choice of Apple with iPhone 7 to give up the 3.5mm jack has left everyone confused and not only because it is still one less feature on a phone sold for 800. euros, but also because it has automatically knocked out some of our favorite headphones on the go. Sure, there's the adapter, but frankly we already have far too many things to carry around. The Bluetooth solution until the day of the meeting with the Skullcandy's Crusher Wireless he had never convinced us. The sound of the bluetooth headphones tested so far appeared either too flat or unconvincingly equalized. All this was then accentuated by the tendency of the BT transmission protocols to further flatten the sound range, especially in the low and ultra low frequencies, already sufficiently reduced by the MP3 format. All this, in fact, up to now.

With the Crusher Wireless, Skullcandy seems to want to change the perception that the public has of its products, no longer intended for a mainly young and alternative user, but aimed at users who are aware and attentive to details.
On the all-black rigid cardboard packaging and with a nice magnetic book opening, there is no room for frills, with the front entirely dominated by a photo of the headphones and the Skullcandy logo. Open the package the headphones are contained in a beautiful padded bag useful for transport, on which the classic Skullcandy skull is sewn. 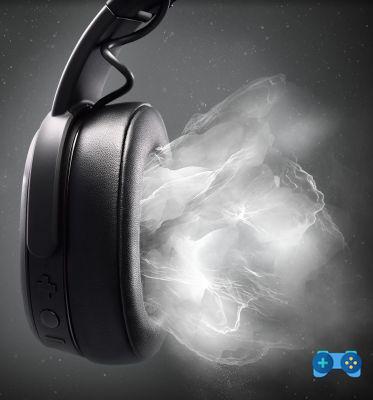 The inside of the bag is also covered with a delicate fleece cloth that creates a pleasant effect to the touch and is equipped with a comfortable retina to hold the included accessories (the charging cable and the 3.5mm jack cable for wired connection ), also neatly contained in two small black boxes. From the unboxing it is therefore evident the great attention placed by Skullcandy in the attention to detail, which contributes to increasing the perception of product quality.

The design of the headphones also highlights a change of course for the company. No excesses or questionable color combinations, but only a sober and elegant matte black dominates the design of these Crusher, the only exception of which is represented by the two dark gray logos placed on the arch immediately above the pavilions.

The aluminum headband is covered in leather at the top, while at the bottom it is padded with memory foam. The generous padding of the two pavilions, whose dimensions are not very large, are also made of memory foam and this could create some problems, at least in a first moment of adaptation, to those with particularly large ears; however, the extreme comfort of the padding and the perfect resistance that the headband exercises on the temples, guarantee an exceptional fit and a really high comfort even after several hours of use. In addition, despite not having any active noise cancellation system, the memory foam paddings do their job of soundproofing very well. Finally, the plastics, all of excellent workmanship, are covered with a rubberized coating, which increases the perceived quality of the product, giving it a perfect high-tech style in combination with the iPhone 7 matte black.


As already seen in other Skullcandy products, the headphones are equipped with multimedia controls on the right side: the plus and minus key for the volume and the skip of the tracks, and the central key which acts as Play / Pause and answer key for calls. The microphone for calls is also integrated in the same pavilion. On the left side, in addition to the microusb connector for charging and the 3.5 mm jack input for cable connection, a selector allows you to adjust the presence of the Stereo Haptic bass, which we will talk about later. It is the haptic bass selector, in non-rubberized plastic, that wants to nitpick, the only element a little out of place in the practically perfect design of these Crusher.

The weight of 275g, a battery that guarantees up to 40 hours of battery life and especially the possibility of folding the pavilions inside the arch, make this headphone incredibly comfortable to carry around.

With the Crusher Wireless, Skullcandy has achieved what seemed unthinkable until now: a headset that could offer a performance in the bass comparable if not higher than that offered by wired headphones with a decidedly higher price even by several hundred euros, with a yield that, without fear of denial, we can compare to that offered by some home theater solutions. A Copernican revolution that has it at its center Stereo Haptic Bass, a new proprietary technology able to calibrate the performance of the low frequencies between the right and left pavilion, with the ultimate goal of guaranteeing total immersion that will make you forget you have headphones and leave you at the center of the sound stage.


Lo Stereo Haptic Bass has also been specially designed to reach ultra low frequencies unattainable by any other headphone currently on the market.. The bass so literally comes to life, so much so that you can physically hear it by placing a hand on the headphones, with the two large earpads vibrating under the powerful electronic bass hits of Massive Attack in Teardrop or the exaggerated excursions of Kanye West and Adam Levine in Heard them say, reference point for our bass tests. 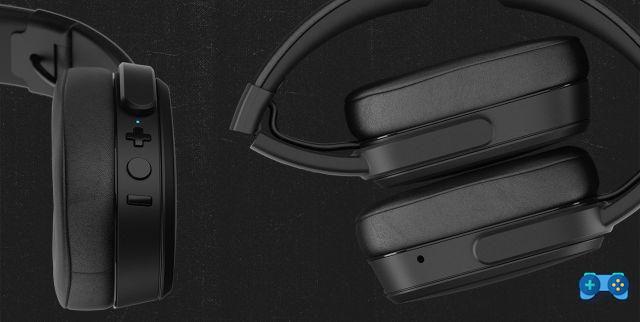 On the left side, a special selector allows you to adjust the presence of the haptic bass: upwards for exuberant basses, downwards to decrease their presence until they are completely deactivated. (To give you an idea of ​​what I mean when I talk about "exuberant" bass, just know that my "bass enthusiast" home theater setup includes two SVS PB12-NSD and that with these Crusher the haptic bass selector does not have never had to exceed ¾ for a more than satisfactory yield ... in a nutshell: exaggerate !. ed.). This feature, thanks to the manual slider, allows use even when the headphones are connected via cable, therefore in the absence of a battery, a solution that has proved to be more convenient than the bass booster of other headphones such as the Sony XB950BT which can only function with charged battery.

The attention to the bass, however, did not result in a lack of attention towards the other frequencies of the sound range. Thanks to a perfect equalization of the two drivers, the Skullcandy Crusher Wireless offer, indeed, incredibly clear and crystal clear, rather analytical highs, that gave us sonic details that we thought did not exist, or unthinkable for a wireless headphone and an optimally balanced midrange. The delicacy of the charlestone and snare drum in Lilac Wine, by Jeff Buckley in the superb Pono Remaster, or the Basque tambourine and the clavinet of Stevie Wonder in Higher ground, are so realistic that you will feel like you have them next to you. With these characteristics, the Crusher naturally give their best with pop music, electronics (Junk, M83's latest album, won't be their best work but with these headphones it sounds great!) and R&B, but the ability to adjust the haptic bass to almost deactivate it, make them incredibly flexible, also suitable for listening to rock classics. The Eagles' performance with Hotel California is masterful in this sense.

However, like all quality headphones, even these Crusher do not forgive anything and are clearly affected by the quality of the source; our advice is, therefore, if you have not already done so, to start converting your music collection into a loss less format like Flac.

Do you want to complete all the achievements and trophies and know all the tricks, guides and secrets for your video games? SoulTricks.com is a group of video game fans who want to share the best tricks, secrets, guides and tips. We offer the best content to be a source of useful information, so here you can find guides, tricks, secrets and tips so you can enjoy your games to the fullest. Are you ready to get all the achievements of that game that you resist so much? Enter and enjoy your favorite video game to the fullest!
Assassin's Creed Odyssey, where to find Atlantis ❯

Creative SXFI AIR GAMER: all in one headset