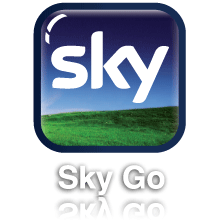 Sky audiovisual broadcaster has released the new version of its application Sky Go for smartphones and tablets of type Android e iOS, which can be installed on devices of the Samsung family such as Galaxy S II, S III, Note, Note 2, and of the Apple family such as iPhone 3GS, 4, 4S, 5, iPad, iPad 2, new iPad, mini iPad.

This version includes a new layout to adapt the App to the style of the official website, including the new on-demand service, several improvements to have greater stability and speed of execution.

Only for SKY subscribers for at least a year, the SKY-on-demand service with over 100 films and events!

We remind you that only SKY subscribers registered on the official website can take advantage of the viewing of a channel list taken from their subscription package. Everyone else can only watch the free SkyTG24 channel.

The service can be used on compatible devices with a maximum of two registrations associated with the subscriber's Sky ID:

To check if your computer meets the minimum requirements for viewing Sky Go, consult the "Help" section of the skygo.com website

WARNING! Sky Go channels are not visible on jailbroken iPhones and iPads and Samsung tablets modified through rooting. The exceptions are Sky TG24 and Sky TG24 EVENTI, always visible.

Do you want to complete all the achievements and trophies and know all the tricks, guides and secrets for your video games? SoulTricks.com is a group of video game fans who want to share the best tricks, secrets, guides and tips. We offer the best content to be a source of useful information, so here you can find guides, tricks, secrets and tips so you can enjoy your games to the fullest. Are you ready to get all the achievements of that game that you resist so much? Enter and enjoy your favorite video game to the fullest!
Pokémon, Mew released at Gamestop in February ❯

Pixel 6 will have a custom processor from Google

RAZER and Team Queso together in eSports on mobile

LG definitively closes the mobile section, official the end of an era

New Nokia X20 and the whole new range of smartphones

Add a comment from Sky Go, version 2.0 available for Android and iOS