Xbox 360 launches an unmissable offer for the whole family: the new Xbox 360 Arcade console is equipped with an HDMI input and includes five games, a wireless controller and a 256 MB Memory Unit for saving games.

Microsoft today unveiled Xbox 360 Arcade a new home console setup that includes 5 games from the Arcade Pack. With the launch of the new model available in stores starting Friday, October 26, 2007 at an estimated retail price of? 279,99, Microsoft's Xbox 360 realizes the response to Sony's price cut with PS3. 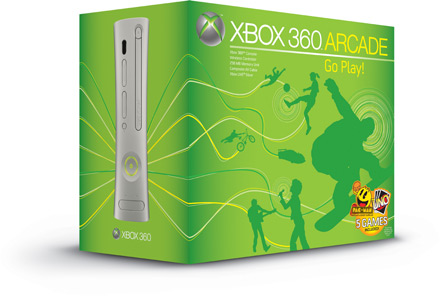 The new console will be equipped with HDMI output, wireless controller, 256mb memory card (HD is not included) and 5 new arcade games (which can also be purchased by other users via the Xbox Live marketplace):

· "PAC-MAN Championship Edition," (NAMCO BANDAI Games), is the evolution of the most classic and loved of games. The iconic character of the video game world is back with new features, brand new game modes, constantly evolving mazes and optimized graphics and sound.

· "UNO®" (Electronics Arts), is the transposition of the card game most loved by families, in which three other players compete against each other to match colors and symbols, and using special cards that make you skip the turn or reverse the hand. Whoever finishes the cards first wins.


· "Luxor 2" (Electronics Arts), is a mix of action and strategy in which you have to shoot and destroy the magic spheres before they reach the end of the path. The player has 88 levels at his disposal to try his hand at a fun and immediate gameplay, made even more exciting by the bright and colorful graphics inspired by ancient Egypt

· "Boom Boom RocketT" (Electronic Arts), is a game based on music and rhythm in which wonderful fireworks are set off in time to famous remixed pieces of music. The player must keep an eye on the combo multiplier as he launches colorful fireworks by pressing the buttons at the right pace.

· "Feeding Frenzy": nibble, chew and swallow anything found along the Frenzy Coast. The rules are simple: you have to eat everything smaller than yourself and stay away from what is bigger. The more you eat the more you grow and thus increase the chances of facing the terrible Shark King shark.

"The pre-Christmas period is ideal for offering an Xbox 360 for families, designed for gaming, but also for videos and music, in short, a 360-degree home entertainment system capable of meeting the needs of all family, ”said Maurizio Zazzaro, Country Manager of Microsoft Entertainment and Devices. 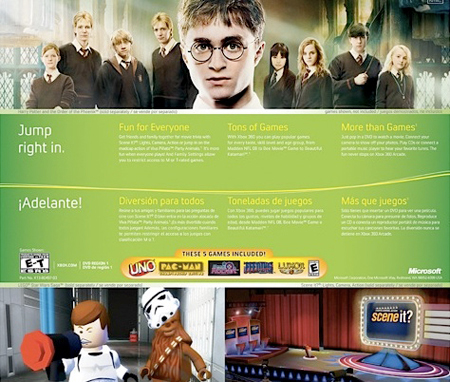 “Like Microsoft, we want to offer a safe entertainment environment, where each of our consumers can fully enjoy the benefits of digital entertainment, in total safety. In fact, a product for families such as the Xbox 360 Arcade provides state-of-the-art features in the field of parental control, able to guarantee parents maximum protection in home entertainment by always checking that the contents offered through the console are suitable for the age of each member of the family, even the youngest ones ”concludes Zazzaro.

Microsoft's commitment to family entertainment is further underlined by the vast collection of over 200 family games, available in stores starting in the coming months. Among them: “BEE MOVIET GAME” (Activision), “Guitar Hero III®: Legends of Rock” (Activision), “Naruto: Rise of a Ninja” (UbiSoft), “Scene It? Lights, Camera, Action "and" Viva Piñata: Party Animals "

Do you want to complete all the achievements and trophies and know all the tricks, guides and secrets for your video games? SoulTricks.com is a group of video game fans who want to share the best tricks, secrets, guides and tips. We offer the best content to be a source of useful information, so here you can find guides, tricks, secrets and tips so you can enjoy your games to the fullest. Are you ready to get all the achievements of that game that you resist so much? Enter and enjoy your favorite video game to the fullest!
FIFA 21 - FUT Ultimate Team, how to recognize a Walkout ❯

Add a comment from Xbox360 goes arcade and cuts the price