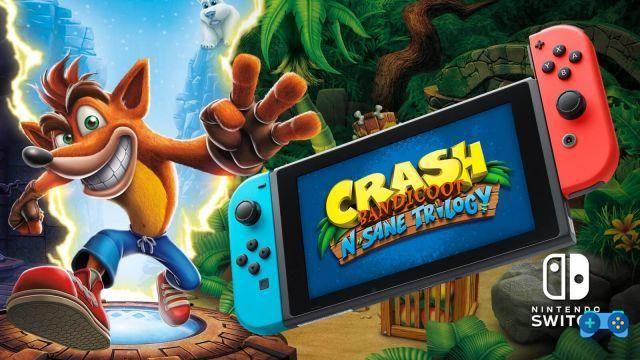 When Crash Bandicoot made its appearance in the 90s, it didn't take long to become the mascot of the then futuristic PlayStation. It certainly didn't reach the same level of popularity as Mario or Sonic, but the original Crash games were fascinating platformers that managed to win over audiences thanks to fun characters, different game environments and unique style levels. Also, unlike his "colleagues", Crash was born in 3D; Mario and Sonic instead adopted it later.

With the arrival of the collection N. Sane Trilogy also on PC, Xbox One and Nintendo Switch, we have the opportunity to replay the first three chapters of Crash in style, which in the face of some necessary technical improvements to make the gameplay more suitable for the current videogame generation, are nothing more than replicas live games published at the time. Developed by Vicarious Visions, the N. Sane Trilogy collection features remastered versions of Crash Bandicoot, Crash Bandicoot 2: Cortex Strikes Back and Crash Bandicoot: Warped. Forget the rough look of the original characters and environments, thanks to the good conversion work done, the N. Sane Trilogy looks like a real 3D cartoon.

Compared to the PlayStation 4 version, released last year, the N. Sane Trilogy on Nintendo Switch (as well as on Xbox One and PC), it presents no differences in terms of content and much less in terms of gameplay (keep the calendar handy). The only significant addition concerns the native presence of the two bonus levels: Stormy Ascent e Future tense. The first was made by N for Crash Bandicoot. However, the developer decided to discard it considering it too difficult to complete. Now, we have the (un) luck of playing at the unprecedented level that will test the temper of even the most seasoned players, among driving platforms, spikes and enemies ready to hit us when we least expect it. The second stage, on the other hand, was created directly by Vicarious Visions. It can be played right away by directly accessing the Crash Bandicoot: Warped menu. It is basically based on the enemies of the third installment of the series, including traps of all kinds, lasers, missiles, rollers and so on and so forth and presents itself as a double-faced challenge. In fact, the level will be difficult to complete if played immediately using the basic movements, much simpler, if instead we decide to rely on the upgrades of our extravagant protagonist.

Crash always with us

This trilogy seems to fit perfectly on Nintendo Switch, on the other hand, the big N has considerable experience in the production of platform titles. Having the opportunity to play such a title on Nintendo is already an achievement, but being able to do it on the move is truly something indescribable. The work done by Vicarious Visions to make the Crash Bandicoot trilogy run smoothly is excellent in many ways. While on the one hand it is possible to admire the three chapters in a new graphic format, on the other the software house has been careful not to distort the very nature of the three titles, allowing the player to touch (and admire with their own eyes) , also the evident evolution of the three productions.

The Nintendo Switch version, as was to be expected, however, must make some compromises. In portable mode, the real strength of Nintendo's hybrid, sacrificing some details (for example Crash's fur is less convincing, as are the reflections of water and reflective surfaces), the resolution reaches 853x480p. Although the resolution can almost scream scandal, the handheld version remains very enjoyable thanks to a convincing color rendering, albeit less lively than other platforms. Turning to the TV mode, the resolution does not reach full HD, settling on 720p. Perhaps it is precisely in the docked version that the N. Sane Trilogy discovers the side most, in fact the lack of details in the game environments, as well as an unconvincing management of shadows and lighting, as well as an evident aliasing effect, could make turn up your nose a little. Both in docked and portable mode, as well as on PS4 and Xbox One (only in the PC version it is possible to reach 60 frames per second), the framerate remains well anchored at 30 fps. Ultimately, considering the obvious hardware technical limitations of Nintendo's hybrid, the conversion work done by the US developer is really of the highest level.

Unfortunately, one of the features that could not be radically changed is the control system. If you are approaching the series for the first time, it is good to know that the mobility of the good Crash is light years away from today's videogame productions. It is felt a greater woodiness in the movements, greater difficulties in making a calibrated jump without ending up below and the fact of passing to a better life with a single blow from the enemy on duty, could ultimately be frustrating. This frustration is made even more evident by the very structure of the game, now no longer in step with the times. Many modern platformers offer the player several options and allow the player to choose alternative routes based on their preferences and skill level. In Crash, there are no other ways to move forward, it is not possible to skip a level or get upgrades that make us invincible, the only way to progress is to try, play and replay, until you complete the stage.

- sound effects as well as the accompanying music have not been modified and therefore remain identical to the original ones. We still got a tear after picking up a Wumpa fruit or destroying the first crate with Crash's spinning abilities. 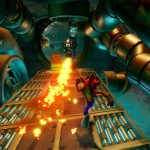 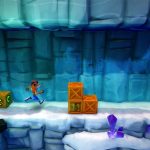 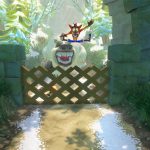 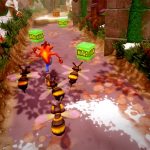 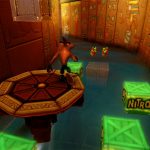 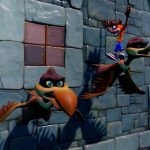 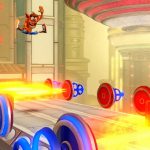 - Crash for the first time on Nintendo consoles

- You feel the weight of age

Summary
Crash Bandicoot for the first time arrives on Nintendo consoles, a unique opportunity to play three chapters of the successful series. The ability to play wherever you want is certainly an element not to be underestimated but it must also be said that among all the conversions, the one on Switch is certainly the version with greater compromises, due to the obvious technical limitations of hardware made in Japan. . If this doesn't scare you, run to appear the N. Sane Trilogy, Crash is waiting for you!
gameplay
Graphics
Sonoro
Longevity
Final judgement
Do you want to complete all the achievements and trophies and know all the tricks, guides and secrets for your video games? SoulTricks.com is a group of video game fans who want to share the best tricks, secrets, guides and tips. We offer the best content to be a source of useful information, so here you can find guides, tricks, secrets and tips so you can enjoy your games to the fullest. Are you ready to get all the achievements of that game that you resist so much? Enter and enjoy your favorite video game to the fullest!
F1 2017, Lando Norris at the wheel of McLarens in a new trailer ❯