Clash with Balloons, Bobombe knocked down, Guards and Thieves and much more.

Mario Kart 8 fans who have so far been clamoring for the introduction of the Battle Mode (which was present on the previous chapter for Nintendo 3DS) will be happy to know that the Kyoto house has finally decided to please them. Not only Mario Kart 8 Deluxe offers four classic modes already seen in the past, but the brand new one also makes its first appearance Guards and Thieves, a challenge that already from the name reveals its functioning.

If you want to know how to finish first in all modes, you are in the right place: we have created a new guide dedicated to Mario Kart 8 Deluxe. And don't forget that we have already published a first article on some tips and that our review on Nintendo's famous and charismatic racing game is already online.

And now warm up your engines: we will analyze all of them one by one Challenge Mode di Mario Kart 8 Deluxe.

Clash with the Balloons

It all started with the Balloon Battle, since the time of the challenges on SNES: now you can pop the opponent's balloons also in Mario Kart 8 Deluxe. On the contrary, we recommend starting right here, to practice with a very different style from the classic full speed races of the main mode.


The main purpose is to collect power-ups and then throw them at your opponents as if there was no tomorrow, stealing the balloons (which represent the opponent's "lives"). Even if you run out of a single ball, you can still continue playing, but your score will be halved. We must therefore be rather "aggressive" to be able to reach a decent rank. To slightly complicate the situation and to focus on a pre-established strategy, the new "double object" also intervenes, which allows you to exchange two powe-ups during the competition.

A useful tip for all kinds of challenges is to constantly monitor the game map. Playing in the company of other people it is advisable to learn and recognize the most skilled opponents and, if possible, keep to the langa safeguarding your score. Also by observing the pitch you can make sure that you do not end up surrounded by too many opponents at the same time.

The approach and the style of play are determined by the map in which you are going to face each other. Battle Stadium it contains a lot of narrow alleys that are easy to get trapped in, so try to avoid taking any path that you haven't yet made sure is clear or not. You could end up victims of a red shell. Other maps that can contain multiple floors or levels are Sweet Sweet Kingdom, Dragon palace e Luigi's Mansion. Knowing them is important, because in the ways in which you have to safeguard the lives of your character you can take refuge right on them to avoid the fight altogether, and always from there (if you are particularly bad) you can trigger a rain of fire on the enemies by arming yourself with bob-ombe.

And if you're lucky enough to get a feather out of the upgrade boxes, don't waste it - you can use it to dodge incoming attacks or as a weapon. By waving it over an enemy, in fact, you will make one of his balloons burst.

The battle royal concept remains unchanged, but in Bob-omb down there are however substantial differences in the style of play. Each object is in fact replaced by bob-ombs, which can be thrown beyond your kart or backwards, generating a certain area of ​​impact capable of hitting enemies. The scoring system is the same as in Balloon Battle and the balloons themselves are again present to represent the player's available lives.

To survive in Bob-omb at the tappero you will have to become even more aggressive. You know the Hunger Games? Well, the start of a match is somewhat similar to the beginning of the absurd competitions narrated by Suzanne Collins. Each power-up box contains bombs, and you can take up to ten of them with you. They seem a lot, but instead you will soon realize that they are few: throwing them left and right, all the players will run dry in a short time.

The areas where the power-up blocks spawn will be the hottest area of ​​the arena, where everyone will fire without distinction. So be careful if you are about to refuel or are about to run out of ammunition. Once again it is useful to carefully study the game map, which will tell you which areas are currently more dangerous than others.


Of course, you can also fire on areas where you see enemies starting. It is also a smart strategy those of drop the bombs backwards, following the movements of the pursuers with the rearview mirror (X button). If you play with a slow acceleration character (typical of heavy characters, such as Bowser), perhaps it is better to avoid crowding together with the others in the initial phase, to get the bombs like crazy. This is because others could beat you on time and inflict serious damage on you. So head in the opposite direction, looking for your personal source of supply. 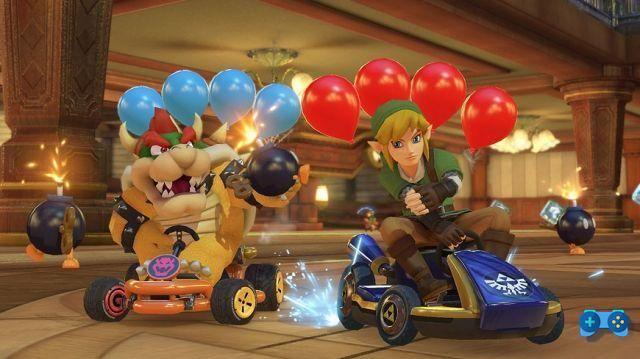 In this mode we will play in one of the two teams available. You guessed it, right? That's right: either in the one of the guards or in that of the thieves. In the first group we will have to reach and hit the fugitives with the piranha plants, in the second we simply run away within a certain period of time.

By catching the thieves, they will end up in a cell (where they deserve to be!), But if another companion of theirs manages to press a button next to it they will all be free and will run away again. All prisons and guards will be constantly displayed on the screen, but thieves will only appear if they are within a guard's line of sight.

The guards start the game equipped with piranha plants: their task will immediately be to get as close as possible to the thieves to "eat" them with the dangerous object of enhancement. Automatically, then, the unfortunate opponent will end up in the cell, completely useless to the game until another partner helps him. The game continues until all the guards have caught all the thieves. The best strategy is to reduce the thieves to the screen as fast as possible by catching everyone around. Each guard will have to dedicate himself to a specific goal, avoiding running randomly and in bulk. A strategy that is not always practicable online, especially in the absence of a voice chat.

It is also very important to defend the cells once they contain the thieves, otherwise it will be easy for their comrades to get the prisoners free. So, as soon as you notice on the screen that a thief has been captured, run to pick up an upgrade and stand near his cell, ready to eliminate anyone who dares to approach the button / mechanism with which the cage opens. If you play as thieves instead, well, the map will be your friend: the guards cannot see you until they have you in their line of sight, so run in the areas of the map that are more island, or narrow or suitable for hiding.

Here is an easy way to explain even to newcomers: there is a big giant sun somewhere, you have to catch it and keep it with you as long as possible. At the end of the game, whoever has had it with them the longest wins. If your opponent has it in your hand, pick up an object, throw it at him, make him lose possession of the sun and then take it yourself. Ta-dan.

An excellent strategy is to set aside a mushroom, an analogous object capable of providing you with a boost in speed, in order to use it when you need a little push because it is not far from reaching the sun. Grab it and then escape, using the power-up again to put some extra distance between you and the pursuers. And, while you might be tempted, don't waste time skirmishing with other players if they don't have the sun - instead focus on getting there as soon as possible.

This challenge was one of the latest additions to the series and focuses on a pure collection mechanism, as the name implies. You will have to collect as many coins as possible by attacking enemies or finding them on the game map. In theory things are simple, in reality the third world war is unleashed.

Of course, taking a look at the map is always important, and even in this case the objects of interest, or coins, will be shown on the screen in the form of yellow balls. However, since they will appear at the same time to all the players, everyone will want to rush to collect: therefore the best choice is not always to bet on the coins just generated on the map, but rather to ambush opponents.

Do you want to complete all the achievements and trophies and know all the tricks, guides and secrets for your video games? SoulTricks.com is a group of video game fans who want to share the best tricks, secrets, guides and tips. We offer the best content to be a source of useful information, so here you can find guides, tricks, secrets and tips so you can enjoy your games to the fullest. Are you ready to get all the achievements of that game that you resist so much? Enter and enjoy your favorite video game to the fullest!
Guide Pokémon Ultra Sun and Ultra Moon, use Ultra Arches, and capture all Legendary Pokémon ❯

Pokémon Bank, the complete guide to the first start

Mario Kart 8 Deluxe, all the news and how to unlock Gold Mario