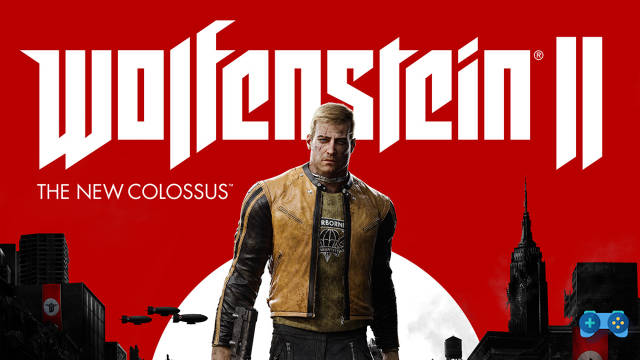 “If you take freedom away from the Americans, you are playing with fire. You're just throwing gas on it. " William BJ Blazkowicz

Wolfenstein's Ukronic world lives in an alternate reality where the Nazis won World War II. Technologically inferior to extremely well-equipped Germany, the Allies are facing an inexorable defeat. In 1946, a commando embarks on a last, desperate operation, headed by William BJ Blazkowicz. The mission doesn't go quite as planned and the good BJ ends up in a coma from which he wakes up only 14 years later. Now the world is literally "invaded" by fucking Nazis.

Wolfenstein II: The New Colossus, resumes the thread of the speech interrupted at the end of The New Order. Warning: SPOILER. Deathshead's defeat did not bring the desired results. The Nazis maintained and even expanded their control over the world. In particular, the United States is still and more than ever under the yoke of Hitler and his highly advanced troops. Blazkowicz, is not at his best, the clash with Deathshead, which took place on the Hammer of Eva (the submarine stolen from the Nazis), seriously injured him, we even feared his death and instead "Terror-Billy" has a hard skin and after a coma lasted 5 months, Blazkowicz is confined to a wheelchair.


After the death of Wilhelm Strasse (Deathshead), Frau Engel, secondary antagonist of the previous chapter, is promoted. Terribly disfigured, Frau Engel will do anything to capture and kill BJ

Welcome to the Nazi States of America

The New Colossus is an action-adventure first person shooter, focused on single-player mode. It follows the old FPS of the 90s, keeping as The New Order and Old Blood (the DLC) an old school structure and gameplay mechanics. The two main aspects of MachineGames production are narrative and gameplay. As for the narration, it remains at very high qualitative levels. It is not just about telling a drama, a story of death and global terror that ended millions of innocent lives. In fact, in even more massive doses than in the first episode, the black humor, the irony to put it simply that permeates the game is in total contrast with the Nazi totalitarian regime and its ferocious actions. 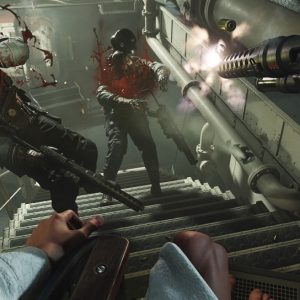 The events narrated, although surreal and bordering on the fantastic, have their own underlying coherence and also thanks to really brilliant ideas, the narrative plot turns out to be solid and convincing. The language, the events, the situations, in the Tarantine style, are all elements that are proposed to us without any filter. You never feel that one of the aforementioned elements is out of place or out of tune with the game context, indeed, every joke, every action, every word is designed to fit perfectly in Wolfenstein's uchronic world. Blazkowicz, our Nazi-killer, is a big man 190cm tall and weighs 111kg. He's been through a lot. Its goal? Not only to eliminate the Nazi scum from the planet, but to ensure that humanity and especially its future family can live in a free and just world. His character was characterized at best, let's say also in an excellent way. He is not just a blond-haired "Hercules", but an example of life. Never give up, always fight for what you love and believe.


As for the gameplay, The New Colossus takes up the game mechanics of The New Order. A frenetic FPS, a huge transportable arsenal, characterized by hundreds and hundreds of ammunition, health regenerable only in part and a considerable amount of enemies to be riddled with traditional and non-traditional bullets. The game itself is divided into two distinct parts, as mentioned, after a coma lasting 5 months, BJ will initially be forced to face the Nazi scum in a wheelchair and with a very limited amount of health. It's great to try the stealth approach in a wheelchair, it's not limited, far from it. We will feel comfortable leading old Blazkowicz to the Hammer of Eve to slaughter the Nazis. The "constraint" however will last for half an hour, after which, through a narrative choice that we will not reveal to you, our protagonist will be able to get back on his legs. 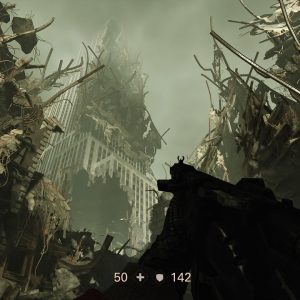 From now on, the game will give its best. Among the aspects that differentiate it from The New Order, there is certainly the map. We will not only have one road available, but also several possible alternatives. We will be able to sneak down the conduits and surprise an enemy behind, climb the ledges, marked by the yellow color and wait for the right moment to gut a Nazi or a supersoldaten by stealth, or decide to make our way with weapons drawn, aware of the fact that the enemy blows, if well aimed, will send us rights to the creator. Furthermore, it must be borne in mind that for ¾ of the adventure the approach with weapons drawn will not pay off; Terror-Billy's health will only be 50% compared to 200% armor.


The medkits, scattered around the game scenarios, albeit in good quantities, will not help us against armored soldiers, combat androids and drones, leading us most of the time to feel "cornered", almost powerless. Wolfenstein II, asks us to act silently, to better plan our moves and wait for the right moment to act. The enemies, albeit not brilliant from the point of view of artificial intelligence, when we trigger the alarm, will literally flood the screen. They will know how to surprise us behind us and even the Ubercommanders will know how to give us a hard time. To make things more interesting during the adventure, there will be three nice mechanical couplings. The constrictor compresses the chest allowing us to pass through tiny pipes, the ram, a sort of bodice, increases the brute force and finally the last, the bipod, extends our lower limbs, allowing us overhead approaches and terrorizing the soldiers for a fraction of a second. It therefore goes without saying that depending on the additional skills that these grafts will give us, the approaches and exploratory possibilities of the title will be different. 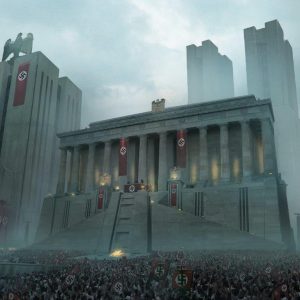 A struggle for freedom

Compared to The New Order, some have also been introduced side quests. By killing the Ubercommanders, we will get a part of the enigma code to be used aboard the Hammer of Eve in the Enigma machine to crack the code and know the exact location of the commander. From here then an animated interlude will start, which will take us on board a helicarrier or a small submarine to face the secondary mission. In addition, always aboard the "Mother Base" we will be able to get in touch with other characters, who will offer us various activities that will make us get rewards. The production, being a game designed for the single player, focuses a lot on replayability. In fact, after concluding the main campaign, we will certainly be encouraged to replay the title, to choose different approaches, to search for the many collectibles: star cards, Max's toys, sketches, gold, discs and cards of death or to discover some cutscenes related to the characters of Wyatt or faithful Fergus.

A weapon for every occasion

As for the paraphernalia available, we have 8 weapons: accepts them, useful in hand-to-hand clashes, from distance or to open the ducts, the faithful gun, which if enhanced through the appropriate kits, will allow us to add a comfortable silencer for stealth approaches, the Maschinenpistole machine gun, which can also be silenced, the Sturmgewehr, also very comfortable for long distance shots, the Schockhammer, a shotgun with three rotating barrels, the Kampfpistole single shot that fires explosive bullets, the Laserkraftwerk, not only very useful for opening grates and iron chests, but also for taking down armored enemies with a few shots, finally the Handgranate and heavy weapons, the latter we can obtain by shooting down enemies. 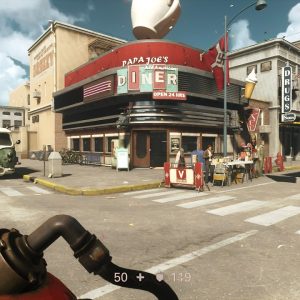 Each weapon, with the exception of those left by the enemies, can be upgraded, there are 3 slots available, with the appropriate kits scattered throughout the game maps. Each of them will help us in the difficult task of eliminating the Nazi scourge from the world. We approached the game at three different difficulty levels: Do not hurt me, Get under it e Now it gets serious. We must say that although the difficulty level was different, we found it very difficult to overcome some points. A little because of the scarcity of available shelters, a little because of the vehemence with which some enemies hunted us down and hit us with everything in their possession. Enemies have never been shrewd, they will tend to shoot at us and take cover behind the first available cover. They will not use encirclement tactics or the like and in fact it happened very often that dozens of Nazis literally lined up ready to be devastating from our mouths of fire.

The player's progression is also marked by talents (Stealth, Chaos and Tactics), depending on what we do, we will get additional bonuses. By killing a certain amount of enemies by stealth, we will be able to move faster from lowered, killing the Ubercommanders, in addition to having a portion of puzzle code, the alarms of the commanders will jam and take longer to be activated, killing enemies with axes, we will increase the maximum capacity of axes, killing enemies with heavy weapons, we will increase the ammo of the heavy weapons detached from the supports and so on. 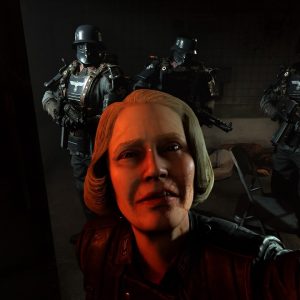 "First of all, know that I'm not a Nazi"

From a graphic point of view, Wolfenstein II: The New Colossus has nothing to envy to other productions. The engine used is the same as in DOOM and Dishonored 2, namely l'id Tech 6 which has allowed the developers to create truly valuable environments, characterized by impressive light and particle effects, as well as having led to a substantial step forward in terms of animations and shaders, far more convincing and realistic than The New Order . However, some of the problems of the past production also remain in The New Colossus, the presence of low resolution textures and polygonal models that are not always convincing is evident. The overall glance, however, is truly remarkable. We did not detect any particular bugs, except for some sporadic interpenetration and some soldiers who after a gunshot ended up 30 meters further on. From the sound point of view, the soundtrack is something sublime, each piece of music has been designed to be played at the right time. The dubbing in Spanish is of good quality, although in some jokes the good BJ seemed slightly subdued compared to other characters. The lip-sync, which is often out of sync, should be reviewed.

- Blazkowicz is in better shape than ever

Summary
Wolfenstein II: The New Colossus we can consider it as the perfect shooter. Old style, badass, rough, frenetic but at the same time: deep, touching and thoughtful. It is a real work of art, worthy of the best Quentin Tarantino, characterized by a satisfying gameplay and a brilliant plot full of twists, perhaps a little crazy and surreal but overall consistent with what happens in the world. Ukrainian of Wolfenstein. If you love the genre, if you love William Joseph Bazkowicz, known as Terror-Billy, you really can't miss this milestone of single player shooters.
gameplay
Graphics
Sonoro
Longevity
Final judgement
Yamamay, the Fashion Show collection available on the eShop ❯

add a comment of Wolfenstein II: The New Colossus review