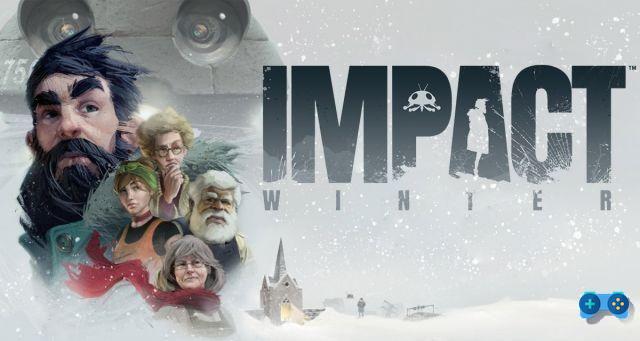 Winter is long over and you miss it the kids of Mojo Bones come to your rescue. In fact, in the past few weeks, after a rather complicated launch on PC just over a year ago, Impact Winter was made available digitally on both PlayStation 4 and Xbox One (version we tested).

No new content has been added, so here we will analyze the differences compared to what we had the opportunity to see and try in the release on Steam of 12 months ago. For everything else we refer you to our comprehensive review of the game.

Impact Winter will put us in the shoes of a named survivor Jacob, which, together with four other individuals, he formed a small team of survivors. But what happened? A meteorite hit the Earth, drastically changing the climate. The harsh temperatures, the absence of sunlight now covered by a thick blanket of clouds, hunger and the increasingly marked mental instability of the companions will lead our protagonist to do everything to survive.

There is a glimmer of hope, a disturbed radio transmission, intercepted by a small drone named Ako-Light, let the group know that help will arrive, unfortunately not before 30 days. Just the drone that is nicely called Ako, will assist our protagonist, illuminating his path, digging in the snow and transporting resources. They will think about it the members of our group, who will play a fundamental role.

Each of them will have specific skills that will allow us to increase our chances of survival. Wendy is dedicated to cooking, preparing excellent meals that will provide us with important bonuses, Blane, a veteran from Vietnam knows everything in terms of survival, Maggie specializes in mechanics and Christophe instead is the nerd of the situation, as he is very expert in technology and can improve our little Ako drone.

Each of the aforementioned characters, including Jacob, has five on-screen indicators that monitor as many fundamental states: hunger, thirst, energy, body temperature and mental health. Our decisions could drastically change the values ​​at stake. Time will pass inexorably and between a quest to search and collect supplies, between snow and ice, it is not certain that all the characters in the game will reach the end of the 30 days. The only possibility of Game Over, however, is given by the death of the protagonist. In fact, if one of the NPCs dies, the game will go on. The only limitation is that you will have to give up every element and improvement linked to that specific character.

Nothing has changed since last year

Impact Winter, although some choices and decisions are required, leaves a good deal of freedom to the player. However, the advice is to better weigh the decisions as they could have a significant impact on the continuation of the game and your survival. In particular, considering the console version we tested (Xbox One), the gameplay structure and the available missions are the same as the PC release. Each of the four NPCs will have a personal story that will give access to missions of various kinds depending on the role held.


Maggie, for example, will entrust us with tasks related to the strengthening of our makeshift shelter, through the collection of equipment and tools. By completing the missions, we will receive various rewards and we will also reduce the time it takes for help to arrive: the 30-day timer, in fact, will be reduced every time we discover new locations, we will complete the tasks that have been assigned to us and when we level up. Unfortunately, the major flaw of the production, already found on PC is the almost insistent repetition of certain events and situations that could sometimes be inconsistent with the survival component of the title.

At the base of the work done by Mojo Bones there is the Unity graphics engine, which behaves fairly well, offering good environments, an acceptable level of detail and a frame rate that is certainly improved but not always stable. Especially in the transition from one setting to another, a few frames are lost, nothing relevant is clear but we would certainly have expected more. Obvious phenomena of polygonal interpenetration and small really annoying bugs persist. The use of the controller, on the other hand, has drastically improved the gaming experience which unfortunately was the true Achilles heel of the PC version. The improvement is there but there is still a certain woodiness in the movements probably due to the lack of variety of animations present.

- Optimized compared to the PC version

Summary
If you have already played Impact Winter, buying the console version too would not make sense as the contents are the same. For those who have not had the opportunity to play the Mojo Bones title, we recommend the purchase only if you are really a survival lover. Most of the defects have been resolved compared to the unfortunate PC version but Impact Winter is a far from perfect product.
gameplay
Graphics
Sonoro
Longevity
Final judgement
Nintendo Switch Pro could take advantage of Nvidia technology ❯