Road to the Final.

We are almost there: in just over 40 days the fifteenth edition of the European Football Championships that, almost twenty years after the extraordinary edition of France '98 which crowned Zinedine Zidane's Blues as the 6th National to win the "Coupe du Monde" as host, they will be played again in Transalpine territory.

Football video game fans, or better than Pro Evolution Soccer 2016, have a "preview" the opportunity to lead their national team to conquer, albeit only virtually, the Henri Delaunay Cup (named after its inventor).

Konami, unlike Electronic Arts when it had the exclusive rights to the competition, it has decided to offer its fans, owners of a copy of PES 2016, the opportunity to play full-bodied DLC totally free, while for those who do not own a copy of the game the price of Euro 2016 in physical format (in a sort of edition GOTY also containing PES 2016) is of 40 €.

The "package" includes the updates of all the squads of the teams present in the game, improvements regarding the faces of different players, the kits of the teams among which we have Empoli and Udinese, the introduction of the official footballs of Euro 2016 and of UEFA Champions League, now “historic” exclusive of the Japanese title, and finally various official boots among which the NIKE Hypervenom Phantom II and the PUMA evoSPEED SL stand out.


Euro 2016 maintains all the characteristics that we have substantially analyzed and reported already in our REVIEW, several months ago, of PES 2016; unfortunately, also this time, the title created by Konami presents many lights but also many shadows, especially as regards the missing licenses that have characterized the Japanese series in a negative way for years. And it is quite strange to say since it is the "official" game of the Europeans.

The national teams with official license turn out to be only 15 out of 24namely: France, Italy, Germany, Wales, England, Spain, Portugal, Northern Ireland, Turkey, Iceland, Croatia, Czech Republic, Slovakia, Albania and Ukraine. So forget Sweden and above all the very favorite Belgium which, we must say, does not have any official license even in FIFA 16.

A real shame for those, like me, who hoped to have a 101% official title and who, once again, turn out to be literally castrated. For the rest, the graphic elements on the screen, a very lively and really well-made pre-match presentation, almost as if we were watching the match live, the ball and the official trophy manage, in part, to make up for the relatively shortcomings. to the national licenses present in the game.

Then accessing the Competition, distinguished by all the menus created using the logos and graphics of Euro 2016, it is well structured and substantially faithful to the real counterpart, with the presence of well six elimination rounds, each consisting of four teams. Teams that, of course, mirror the groups drawn in Paris last December 12 with the direct qualification to the knockout phase for the top two teams and the repechage for the four best third-placed national teams. 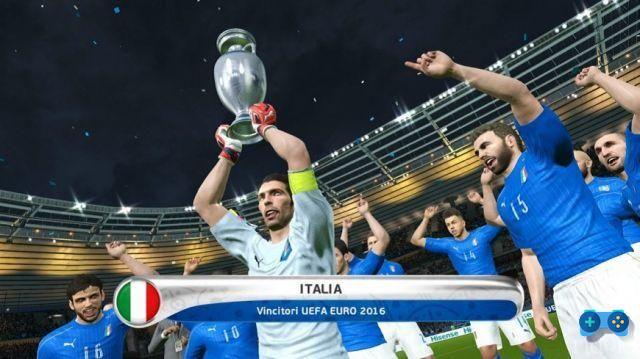 As in PES 2016, also in Euro 2016 the FOX Engine it is certainly the feature that stands out most in the eyes of the players and also of those who, in passing, take a look at the screen. Nothing to complain graphically: the graphics engine turns out to be very solid and the work done by Konami is really of the highest level. There is the usual presentation in the tunnel of the locker rooms, the entry into the classic field accompanied, for the occasion, by confetti and festive choirs to best welcome our heroes, national anthems with footage of each player and a whole series of animations that will catapult us into the match.

even the gameplay appears to be almost unchanged except for the addition of new animations, in particular for goalkeepers and for the most important players such as Cristiano Ronaldo, which in all its movements and celebrations turns out to be a real "clone" of its real counterpart. Everything seems to work pretty well, the changes of direction turn out to be very natural even if the "less famous" players have not received the same meticulous attention from the Japanese software house as the so-called Top Players, so they have a tendency to move (one more time) like little robots.


Sore point, at least at the lower difficulty levels or in any case Normal, is given by Artificial Intelligence not always brilliant: on more than one occasion, indeed, it is possible to win corners or recover balls in a too simplistic way and consequently go to goal without any problem. By increasing the degree of difficulty, however, even the AI ​​will tend to better manage the actions during the game, sometimes resulting even dangerous and a little difficult, weaving really good and reasoned game plots.

For the rest, it does not change much compared to PES 2016. Some improvements have been made to the insertions of their strikers, in fact it happened very often to send my striker into the goal with soft swipes or through passages but going to collide with the goalkeeper, who turns out to be always very reactive and prepared for our shots. Good reactivity of the defenders, who in attack situations behave well going most of the time to double the opposing player in order to stop the dangerous action. The game physics, on the other hand, is still too favorable to the more "physical" players who, essentially, 90% of the time will win.

Furthermore, the commentary has been revised and new phrases have been added to the duo Fabio Caressa e Luca Marcheggiani, but despite this it always turns out to be dull and very flat, especially because most of the time the same phrases will always be repeated. Also the camera has been updated, not so much as regards the actual gameplay, but as regards replays and situations that will be practically re-proposed during the real competition on June 10th.

Definitely Konami's choice to release Euro 2016 in free format it is to be appreciated; the work carried out does not appear to be such as to justify a paid DLC and undoubtedly the Japanese company is aware of it, for this reason it has therefore decided to "reward" the owners of PES 2016 through a free update. Euro 2016, as you will have understood, is not perfect, on the contrary; but tell me everything you want, however Pro Evolution Soccer, thanks to the official licenses, in this case for the European Championships but also for the UEFA Europa League and the UEFA Champions League, always manages to convey that something extra that is still missing in a almost perfect title which is FIFA 16.

At the same time, the lack of 9 national licenses, as well as the presence of only one official stadium, that is Stade de France which will host the final on July 10th, they turn up their noses a little, but who, like me, grew up on bread and PES since childhood, is more than used to it and will not particularly miss it.

Do you want to complete all the achievements and trophies and know all the tricks, guides and secrets for your video games? SoulTricks.com is a group of video game fans who want to share the best tricks, secrets, guides and tips. We offer the best content to be a source of useful information, so here you can find guides, tricks, secrets and tips so you can enjoy your games to the fullest. Are you ready to get all the achievements of that game that you resist so much? Enter and enjoy your favorite video game to the fullest!
God of War HD, the first chapter free today for Playstation Plus users ❯

Resident Evil 7 Biohazard, new information on the DLC End of Zoe and on Not a Hero

Bioshock, the next episode could be Open World