How to take screenshots on iPad, iPhone and Mac

Many are wondering how to take screenshots of theiPad? the system is there and it is very simple and immediate and it works with any application and whatever is on the screen at that moment.

We just have to press the Home button and the On / Off button at the same time, we will hear the classic click of the photo shoot and the screen, for a moment, will show a white flash.

Now the captured screen is inside the app Images, exactly as if we had taken a picture with the device's camera. The same procedure must be performed if we have a iPhone. 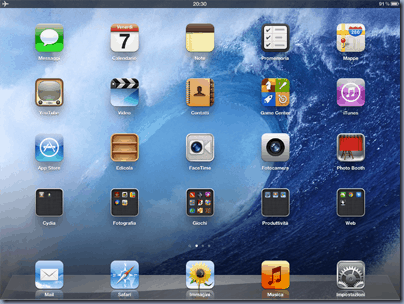 As regards the Mac the screen capture can be done through the combination of keys cmd + shift + 3 on the keyboard, a png image with the desktop photo will be saved on the desktop and the correct execution of the capture will be signaled by the sound of the camera.


To capture, instead, single portions of the screen, you need to perform the combination cmd + shift + 4 on the Mac keyboard by marking the area of ​​the desktop to be photographed with the mouse.

How to take screenshots on Samsung smartphones and tablets ❯

Android camera not working? Here's how to do it

Best Dual Sim smartphones 2022: which one to buy

LG G2: the smartphone with the buttons on the back

How to make and save screenshots with Huawei Honor

Add a comment from How to take screenshots on iPad, iPhone and Mac

Do you want to complete all the achievements and trophies and know all the tricks, guides and secrets for your video games? SoulTricks.com is a group of video game fans who want to share the best tricks, secrets, guides and tips. We offer the best content to be a source of useful information, so here you can find guides, tricks, secrets and tips so you can enjoy your games to the fullest. Are you ready to get all the achievements of that game that you resist so much? Enter and enjoy your favorite video game to the fullest!