God of War PS4 guide: armor, stats and how to get the Mist Set 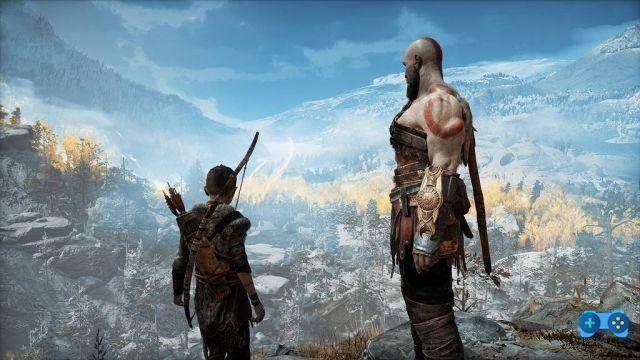 We upgrade Kratos to the maximum and face the Norse gods.

As you may have verified for yourself by reading our review, the latest installment in the God of War franchise it is a real masterpiece; and this is the first God of War PS4 Guide of the many that we plan to make. The merit is undoubtedly also that of having introduced, in mechanics that are already frenetic and satisfying in themselves, a very respectable role component. Just like in a self-respecting RPG, in fact, in the last chapter of the Kratos series can be equipped with various pieces of armor, which in turn are enhanced, modified and changed as the main storyline continues.

By the way, if you are looking for other God of War themed guides you are in the right place. Here's what's currently available on Soultricks.com:

Continuing the adventure against the Norse gods, and even after the completion of the game, it will be possible continue to farm materials and to get their hands on more and more powerful armor; same goes for spells and abilities that can be learned from Kratos and Atreus. In this guide we will explain how Kratos' stats work, what are the best pieces of equipment to find and put on him, and we will also spend a few words on the basics of combat in the new God of War.

Basically Kratos will begin his journey in the company of his son Atreus equipped with the minimum necessary to survive the first clashes against the fierce enemies that he will find in front of him. This means that, as soon as possible, it is good to take a look at the inventory and study it in detail, to know how every single slot in the equipment supplied to the Ghost of Sparta works. 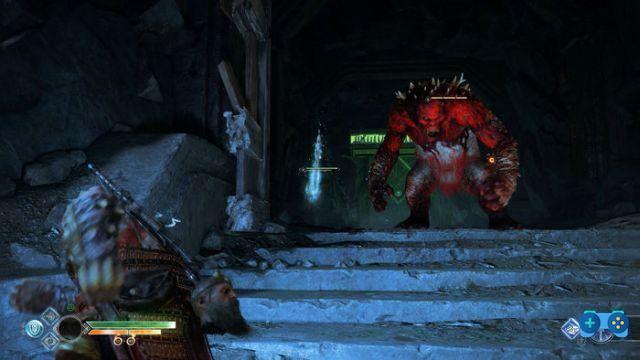 Kratos can have three pieces of armor equipped at the same time: the armor of the bust, the armor of the arms and the armor of the hips; Atreus, on the other hand, can only equip one garment, and we will have to craft it for him, like our own components. You will immediately notice that each piece of equipment you will find (or buy) is marked with a precise color, which indicates its rarity, according to the following legend:

Regardless of their rarity, having the right amount of resources each piece of armor (torso, hips and arms) can be upgraded, bringing it to level "+". Usually the upgrade grants the equipment an additional bezel. In fact, each piece of armor can contain from one to two bezels, inside which we can place gems that guarantee additional bonuses to the Spartan: improved statistics, passive bonuses or active bonuses. 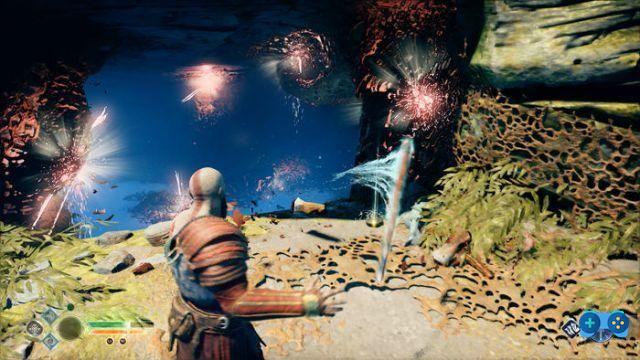 The color of the gems to be set is the same as the armor: therefore it is advisable to equip especially purple and orange gems. Just to give a very simple example, some of them grant defensive bonuses against frost, fire or poison (passive type).

We explained to you that each piece of armor will increase Kratos' stats by a certain number of points. This is because the RPG elements introduced by Santa Monica Studio to the franchise also figure a new system of non-linear progression for Kratos. Our favorite Spartan becomes stronger and stronger, but to do so it will be important not only to accumulate experience points, but to equip the right tools (weapons, armor, gems and talismans) always and constantly under control the parameters of the character, which we analyze in detail below.

All of these parameters can be checked at any time (even in battle) by lightly pressing the touchpad and scrolling through the menus to the one showing Kratos' equipment. Of course, every player will feel more comfortable with a given build for the Spartan, and we must also keep in mind that no matter how powerful they may be, none of the armor sets available guarantees a boost to all stats at the same time. Regardless of this, in all likelihood the best armor set in God of War is that of the Fog, and now we explain how to get it.

God of War hides two secret Kingdoms: Muspelheim and Niflheim, both of which can be unlocked by finding some chests that contain the respective language codes of the two worlds. We are telling you this because to get the most powerful armor in the game, that of the Mist (or Set Mist) you will have to go to Niflheim. Keep in mind, before embarking on the undertaking, that it will not be an easy task and that there will be several steps to complete. But let's go in order.

The Armor of the Mist consists of three pieces: torso, arms and hips; each piece is basic at level 7 and can also be upgraded. The more pieces of the Mist Set you wear at the same time, the greater the speed in Kratos' health regeneration, not a bad detail. Not to mention that the Fog Set limits the terribly negative effects of the cursed fog in Ivaldi's laboratory, also on Niflheim. 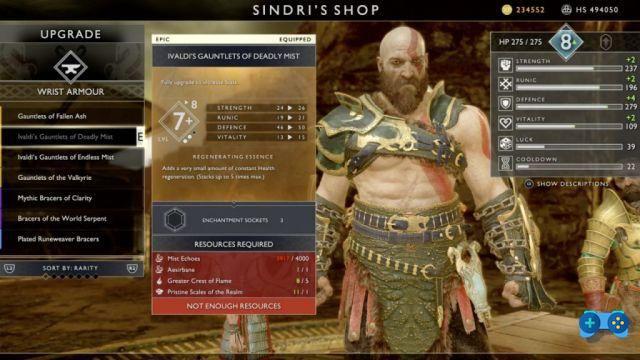 In order to get the armor, go to Sindri's shop and accept his mission related to Ivaldi's laboratory. Then enter the laboratory: it is a game area that will change its appearance and enemies every time you enter it, some sections are very dangerous and above all the cursed fog that envelops the places will consume a new bar on the screen. When the fog resistance is completely exhausted, it will not end well for Kratos and Atreus.

After collecting 500 misty echoes in Ivaldi's labyrinth (without dying, or you will lose all the echoes collected), return to Sindri. Our advice is to collect some, then get out of the maze and "save them", to then return. In this way the intermission loads will always be safe, you will never lose them in the event of death. With 500 misty echoes Sindri will forge the key to access Ivaldi's laboratory: from here on, all you have to do is loot the laboratory loot and concentrate on searching for many, many misty echoes, until you have enough to forge the Armor of the Mist.

If you still have doubts about any aspect of the new God of War, our staff is available to answer your questions also on Facebook: send us a message!

Do you want to complete all the achievements and trophies and know all the tricks, guides and secrets for your video games? SoulTricks.com is a group of video game fans who want to share the best tricks, secrets, guides and tips. We offer the best content to be a source of useful information, so here you can find guides, tricks, secrets and tips so you can enjoy your games to the fullest. Are you ready to get all the achievements of that game that you resist so much? Enter and enjoy your favorite video game to the fullest!
Strictly Limited Games announces Darius Cozmic Revelation ❯

Add a comment from God of War PS4 guide: armor, stats and how to get the Mist Set