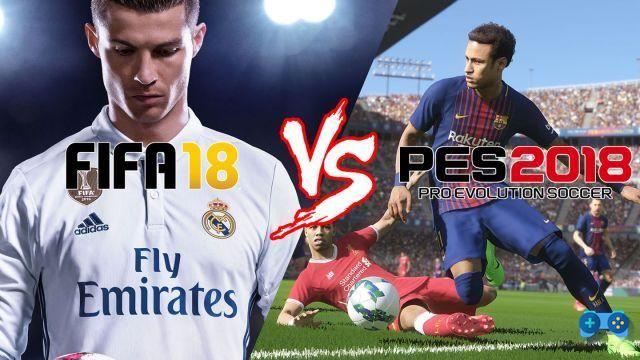 We are back on the football field!

Here we go again, an exciting new football season has begun. Frozen beer, snacks and sofa, for those who do not have the habit of attending stadiums in any weather condition, represent real rituals to be held unquestionably every Sunday afternoon. A little less certain, on the other hand, concerns the choice, at least for gamers who are passionate about football simulations, on which title to choose between FIFA and PES.

For about three years now the rivalry between the two has made itself felt again, as after several years of abyss, Konami has managed to get back on track, presenting a series of chapters "Pessian" really not bad. On the other hand, Electronic Arts certainly did not stand by, implementing not only new game modes but updating its graphics engine to the more realistic Frostbite. Now, we at Soultricks.com, will try to have our say regarding the upcoming PES 2018, which will be available in the middle of the month and FIFA 18, instead of being available later this month.

Let's start with the graphic engine that characterizes the two titles. Before Electronic Arts implemented his Frostbite, Pro Evolution SoccerWhile it didn't shine for gameplay, it still managed to maintain a certain advantage in terms of visual quality and pre- and post-race presentation. Now this difference has narrowed considerably, in that FIFA 18 can count on a spectacular graphics engine, the result of the hard work done by the developers who, after the first "experiment" with FIFA 17, this year have learned to take full advantage of the new engine. The new Real Player of FIFA 18 introduces Real Player animation technology. The system responsible for the greatest evolution of game features in the history of the series. This innovative system unlocks a new level of responsiveness and player personality. Now Cristiano Ronaldo and the other champions move exactly like on the real field.

PES instead offers its flagship, or the Fox engine accompanying several Konami titles. The Graphic Engine has now reached its maturity and Konami herself has declared that the level of realism achieved thanks to Real Capture is truly amazing. Benefits include photorealistic stadium lighting for day and night matches, sports fields and changing room tunnels recreated from more than 20.000 complex elements collected at the Camp Nou and Signal Iduna Park. Various players were analyzed with motion capture in realistic settings, allowing a complete overhaul of the animation system, starting with basic movements such as walking, turning and body posture. The models of the players are even more varied and detailed with a special attention to how the game uniforms fit on different physicists.

On this point, in addition to telling you that both titles are in great shape, we cannot advise you which of the two to choose as the choice is purely personal.

First of all, we must remember that the two titles start from two different premises. Although they have some points of contact, they also have many differences. We will not dwell much, just consider that always, FIFA was born as a simulation title, many might turn up their noses, considering the turn that the Electronic Arts title has taken lately, but like it or not, the goal has always been to create a full-fledged simulation. Tactics has always been a cornerstone of every match and the careful management of it, momentum aside, can change the fate of any match. PES discipline instead è par excellence a more arcade title, which leaves a lot of freedom to the player, limiting tactics to a minimum. It is also true that even this difference, starting from last year, has been slightly limited. The action is now more reasoned and complex and the new set-piece management systems implemented in PES 2018 are proof of this.

Now we will move on to analyze what are the peculiar characteristics of the new PES 2018 and FIFA 18. 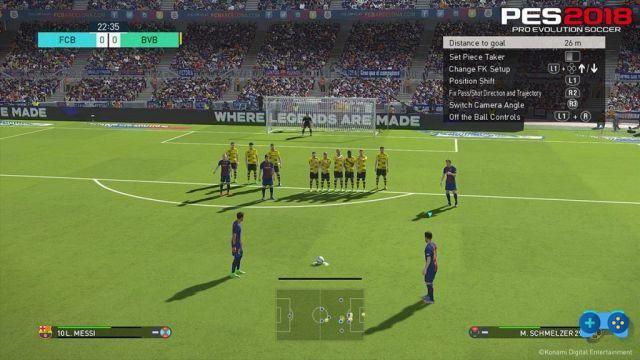 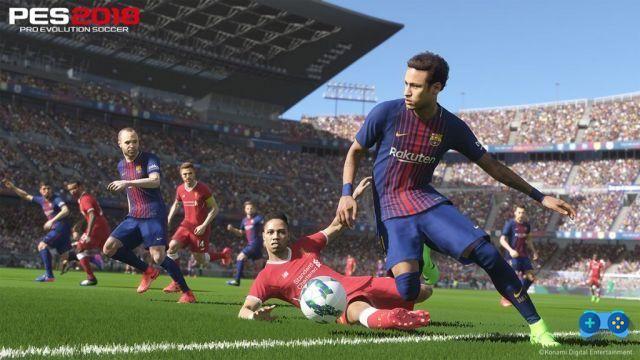 FIFA has undergone significant changes when it comes to gameplay. Now the pace of the game turns out to be even more staid and reasoned which favors more the physicality and less the speed of the players. The feeling of control of the team has remained substantially unchanged, but it will be necessary to adapt to the new rhythms of the game on which the new FIFA 18 is based. The slowness of the movements, the greater strategic component of the matches and a more physical control system, certainly represent features not to be underestimated. We do not yet know if they will be able to keep their quality unchanged for the 90 minutes of the game, it is still early to say, but surely Electronic Arts is not afraid to dare.

Electronic Arts has already given a dusting of the game modes present last year, thanks to a mode FIFA ULTIMATE TEAM renewed, the weekly FUT Champion's, the Challenges and the "The Journey”That this year will see us again wearing the shoes of the talented Alex Hunter. In particular, the chapter structure, with short-term objectives, provides Alex Hunter with new stimuli as he faces the second season of his promising career. He will have the opportunity to try his hand at various competitions in the main leagues around the world.

Among the new features in FUT we have:

PES 2018 instead introduces the cooperative mode 2 against 2 and 3 against 3 that fans have been asking for a while, new features in myClub and in the historical Master League: 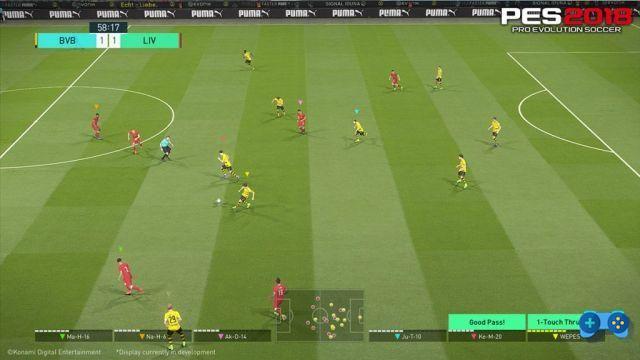 Ability to compete in eSports challenges with myClub.

New features available including a database that will aid in the search for a specific player, history of previous auction results and Automatic Bidding functions for the final bidding phase.

Form your CO-OP team with your team united with that of your friends. Cooperation is a key element in the strategy that leads to victory. Only for PS4, Xbox One, and PC

At the beginning of the season you will be given a series of objectives and challenges, based on the potential of your team, it will be important to achieve these results in order not to lose your job

Play against the big teams before the season begins.

New appearance of the menus across the various modes, with the inclusion of pre-match interviews in the important challenges and images from the changing rooms
Only for PS4, Xbox One, and PC

By popular demand, this mode returns with even more gameplay options and new graphics. Choose the criteria for the players you want and play with the players selected for your team.

Once you own your players, try out some negotiation for the players you want to trade while keeping the non-transferable players, putting your strategic skills to the test. 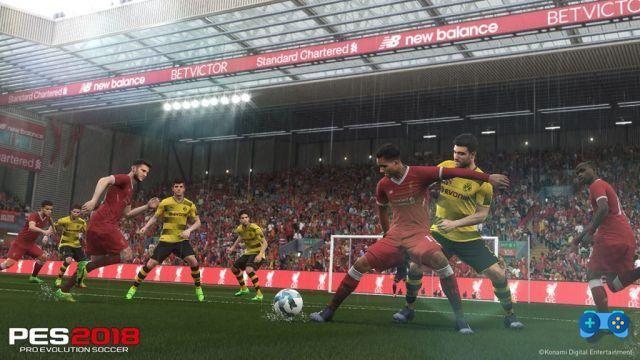 As for the licenses, FIFA once again wins hands-on having practically fired all the major leagues. Of course Konami has again managed to make rather important agreements, in addition to Barcelona, ​​Borussia Dortmund and Liverpool, 5 other teams have been added including Valencia, Porto and Inter and the stadiums have gone from 30 to 36. Oh let's not forget the Champion's League and Europa League, which once again are exclusive to PES. There is still work to be done but the direction taken by Konami is the right one.

This year the challenge is really tough, PES has introduced many new features, while keeping faith with its arcade spirit, Konami has also sought a more simulation-oriented approach. There is less of that sense of intricacy than in the past, but there is still a lot to do to obtain the freedom of movement that offers the direct rival. The game action is more reasoned and the new set piece tactics promise truly uncertain outcomes. Electronic Arts on the other hand, has not revolutionized its formula, the most tangible improvements are related to the graphics engine, now the glance is truly remarkable and to an even richer and deeper FUT mode than ever before. Which one to buy then between the two? It would be easy to say: "buy what appeals to you" and we would close the matter. But no, we really want to tell you ours and therefore we say FIFA 18, as it convinces us more than a PES 2018, which despite having all the cards on the table, also seems to have too many new elements and we do not know if overall they will be able to work all perfectly.

Do you want to complete all the achievements and trophies and know all the tricks, guides and secrets for your video games? SoulTricks.com is a group of video game fans who want to share the best tricks, secrets, guides and tips. We offer the best content to be a source of useful information, so here you can find guides, tricks, secrets and tips so you can enjoy your games to the fullest. Are you ready to get all the achievements of that game that you resist so much? Enter and enjoy your favorite video game to the fullest!
Trophy Guide: Bloodborne ❯

The game of solitaire, an icon of the past