Despite being acclaimed by many parties, Batman Arkham Knight has had quite a few problems since the day of its debut on the market. The reason? A PC port born under a bad star and that has not yet found the way out of the tunnel of poor optimization. Initially entrusted to the care of Iron Galaxy Studios, a developer who had already ported Arkham Origins to Windows, the Warner Bros. title immediately lent its side to numerous criticisms: several graphic glitches and the inexplicable absence of settings advanced are accompanied by an often unstable framerate, even in relatively calm situations. All problems that made the excellent home console versions look good and led to the withdrawal of the game from the Steam marketplace. The guys from Rocksteady Studios immediately got to work on the latest chapter of the saga, releasing patches on repeat and working for 5 months on every aspect of the game. On October 28, 2015 Batman: Arkham Knight is finally back available for download and, after more than a month of testing and the arrival of new patches, we are back in Gotham to tell you what the Windows version of the game looks like today.

We can say right away that the work done by the British developers has not been flawless despite the time spent refining the port. Thanks to some endemic problems of Unreal Engine 3, Batman: Arkham Knight continues to have difficulties on many PCs, so much so that Warner Bros. has decided to offer a full refund to anyone who bought this version of the game (physical or digital), regardless of the hours actually played. Certainly a commendable initiative, which however does nothing but certify a situation as serious as few. In the course of our test, however, we tested the new Batman on two different configurations, one of the other range and one with less pretensions, similar in performance to what the current generation consoles can offer. Without devoting more time to gameplay and history (find all the information you deserve, and you need, in the excellent review by Arturo), here we will talk extensively about the innovations introduced with the various patches and how the game behaves. on PCs that are so different from each other.

Let's start immediately with bad news for all those who had upgraded their PC in view of the release of the game. Despite the promises and the many months of work, Rocksteady finally gave up: no SLI and CrossFire support for Arkham Knight. The reason, according to the words of the Warner Bros. community manager, is to be found in the problems that could afflict all players following further changes. However, the new patches have improved the situation and in the last month we have seen a steady increase in the game's performance. Starting from the level of customization of the experience, which has benefited from the addition of the much desired advanced options: you can now act on all aspects of the game, from the cap to the framerate to the filters, passing through the NVidia Game Works settings. A convenient indicator then shows us the load that each setting will bring to the VRAM. 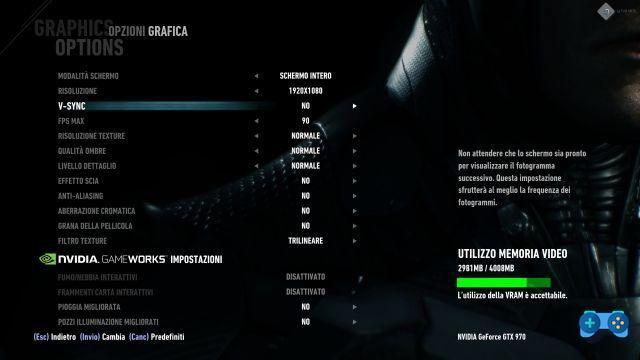 Moving on to the actual test, however, the indicator is not enough to make us obtain adequate performance: at 1080p our high-end configuration cannot guarantee us a stable 60 frames per second., despite the absorption of graphics memory is much lower than the 4GB at our disposal. In fact, screen tearing is always very present and forces the use of V-Sync with any setting. By maximizing the graphic detail, with all the effects active, we then experienced frequent and rather heavy drops, with drops down to below the 30 fps threshold.


Fortunately, we have not encountered any of the many glitches reported over the months, but it remains difficult to justify the lack of fluidity even with medium-level textures. These didn't seem much inferior to the high quality ones, but getting to have to use lower quality textures seems like an excessive compromise to achieve the standard 1080p 60fps with this first configuration.

Moving on to use the second configuration, the draw with the console versions was not easy at all. To do this we tried to move the game installation to SSD to speed up data streaming and to increase virtual memory to 12 GB. The result satisfied us halfway: at 1080p we managed to reach 30 frames per second of the PlayStation 4 and Xbox One version, rather stable even during the phases on board the Batmobile. This result, however, cost us the lowering of the resolution of the textures to a minimum (on consoles they are instead of normal quality), of the shadows and of the level of detail. Even so, some sporadic drops towards 25 fps continue to occur and doing without V-Sync remains a utopia, but at least there are no more shots that could be experienced at the time of release.

However, the general technical value remains excellent: the title makes extensive use of particle effects that push the game engine to the limit, within a vast, detailed and full of life map. Even if there is a slight demographic decrease compared to what the series had accustomed us to. The sound is finally confirmed in great dust, especially if you can count on a good quality stereo system.