Welcome to the world of racing simulations

The market for racing simulators, both on consoles and on PC, has never been as thriving as in recent years. Titles like Project Cars o Race trim, whose console version is almost upon us, have substantially rewritten what is legitimate to expect from a simulation title, offering a degree of realism never seen before and partially comparable to that of the simulators used by professionals in the sector.

However, the biggest obstacle to a full simulation, both on consoles and on PC, at least for those who were not able to face major investments, was the absence of a steering wheel that was at the same time economical, or offered in the range of price under 200 euros, but reliable and precise like the most expensive models or almost. At least until now, because with this T150 Thrustmaster aims to offer even these players a device that has little to envy to the more famous steering wheels offered by the same manufacturer, such as the T300, or those of other companies such as Logitech or Fanatech. 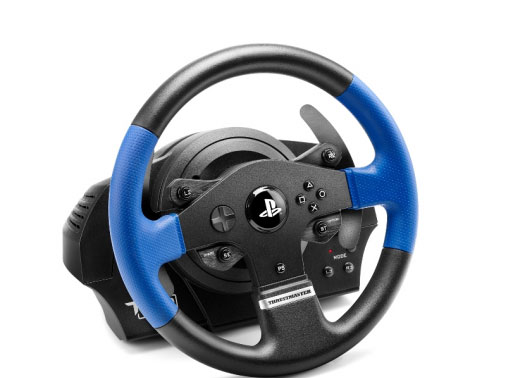 Thrustmaster T150 is a solid and sturdy steering wheel that resumes the lines of the award-winning T300 (the cost of which is currently over 300 euros) both in design and in the layout of the buttons needed to navigate the menus. L2 / R2, as well as the Option and Share ones, are easily accessible with your thumb while holding the steering wheel, while to access the DPAD you just need a small movement of the hand. The L3 and R3 buttons, on the other hand, are positioned on the base of the steering wheel, where the Mode button and the PS3 / PS4 switch button are also located. As we said, the T150 borrows from its older brother T300 the chipset that allows you to make the steering wheel compatible with both a PS3 and PS4, while maintaining all the functionality of the buttons on the steering wheel and without the hassle of having to connect a DS4 controller as for the predecessor T100. . This is a great addition that makes the wheel very versatile, even for those who are still tied to GT7 and plan to switch to the new Sony flagship only in the coming months.

The steering wheel appears solid and robust, also thanks to the particular conformation of its base and the good quality of the plastics used. The levers on the back are painted metal and the spring that controls them is incredibly responsive. The materials and the thickness of these also give importance to the entire steering. The steering wheel upholstery features perforated blue rubber inserts only in the part most in contact with the hands and guarantees good grip even with sweaty hands (In the "Ferrari" version, the inserts are in red with the prancing horse acting as the central logo ). The central plastic, on the other hand, is not the best but still makes a good impression, while the rather small dimensions (the diameter is just 27,96 cm / 11 ″) give the steering wheel a sporty appearance. The steering wheel is fixed to the table, or to the platform that you will use as a cockpit, with a rather cumbersome system that we found really uncomfortable. It is a sort of press at the two ends of which two suction cups are fixed which should ensure greater stability. The bracket will then be held in place by a screw. The particular conformation, however, makes this fixing system uncomfortable and not usable everywhere, leaving out for example the desks that have a step between the front and the top and forcing you, in these cases, to buy a specific stand. 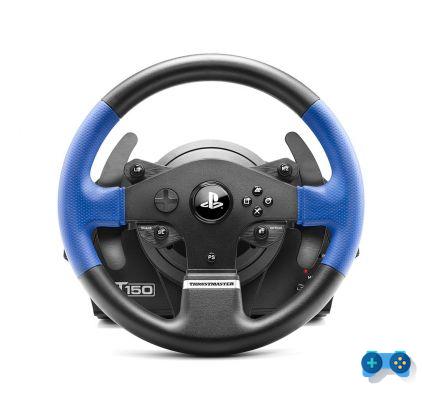 The two-pedal pedal set is built in a good quality plastic; the brake and accelerator pedals have different heights and inclination (adjustable) and are able to offer good resistance during the pressure, which is differentiated for the two pedals: stiffer and progressive for the brake and lighter for the accelerator . The resolution of the pedals is 10bit, which guarantees a good precision in the dosage of the braking or accelerator, although a certain dead zone is evident that it is necessary to get used to.

The grip of the pedal board with the floor is not perfect and it could happen that it slides forward if you have an “elongated” riding position and not perpendicular to the pedal board. Fortunately, the pedal board can be replaced both with that of the T300, and with other professional pedal boards having the same RJ45 connection. 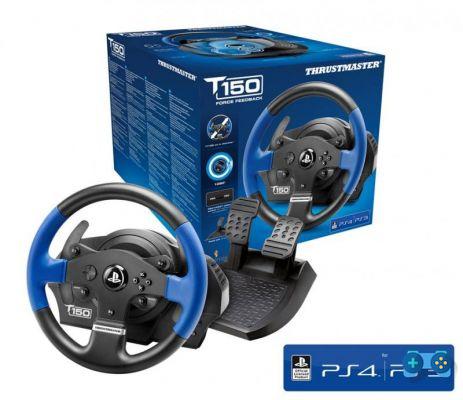 
The best part of this wheel is definitely the technical component. It is in fact a steering wheel with 180 ° rotation and force feedback with belt motor and gears. The T150 also has a proprietary system called TouchSense Immersion with a variable rotation angle between 280 ° and 1080 ° and one 12-bit resolution (competing devices like the Logitech Driving Force GT stop at 10), capable of reading up to 4096 values ​​on the axis of rotation of the steering. This value indicates how many positions the steering is able to detect from lock to lock, so the higher the resolution and the identifiable points, the greater the precision and accuracy of the steering, as well as, to use an inappropriate term, the smoother driving. . To give an example, imagine setting the steering with a rotation of 1080 ° (3 times 360 °): on this imaginary wheel you will have to mark 4096 points, which will represent the single points of the matrix that can be identified by the steering while driving. If compared to the T300 the difference is evident having the latter a resolution of 16bit, equivalent on our imaginary wheel at 65.000 points value. However, the impact of the higher resolution on in-game driving is practically nil, noticeable only if one were able to rotate the steering wheel by less than 0.8mm (the difference between the 4096 points identified by the T150), which is practically impossible. Not to mention the fact that most of the simulation titles available on consoles or PCs would hardly be able to feel such infinitesimal variations in steering.

Il Force Feedback is fast, accurate and quiet and able to offer an extraordinary sensation of immersion already “out-of-the-box” with titles such as Project Cars (PS4) or Assetto Corsa (PC). A few more settings, on the other hand, are needed to make it usable in Driveclub.
The resistance offered by the Force Feedback is good but not exceptional and certainly not comparable with that of the T300 or other more expensive steering wheels, entering in direct competition with the Logitech Driving Force Gt, on which it wins in almost every other respect. Particularly relevant in this case, what is defined in jargon the internal drag, i.e. the resistance offered by the internal mechanism during steering, before the force feedback is activated. This resistance sucks power from the force feedback motor by returning weaker torque to the steering. In any case, this is a result that is certainly superior to what has been seen so far for other steering wheels in the same price range or even slightly higher.