How to jailbreak Nokia Lumia

The term jailbreak it means evasion, and therefore the possibility for users to overcome all those limits imposed by smartphone manufacturers. By doing so you can install official apps or even act on the entire operating system of the device. The modding of Lumia is certainly a less widespread phenomenon than that of Android, but if you are interested in jailbreak Nokia Lumia 520 or many other Lumia phones (even the latest generation ones) then take a few minutes of free time and read carefully. 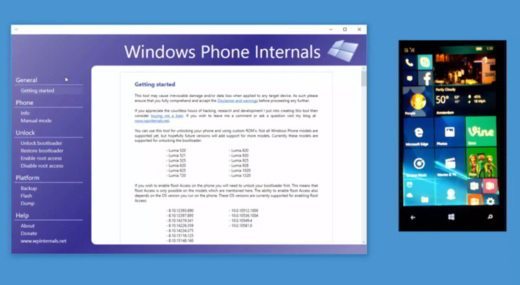 With Windows Phone Internals you can make full backups, unlock bootloaders, enable root permissions, restore the ROM, flash custom ROMs, install apps with root privileges and pirated apps, enable the display of the phone as mass memory and access the file system from your PC and much more.

WPI developer and XDA user, Heathcliff74 not only has it made the latest version of the app available to everyone but explains step by step, to expert and non-expert users, the use of the tool with videos that illustrate the introduction to the use of Windows Phone Internals and how to create a Custom ROM with ROOT privileges.

jailbreak Nokia Lumia you will first need to download Windows Phone Internals from the section Downloads of the official website. Then connect the Microsoft smartphone to the PC via the USB cable. Go to the section Download and download the file ff of the firmware of your device.

Move to Manual Mode and click on Switch to Flast-mode. From Unlock bootloader, in the left column, then click on the button Unlock.

How to create a Custom ROM with ROOT privileges

How to hard reset the Galaxy ❯

add a comment of How to jailbreak Nokia Lumia