Until recently, those who wanted to comment on a post had to be careful what they wrote in the message test, since once the comment was posted, no more changes could be made.

The new correction functions in Facebook allow you to edit comments even at a later time. 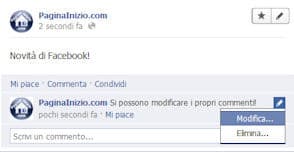 It works like this: click on symbol of the pencil which is to the right of the post and then up Modification, by doing so you can modify the inserted text. After the change, its position remains unchanged. Correction is only possible for posted comments, not for status messages.

The old version of the text does not disappear: clicking on the link Modified you can still see it again.

If you want to delete your comments just click on instead Delete.

How to build a corporate identity? Tips and tricks ❯