Periscope arrives the Twitter app that streams our life

It's the app of the future: it's called Periscope, and it is an application, purchased by Twitter for a hundred million dollars, capable of stream our life, to share it on social networks, e transform users into broadcasters. Developed and designed by the Americans Kayvon Beykpour e Joe Bernstein, Periscope is already downloadable on App Store and soon it will also be available for Android.

The app is already famous among VIPs: Fiorello, J-Ax and many others, who already share their moments in streaming and live with their followers.

Periscope works by integrating the accounts with which we are already in contact on Twitter or by adding new users who may follow the same streams. The main screen is continuously updated with suggestions for live shows from all over the world and retention, to be enabled, it only lasts 24 hours. 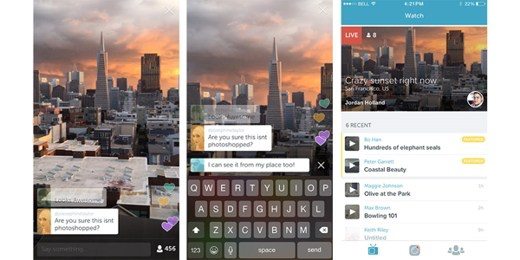 The app will notify us with a notification if any of our contacts are making a direct, even if we are doing something else; in this way it will be enough to access through a swipe on the display and interact with the broadcaster. The comments of the connected users are visible through a chat superimposed on the image, even if whoever broadcasts the live broadcast can easily decide to hide them.

Periscope also allows private streams and accessible to specific users and consultation of the private file of other spectators at the event.

After downloading Periscope, from the App Store, start it and log in with your account Twitter (required in order to use it). Stop on the icon Broadcast (bottom center). The first time you will need to enable the camera, microphone and geolocation.

Type a title for the broadcast and click Home Broadcast to start streaming. To make the broadcasts private, click on the padlock icon and choose which users (among those who follow you) to allow viewing. In transmission, to change cameras, a double tap on the screen is enough.

To end live, drag your finger down and tap Stop Broadcast. With Save To Camera Roll you will be able to save the movie in the iPhone. If you want, within 24 hours, you can review the recordings of your streams by going to the tab Watch and scrolling down: the last ones are accessible under the heading View All Recent Broadcast.

To search and add people to follow, you need to go to the tab People. When someone you follow starts a live stream, you get a notification and can connect to see it. During the live broadcast you can interact with the broadcaster by leaving comments or expressing your appreciation with little hearts.

In conclusion this is not new, also because there are already several apps that can do almost the same thing, such as: Live Stream. Younow e Twicasting. Yet Periscope promises to become the key to broadcasting on the move, and the combination with Twitter will facilitate not only the sharing of the most important moments of one's life but also that of making known another point of view of events without filters or controlled direction.

How to remove duplicate title and description meta tags in BlogEngine.net

Online shopping, food and drinks now arrive directly at home: here are the numbers of an announced success

The best apps to download free music on smartphones