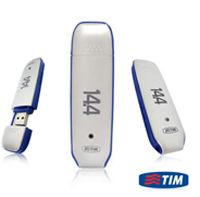 Onda presents, exclusively for TIM, the new internet keys capable of reaching a speed of 14.4 Mbps

On vacation we certainly couldn't miss one of the new Onda internet keys.

Offered with Tim's subscription plans, these internet keys promise connection speeds of up to 14.4 Mbps.

As soon as it arrived at the editorial office, the white on black figure on the packaging, 14.4, was clearly visible, a detail that distinguishes the product.

Sober dongle, bulky enough that is not surprising either for the design or for the materials, but the enthusiasm to check the connection speed means that everything else takes a back seat, at least initially.

We carry out the test with a Tre sim, thus manually setting all the preset connection parameters for the Telecom Mobile access point.

Operation not too difficult, the GUI of the TIM connection client is clear and well done, even if in our personal opinion, a nice "repaint" of that red, blue and gray would not be bad at all.

Obviously, for a level playing field, we wanted to compare the new Onda internet key, with the key in our possession, supplied with our sim and with a maximum speed of 7.2 Mbps.

We connected several times and carried out several tests, even if we do not publish them as at least an approximate figure was deduced from a dozen tests, due to a fairly unstable connection, a feature still very common in such devices. Obviously we have not limited ourselves to areas that are well covered by operators, also pushing ourselves in places where the received signal often remained below 25%.

After several hours of connection in different situations, we can certainly say that the high speed is actually noticeable, but only with good coverage, at least 75%, obviously those who own Sim cards from operators other than Tre are certainly privileged to have greater coverage. .


The connection, under 30% coverage, falls much more often with the new Onda dongle than, rather, with the already run-in Huawei device. Furthermore, on the latter, the speed is much more constant, but this aspect is absolutely not a problem during the connection.

However, the great limitation of these devices, always speaking of non-optimal coverage situations (i.e. in mobility, a situation for which the internet keys were born) remain the large files to be downloaded, in both cases, in fact , any attempt to download files larger than 50MB has failed.

Definitely an excellent product for those who have good reception, thanks to which they will not encounter any problems either in download or upload. In addition to what has already been said, moreover, the Onda key offers the housing for a micro SD, with a maximum size of 8 Gb, a great convenience, therefore, as regards storage.

All that remains is to go to a Tim dealer and evaluate the offers proposed, obviously after a careful comparison with the proposals of the competition.

In the meantime, we are waiting to test the new 28 Mbps keys that some operators are already starting to promote and sell.