How to connect two or more PCs through the mains

Do you want a practical and intelligent solution to connect several PCs using the electrical network? If you don't know there is a way to avoid using additional cables saving time and money, how? Read on and I'll reveal to you in a few simple steps how to connect two or more PCs through the mains.

If you have a phone socket in a different room than the one where you usually keep your PC, you may have difficulty surfing the Internet at high speed. In such situations, the best solution could be to cover all the PC stations through cabling with network cable (not a little expensive solution), or to resort to Wi-Fi, considering the fact that often the reinforced concrete walls could hinder the radio signal. Therefore? In the latter case you can find a solution to the problem by using the powerline adapters that allow connect two or more PCs through the mains to offer an Internet connection from any room with a power outlet. 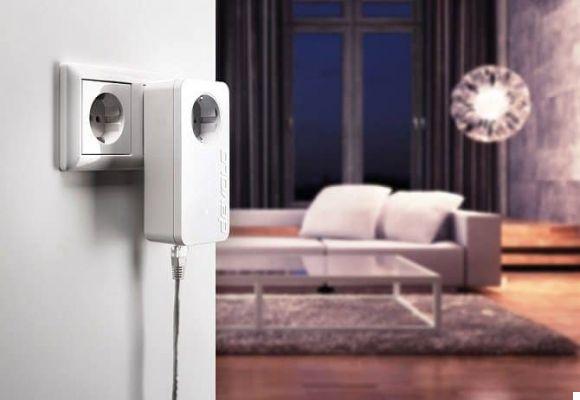 Operation is similar to that of a normal network cable. The difference is that the adapters transform the data transmitted by the PC or router into high frequency signals which then travel on the power cable. These signals can be picked up by any socket in the house thanks to an adapter. The latter converts the signals back into data and transmits them to the computer, router or other networked devices.

To create a network using the electrical network you must equip yourself with at least two adapters. The powerline adapters allow you to: connect two or more PCs through the mains in order to transfer photos, videos and music. Such an exchange can even take place between 255 PCs. A powerline adapter conveys data from the router to the electrical outlet, which can then be received by an adapter connected to any outlet in any room, extend the WLAN network, by connecting an adapter to a WLAN router, so that all PCs in the within range can establish a wireless connection.


The powerline network guarantees a constant transmission speed compared to the WLAN network, although in reality these adapters are much slower than claimed by the manufacturers. The reason is that producers take gross values ​​into consideration: much higher than the values ​​achievable in reality. 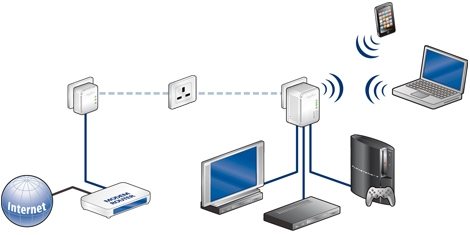 For this reason the Powerline devices have been divided into speed classes. The HomePlug 1.0 for example they are old adapters that transfer data up to three, four megabits per second. The HomePlug 1.01 (Turbo) instead they reach a gross speed of 85 Mbps, even if in practice they hardly exceed the threshold of 30 Mbps.

- Jome Plug AV e DSS2 they are adapters that reach a speed of about 200 Mbps, but in practice 140 Mbps is a more likely value.

Unfortunately it must be considered that the high frequency signals of the adapters can cause various problems such as:

Powerline networks are safe as long as the default passwords are changed. The only drawback of these devices is the disturbances that can occur on the electrical network to affect, in some cases, even directly on the health of people with pacemakers or other sensitive electronic devices. Excluding these extreme cases, the powerline technology integrates seamlessly with existing networks in order to cover the critical points and continue using WLANs or classic cabling via network cable.


How to connect a powerline adapter

connect two or more PCs through the mains you must first connect the computers via a network cable to the adapters, and then plug the adapters into the power socket. The data will be transferred exclusively through the electricity network. To expand the network and connect more PCs you need to use a router that connects via cable directly to a powerline adapter. This way, with other adapters, you can access the Internet from any room. 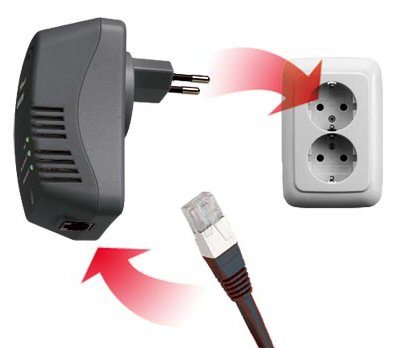 Powerline technology lends itself to be used in conjunction with other technologies. The network cable from the adapter can be connected directly to a PC or a WLAN router which allows all PCs to establish a wireless connection.

Among the best powerline adapters I recommend:

Netgear XAVB101 available at around 70 €

Devolo DLAN 200 AV Plus Starter Kit available at around € 65

How to connect led lights to Alexa ❯

Adsl not working? Here's where the problem lies

How to stop missing out on eBay auctions

What is the Doorway