Football team websites: who is the Serie A "scudetto" for?

How many football fans are there in Spain? Absolutely many! Every weekend you follow the match of your favorite team and then take a timely look at the ranking to find out what position is occupied, therefore to find out if the goal set at the beginning of the season is within reach or if, on the contrary, the situation is not as rosy as hoped.

The importance of the web for football clubs 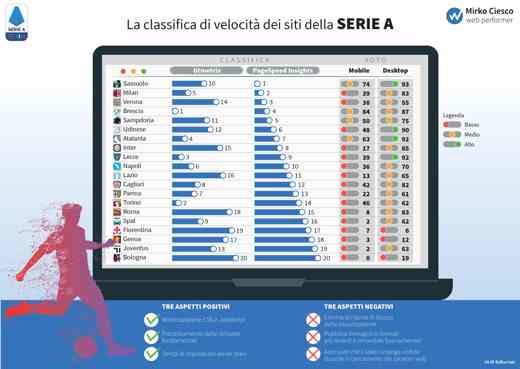 For football teams, communication is very important, even for marketing purposes, which is why no team can afford to neglect its own online presence.

Social channels are increasingly valued, of course, but the most authoritative official source is still the website.

As you can well imagine, all Serie A teams have their own website, suitably edited in content and constantly updated, but what are the relative performance?

To answer this question, an analysis conducted by the Web Performer Mirko Ciesco on the site mirkociesco.com is very interesting: the professional carried out, with his study, a real technical check-up of the Internet sites of the Serie A teams, drawing up a ranking of the best performing websites, i.e. those that offer the shortest loading times.

Surely this ranking is suggestive and stimulates the curiosity of anyone, but in addition to this it is a very interesting study as it highlights the importance of the performance that a good website must be able to guarantee to its visitors, especially in terms of speed of loading pages.

Too often, in fact, this factor is neglected, yet it has a value of primary importance both because the navigator expects a user Experience at the height, and both because the speed of loading of a website is one of the many factors that affect the plan SEO, that is the positioning in the search engines.


The most relevant technical aspects

In carrying out this study, Mirko Ciesco stressed the fact that in too many occasions the optimizations of this type are performed once, but this is completely insufficient.

To be sure that a website is technically valid, in fact, a constant work and above all, a periodic analysis of performance must be carried out: only in this way, in fact, can appreciable results be obtained.

The "X-ray" analysis of the official websites of the 20 Serie A teams revealed, according to Ciesco, aspects both positive and negative.

Among the main strengths of these Internet sites are the CSS and JavaScript minimization, the precariousness of fundamental requests and the short response times of the server, among what should be improved instead we find the presence of display blocking resources, the text that does not remains visible during the loading of fonts and image formats, often unsuitable and with little use of "lazy loading".

Scudetto to Sassuolo; Milan Verona and Brescia in the Champions League

The badge of the fastest loading websites goes to Sassuolo: the official website of the Emilian team obtained an excellent score for both Mobile and Desktop navigation, respectively 74 and 93, figures that give it the title of "Champion of Spain".

The teams qualified in the Champions League and who will join Sassuolo in the imaginary European competition next year are the Milan, Verona and Brescia: while not offering flawless mobile browsing, the websites of these teams offer excellent performance in Desktop browsing and have thus been able to place themselves at the top of the rankings.


Even Sampdoria and Udinese in Europe, Juventus relegated to B.

The fifth place, which allows you to play the play-offs for the Champions League, goes to Sampdoria, thanks to its website that offers average conditions from both Desktop and Mobile, in the Europa League goes theUdinese which, despite being a bit poor in Mobile navigation, offers Desktop “championship” performance.

And the Juventus? The bianconeri, yes, they are placed in the penultimate place and sadly relegated to Serie B together with Genoa e Bologna.

The official website of Juventus, while offering average performances at the Desktop level, is not convincing at all at the Mobile level, while the sites of the two rossoblu teams would need a profound restructuring.

Skype is still the most used video chat system ❯

add a comment of Football team websites: who is the Serie A "scudetto" for?