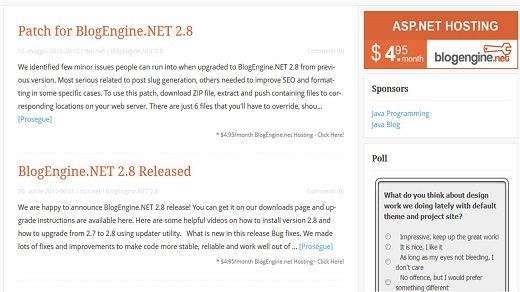 In the new version the following elements have been fixed:

Once you have downloaded the new version of Blogengine.Net and carefully read the instructions for updating your current version, you will also have to download a patch released to solve some BE 2.8 installation problems, to have version 2.8.0.1.

To use it, all you have to do is download the Zip file and extract the files to the corresponding locations on your web server.

Here is a video on how to install BlogEngine.Net 2.8

There is also an easy-to-use updater utility, made available by one of the developers of the BE platform, which will allow you to upgrade to the new version of BE.

BlogEngine.net: how to remove date from post URL ❯