Apple launches the iPad Air and gives away the OSX Maverick

It was presented today at the Yerba Buena Center di San Francisco from the Cupertino company, Apple, the new iPad Air, a more powerful and thinner mobile device than its predecessor, theiPad 4.

The iPad Air always has a screen of 9,7 inches, a noticeably thinner thickness of only 7,55mm and is a lot more light, it goes from 635 grams to 460. The chip is the same 7-bit A64 that Apple is using for the new iPhones and the graphics are eight times faster than the previous one. However, it will not have the Touch Id present on the iPhone 5s. 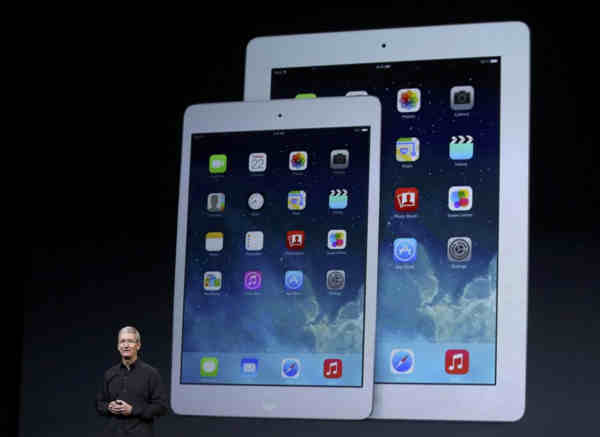 Il Wi-Fi, with the integration of mimo technology, is much improved, added two microphones for audio and one 5 megapixel camera. Lightweight enough to be held with one hand, the iPad Air comes in 4 colors: white, silver, gray and black and will be available in Spain from November 2, 2013 at a starting price of 479€.

These are the technical features:

Leading the event in San Francisco was the CEO Tim Cook which highlighted some numbers of the company: a million apps available, 60 billion downloads, $ 13 billion in developers' pockets. Furthermore, he confirmed that theiPad Mini has undergone some improvements: the chip a 64 bit e il display a Retina. It will arrive in Spain in late November at a price of 389€ (for the 16GB version) while the old model will cost € 289,


The real twist of the presentation, however, was the decision by Apple to give away the new operating system OSX Maverick (available Tuesday) starting with those who still run the 2007 operating system on their Macs. Cook meets his customers not only through the free update of the operating system but also making apps free exclusive for work (including iWork) and for leisure (including iLife) for Mac and iPad.

Computers will have a longer battery life as the operating system is updated.

Details of the new have also been revealed Mac Pro which should be released in December starting at $ 2.999 in the US, while in Spain will come to € 3.049. The new Mac Pro will consume 70% less energy than the current version. Also renewed the line of laptops: the MacBook Pro with 13-inch Retina Display will be lighter and thinner and will mount a chip Haswell e Iris integrated graphics guaranteeing 9 hours of battery and a much higher speed than the previous model. For the 15-inch MacBook Pro the processor will be a Intel Crystalwell i5 2.4GHz and the graphics card one Nvidia GeForce GT 750M.

Dizzying products and numbers that give a hard blow to Microsoft that charges its new operating systems, but not only, Apple looks to the future by focusing on the digital mobile world without ever neglecting, however, the design and hardware of the Mac Book Pro and desktop Mac Pros.