Facebook gives the possibility of block and unblock a friend at any time, through simple configuration options.

There can be many reasons that lead you to block a person on the famous social network, but you must know that it is not a final decision and that, at any time, you can change your mind, retrace your steps and unlock people on Facebook.

Before you understand how to unblock someone on facebook, let's see what happens when this decision is made. 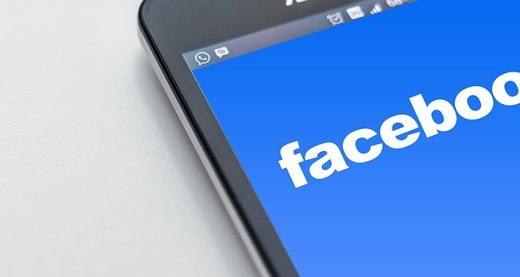 To understand how to unblock someone on facebook it is useful to know what is the procedure to block it, so let's start with this operation.

There are two ways to block someone on Facebook:

Now let's see the various options for unblock on Facebook a friend.

You can unblock a person or friends on Facebook from PC, by entering your profile and then clicking on the menu Account (arrow symbol pointing down), then up Settings and privacy> Settings and on the voice Block Someone.

In this session you will find all the blocked users, to unblock them all you have to do is choose the person and click on the button Unlock to the right of the name. 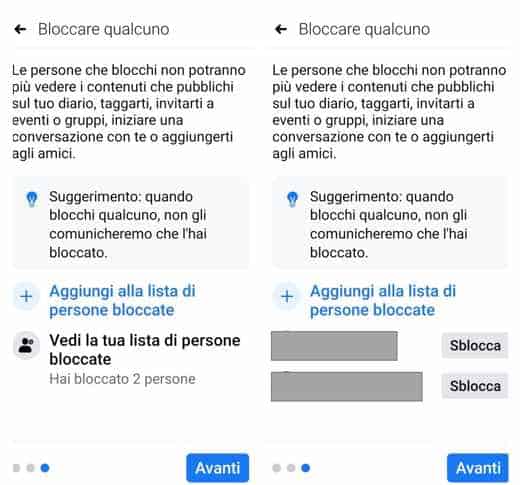 unblock people on Facebook from the application you will have to tap onicon with three dots, next to the button Add a story, to access the Settings of the profile. Here I stop on See quick links to privacy, Then See other privacy settings and finally on Check some important settings.

On the screen Privacy Controlclick your Who can see the content you share and then on the buttons Continue, NEXT e NEXT. Press on See your list of blocked people and on the user you want to unblock, press the button Unlock twice to complete the operation.

Le people blocked on Facebook undergo a series of limitations. First, they cannot view the content that you or your friends post on your profile; they can't post to your wall, start conversations, or re-add you as friends.

When you block a friend, you can't access their content either, you can't send them private messages or request their friendship. In order to do this you will have to unblock Facebook contact. We remind you that by blocking a contact, neither of them will appear in the search results of the social network.

Blocking a contact is different from removal of friendships, in the latter case, the public news remains accessible to both and it is possible to send the friend request again.


Furthermore, when you decide to block a friend on Facebook, they will realize that they have been restricted, in these cases they are very likely to decide to remove you from their friends, so think carefully if your problem with this person is only temporary.

How to block and unblock a person on Facebook Messenger

It is possible too block a person on Facebook Messenger, preventing him from contacting you, but without blocking him as a friend.

If someone bothers you but not to the point of wanting to permanently block, you can try to stop them momentarily on Messenger, in order to limit contacts.

In fact, after the block on Messenger, the person will no longer be able to contact you privately, you will decide when to unblock him and allow him to have the possibility to start a conversation with you again.

To block a person on Facebook Messenger just open the conversion from the official application and click on the icon at the top right containing the letter "I" information and choose "Block" and then Block on Messenger. 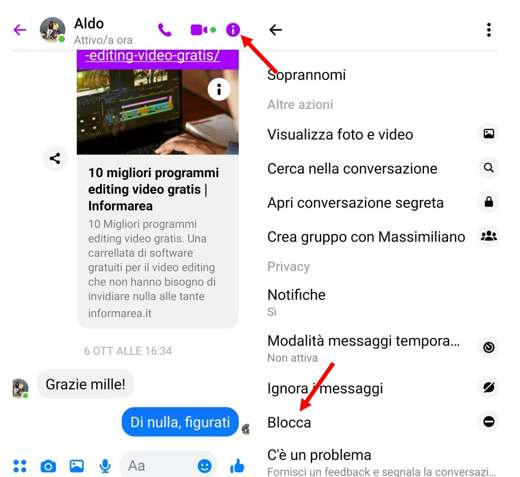 From PC, instead you will have to open the conversation with the person you want to block, click on the down arrow placed next to his name and then choose Block> Block on Messenger. 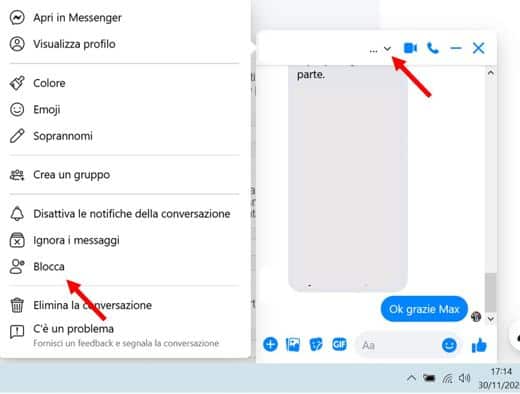 After doing this, the blocked friend will no longer be able to send you messages. What to do if you have changed your mind? 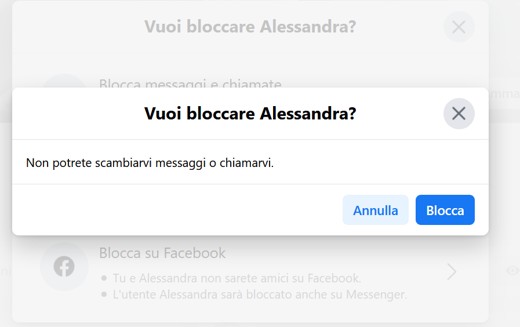 You can unblock a friend on Facebook Messenger following the same procedure used to block.

To do it from the mobile application, open the Messenger conversation list, find that of the blocked person and open it, you will notice the word "Unlock", by clicking on it you can then continue the procedure by choosing "Unblock on Messenger" and then confirm further by selecting the item again Unlock.

To unlock the person on Messenger on the PC you will have to go to the conversation and always click on the down arrow, here too you will notice the voice Unlock, continue on Unblock messages and calls and confirm the procedure by clicking once again on Unlock.

From this moment the person will be able to return to send you messages and to make calls and video calls.