Why WAMP doesn't work in localhost on Windows

If you want to set up a full server environment on your local computer to test your Joomla CMS or WordPress PHP based sites, just to name a couple of popular platforms, we recommend using Wamp o Shampoo (if the operating system is Windows) or Mamp (if the operating system is iOS), rather than installing Apache, PHP, MySQL, phpMyAdmin and other useful tools separately.

The installation of Apache services such as Wamp (Apache, MySql and PHP) or Xampp (Apache, MySql, PHP and Perl) on Windows often creates gods display problems in localhost returning blank pages or with error code 404.

Apache is automatically configured on HTTP port 80. If our operating system is Windows, you may find a conflict with existing programs such as Skype o IIS (Internet Information Server), who are competing for port 80 on localhost.

However, there is the possibility through the Apache services to identify, in case of malfunction, which application occupies port 80. In WampServer for example you can go to Apache> Services> Test Port 80. 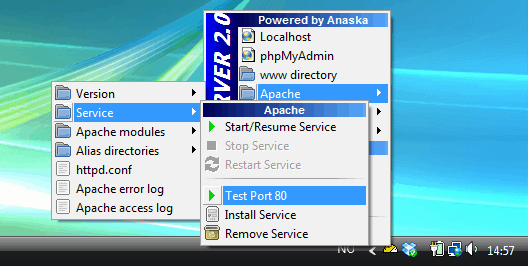 In the screen that will appear you can identify which application occupies port 80 and decide to temporarily block the application:

To permanently use all services it is advisable set a different port in WampServer, which can be either the port 8080 or port 81.

To do this, it is necessary to act on two files httpd.conf e wampmanager.tpl.

First close WampServer by right clicking on the icon in the system tray and selecting Logout, then go to wamp bin apache Apache conf and open the file httpd.conf and try to locate the voice by finding it strip e localhost (e.g. Listen 80 and ServerName localhost: 80), to replace, where it is present, port 80 with port 8081 or 81. Save and close.

Do the same with the file wampmanager.tpl present in wamp , open it and look for the three items:

Start Wamp and if everything works it means that you have correctly followed the instructions above.