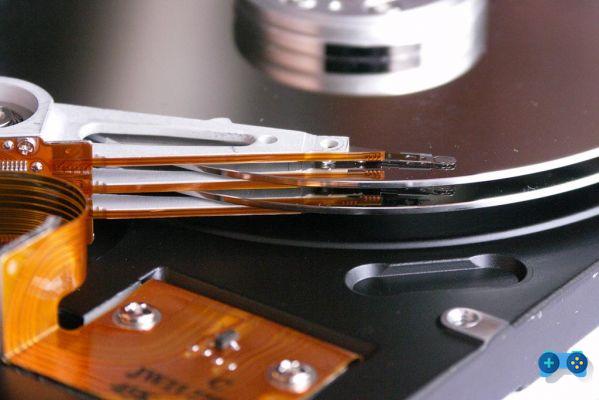 If you have a minimum of experience with the PC world, probably more than once you have found yourself having to deal with the need to find a good program, free, to fix a disk partition that is no longer working, create different ones, resize them, copy the data or simply remove it and in fact the first function that comes to mind for a program like this is to create several partitions one for the system files and the other for the data files, an operation that together with the backup systematic data is to be considered essential for all aware users.

The web is full of programs that promise stars, but very few are able to offer a reliable and complete product even in their free version.

EaseUS Partition Master (Free) is one such program. As we have said, it is a program developed by the EaseUS specialist - of which we have already had the opportunity to try Data Recovery Wizard - which is able to perform a series of activities related to the data stored in your partition but also other operations that are normally entrusted to other specialized programs, such as cleaning or defragmentation.


EaseUS Partition Master (FREE) supports disks up to 8TB (in the paid version up to 16) and is also equipped with all the most useful features to operate on disks or partitions: EASEUS Partition Master Free is in fact able to create, delete , resize, move, expand, merge, copy or clone any partition be it on HDD, SSD, USB stick or flash memory, in a way so simple that even the most complicated of operations will seem child's play.

The image below summarizes in a rather explanatory way the set of features included with the free version of the program, which range as we said from the simple resizing of a partition to the conversion of an old partition into NTFS, as well as the merger of two partitions into a bigger one. 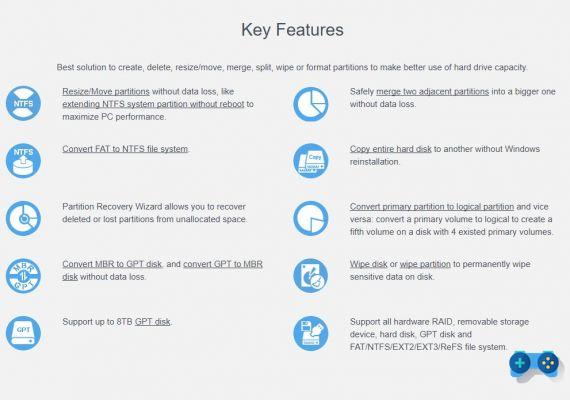 As we said, however, Partition Master Free also integrates additional features usually the prerogative of other software, such as 4K alignment, which allows you to further speed up and optimize the operation of SSD disks. Solid state disks, in fact, with the passage of time, due to the proliferation of junk files or even for the simple fact that the space on them is running out, tend to reduce their performance. The 4k alignment feature of EaseUS Partition Master Free allows SSD disks to adopt the smallest 4k sector in the file system to save data, thus speeding up their operation.

Furthermore, with the latest version of Partition Master FREE, a new, even simpler and more pleasant graphic interface has been introduced, which gives the product not only great versatility, but also extreme ease of use, as you can see in the images of the gallery below. 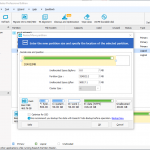 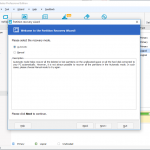 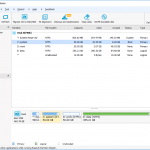 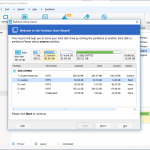 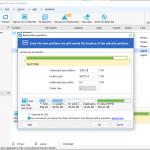 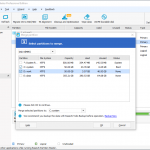 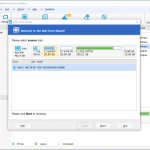 Advantages of the PRO version: converting an MBR partition to GPT

In short, the free version has everything that a basic program should have, with very few negative points (if not perhaps the need to avoid installing other sponsored programs during the setup phase). However, the Free version, at a decidedly reduced cost, only $ 47, can be transformed into the PRO version which guarantees you access to a series of very interesting advanced features, such as the one that allows you to transform an MBR partition into GPT and the other way around. If you have not lived on the moon you will have happened to find yourself, at least once, in front of these two terms which stand for GUID Partition Table (GPT) and Master Boot Record (MBR). GPT is a more modern standard that is gradually replacing MBR, thanks to the presence of some advantages, however compensated by the greater compatibility and diffusion of MBR (not surprisingly it was introduced with MS-DOS back in 1983).

The reasons why you might need to convert a partition MBR in GPT, and therefore there are many to use Partition Master, among many for example the need to switch to a 64-bit version of Windows 10 (in the X64 version the Microsoft operating system only supports GPT), or the impossibility for MBR to manage disks larger than 2TB or more than 4 partitions.
GPT, in addition to overcoming these limitations by providing a practically unlimited number of partitions per disk and support for disks of any size (in general the limits are related only to the operating system used) is also a generally safer system. With GPT, in fact, partitions and boot data are duplicated in different sectors of the disk, so that, in the event of a catastrophic event, there are much more chances of recovering your data than with an MBR-based system which, on the other hand, keeps only one copy. of this data in a single sector. GPT also carries out continuous checks to verify data integrity (CRC) and if the data is corrupted, it can warn you of the problem and try to restore the damaged data by recovering it from copies on other parts of the disk.

EaseUS Partition Master allows you to perform this migration to Gpt in a very simple way, with a few clicks, and, above all, without the need to format the disk.

Another feature absent in the Free version and available in the PRO version is that of migration of the operating system to another disk.
The arrival of SSDs at competitive prices has represented in recent years a real turning point as regards the responsiveness of the machines and those who have not yet equipped an SSD on their machine would do well to run for cover; however, until a few years ago the cost per megabyte of these units was still too high, which forced to combine a small ssd disk with a traditional mechanical disk. Today, thanks to the drop in the prices of NAND memories, it is however possible to buy a 500gb SSD disk even for a few hundred euros. Thanks to the Partition Master migration feature, you can move your operating system and all programs from one disk to another without losing anything. As you can imagine, this feature can also be useful when faced with a system disk failure. 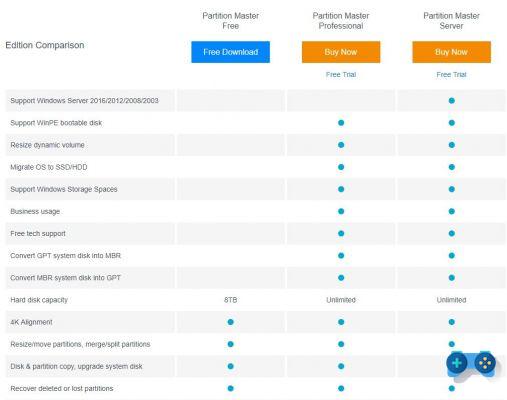 EaseUS Partition Master Freeultimately, it has everything you need for your disk and partition operations. The improved graphic interface and the presence of all the emergency functions necessary for the management of their partitions and disks, make it an extremely effective and inevitable tool in the software package that every geek should carry with them. The Professional version also adds support for larger disks and some really interesting features, such as the possibility of converting MBR partitions to GPT and the migration of the operating system that are definitely worth the purchase cost, especially if, like myself , you often find yourself having to change machines and disks.