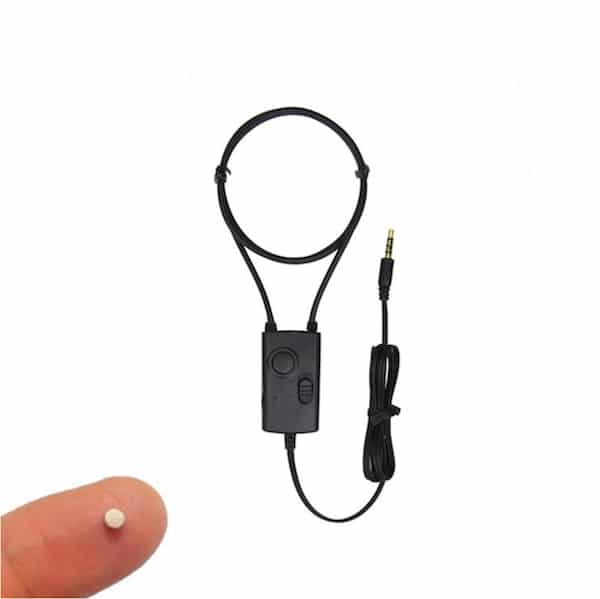 The famous spy micro-earphones, as their name suggests, they are small earphones used by students, prominent personalities of the show and professionals during exams, rehearsals, theatrical performances, conferences, rallies and other various occasions.

These are special devices, equipped with a cutting-edge technology, which allow two or more people to communicate, perhaps to receive suggestions on a speech to recite, notions to be included in a test or to exchange information, even without the knowledge of those around them.

This is because the tiny appliance turns out well hidden inside the ear and the volume of communications is set so that only the wearer can hear. There are different types that differ for example in the technology used or in the fact that they are more or less visible from the outside.

The best known are i induction micro-earphones and Bluetooth ones. In essence, the two models are similar, if not identical, since to work they both need an element that allows communication, such as an mp3 player or a smartphone, of an inductor, which can be any object, such as a pair of glasses, a necklace or a common pen, and obviously some earphone.

The big difference between models of inductive micro-earphones and Bluetooth lies in the fact that the former have, in their construction, cables that connect the transmitter to the inductor element, while Bluetooth devices, precisely because they use this technology, do not show the slightest presence of connection cables.


It is therefore intuitive that the former, in order to be hidden and made invisible to any "extraneous controllers", must necessarily be cleverly concealed under clothing.

As for the visibility of the actual headset, there are some that, inserted inside the ear, disappear completely, while others can be noticed. In the latter case, however, it can be remedied with a cap or, for those with long hair, by moving the hair forward.


But how exactly does an inductive technology micro-earpiece work?

As previously mentioned the inductor element, in these particular models, is connected via a cable to the smartphone or to mp3, through which the information arrives. From the inductive element these communications will pass directly to the very small earpiece placed inside the acoustic meatus of the "receiving" individual.


The positioning operations of the various constituent elements is of fundamental importance to ensure that everything works at its best.

For example, clothing should not be too tight, because it would immediately detect the presence of something suspicious. Without a doubt it is not difficult to install the kit in the best way, even if it is the induction micro-earphone model.

These small devices are simple to use, above all suspicion and above all useful on many occasions. Just think of an upcoming exam for which you have not had time to study, a presentation of an important work, a theatrical performance prepared by the actors in a short time or a rally by a prominent figure in politics.

Do you want to complete all the achievements and trophies and know all the tricks, guides and secrets for your video games? SoulTricks.com is a group of video game fans who want to share the best tricks, secrets, guides and tips. We offer the best content to be a source of useful information, so here you can find guides, tricks, secrets and tips so you can enjoy your games to the fullest. Are you ready to get all the achievements of that game that you resist so much? Enter and enjoy your favorite video game to the fullest!
DOOM Eternal The Ancient Gods Part 2 shows up in the launch trailer ❯

Add a comment from Invisible Micro Earphones: what they are and how they work