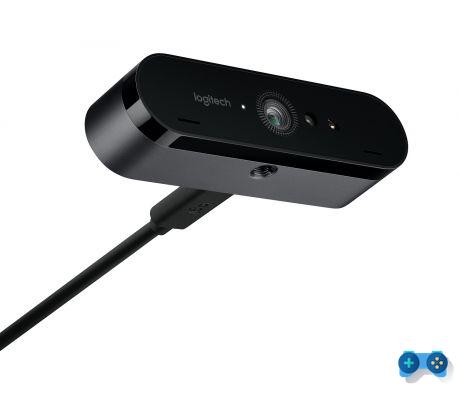 Aimed at gamers and streamers, the new BRIO 4K STREAM Edition expands the Logitech specialist's webcam family by allowing users to choose between two different modes, 4k and 30fps, or 1080p and 60fps for much smoother and more dynamic images. The camera is also equipped with HDR that allows you to capture variations in contrast and brightness with greater precision.

For all the information on this product and to know the price, we refer you to the press release below.

“Broadcasting has become a social phenomenon. Gamers spend twice as much time watching challenge videos among other players and live streams on Twitch ™, Youtube® and Mixer are becoming the next generation TV, ”said Guillaume Bourelly, Senior Portfolio and Product Manager of Webcams at Logitech. “With BRIO 4K STREAM EDITION, we have optimized our BRIO webcam. We have created a device that integrates everything a video enthusiast seeks to engage his audience more and more. In addition to capturing all the details in 4K, the frame rate priority mode allows you to transmit at 1080p / 60fps with a constant ratio and a fully integrated solution with XSplit Broadcaster ”.

With Ultra HD 4K and high dynamic range (HDR), BRIO 4K STREAM EDITION ensures four times the resolution of full HD video and automatically adjusts the brightness, so that the person does not appear in shadow when positioned at the back or when it moves from the outside to the inside. Ultra HD 4K then captures even the smallest details of the face in vivid colors and maintains full HD quality when zooming in and out, so that subscribers of a YouTube channel can watch the video clearly regardless of the background light.

Logitech BRIO 4K STREAM EDITION produces sharp video with hyper-fast frame rate at 1080p / 60fps when using the frame rate priority mode. This mode reduces lag and delays when recording or making slow-motion or replay videos. The webcam also includes ChromaCam, a Personify AI neutralizer application that can blur, remove or replace noise when you want to create a professional image, wherever you broadcast. Furthermore, it is possible to customize the viewing angle by reducing it to 65 ° or 78 °, so that the focus is on the person, the protagonist of the video, or to enlarge the frame beyond 90 ° so that subscribers to a channel can view the whole scene.

Logitech BRIO 4K STREAM EDITION is available on Logitech.com for a suggested retail price of € 249 including VAT.

Sony XB13, a portable wireless speaker with EXTRA BASS to take to the beach