How to delete a space before text in Excel

You have loaded a csv list in Excel and you find yourself in the situation of having to delete a space before the text in one of the fields imported? Have you already tried with other functions like undo.spazio but it didn't bring you desired results? Well, make yourself comfortable and take five minutes of your free time, because in a few simple steps I will reveal to you which function to use to eliminate a space at the beginning of the text in an Excel field.

If you have a lot of data and you don't want to waste your time manually deleting the single space placed before the text, I suggest you use the following command after selecting all the column in which you want to remove the space.

Below is the formula to eliminate the space before the text. After selecting the whole column apply the following formula:

The formula is used to replace a space in cell A1 with an empty space; putting 1 as the final element, you will only replace the first character of the text that corresponds to an empty space. 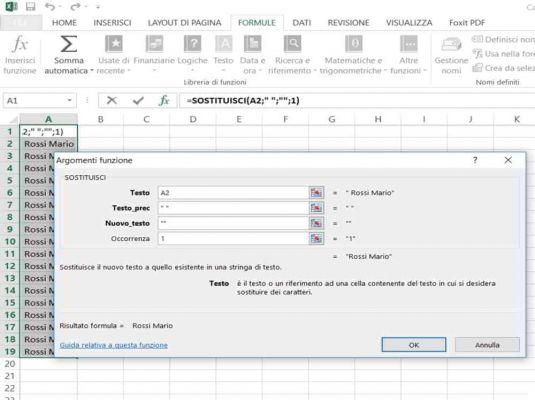 If, on the other hand, you intend to eliminate all the spaces in the string, all you have to do is apply the following formula., Of course after selecting the entire column.

Another solution is the formula CANCEL SPACES, which allows not only to eliminate the space present before the text but also the final one. Eg = CANCEL SPACES ("First quarter earnings")

How to shrink the log file on all databases ❯