How Aptoide works and what are the best repositories

Here is a guide on how Aptoide works, one of the best Play Store alternative stores to download third-party Android apps, and which are the best repositories for Aptoide.

In many cases these are apps that Google has not allowed to publish on the Play Store, in other cases, instead, they are modded versions of games that offer unlocked levels, infinite lives and much more.

Aptoide is a store where you can find free apps that would otherwise be paid. Aptoide is an additional market for Android devices (not to be confused with apdoide, apptoid, aptpide, ap toide), which installs through the mobile browser and allows you to add the best repositories around to find servers full of apps and games of all kinds.


Is Aptoide safe and legal?

Unlike the Play Store, on Aptoide anyone can distribute their apps and create their own Repository. On this store, you will find everything from legit apps to user-modified ones.

To be sure of what you are downloading you need to check some elements that inform about the reliability of the app and which are:

The ideal is to have an antivirus, in this regard I suggest you take a look at the best Android Antivirus. Alternatively, you can always check if the app you are downloading is trusted and free from viruses, read this guide on: How to check if the APK is a virus.


Legal side, the store does not have control of the material deposited in the various repositories. For this reason it cannot be considered an illegal store, although users should avoid downloading illegal and modified apps.

How to install Aptoide for free Android 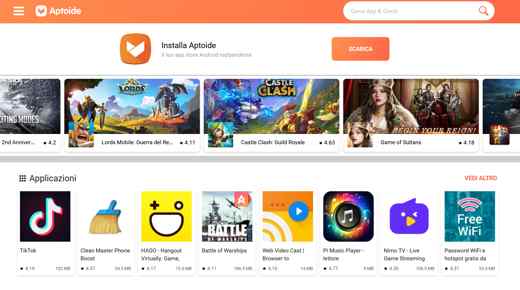 Since Aptoide cannot be installed from the Google Play Store, the option must be enabled on an Android smartphone Unknown origins, present in Settings> Security. This option allows the installation of any apk app, even those not present in the official Google store.

It might interest you: How to activate Unknown Sources Android

To install Aptoide apk download, launch the browser of your Android mobile device and go to the official website. Stop on the orange button Download to download Aptoide on your PC or smartphone or download the QR code to install it directly on your mobile device. At the end of the download, step on the file .apk Aptoide Android to start the installation. Continue with NEXT and complete with Install. Your store is now ready.


How to add new repositories 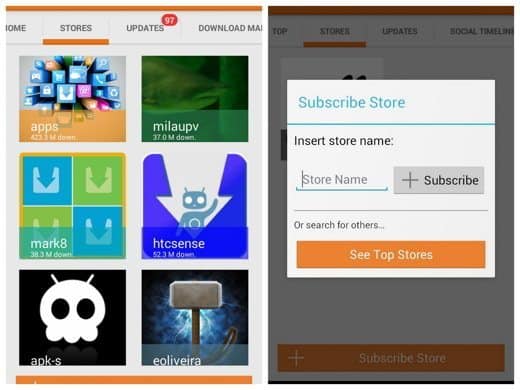 To have more choice of apps and games for free, you can add some to Aptoide Repository. To do this, you need to go to the tab Store, plug up Add Store and Store Name, type the URL of a new repository by tapping on Add to confirm. This way you can add other application stores.


Besides Aptoide download APK there are many other stores that are worth mentioning:

If you are wondering if Aptoide also works on iPhone and iPad, the answer is unfortunately no. However, there are valid alternatives let's see what they are.


In iOS since many functions are blocked there is the Jailbreak that allows geeks to install an alternative store to the App Store, called Cydia, from which you can download many tools and tweaks to unlock the potential of the device. It is also possible to install commercial apps such as AppCake, TeawkBox e TuTuApp. Another valid alternative is to take advantage of online services such as regmyudid, iosreg.com that with a few euros register the UDID of their device in order to make it recognized as that of a developer. In this way you can install cracked apps by downloading them from stores such as iPA – STORE.

How Clean Master works, the app that frees up space for your smartphone ❯