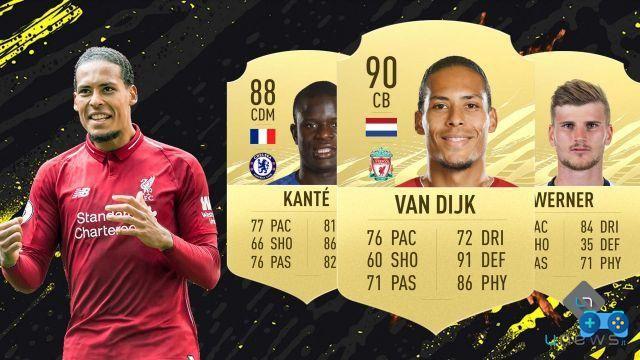 We talked about buggy players, the cheapest ones to buy but we know that nothing can compete with the pride of having a team made up of top players. Those who will accompany you in a thousand battles, and could make you get great results especially in the Division Rivals and in the FUT Champions.

So let's find out which Premier League players will be able to transform your team into the most competitive Dream Team in FUT Ultimate Team.

Alisson (OVR 90) - 90.000/88.500. The Liverpool goalkeeper is the best choice. An incredible player who will easily manage to defend your goalposts.

De Gea (OVR 86) - 17.250/19.750. The alternative is called David De Gea. One of the goalkeepers who has always stood out for his performance. This year it will not be at past levels but at such a price, for us, it is the best possible alternative.

Alex Telles (OVR 84) - 9.500/9.800. Moved to the court of the Red Devils this year. He has very similar stats to Robertson, the only slightly lower is the defense. But the price is much cheaper. Think about it.

Virgil Van Dijk (OVR 90) - 467.000/445.000. Price to say the least crazy but there is everything. An impenetrable defender, we do not believe there is more to add. We wish him a speedy recovery after the serious injury he sustained in the last championship game.

Aymeric Laporte (OVR 87) - 20.000/28.500. He has from his defense and physique, less handsome in terms of speed. For us it remains an essential element for any defense of the BPL and in particular to create the strongest team in the Premier League.

Gomez (OVR 83) - 99.500/87.000. The Liverpool defender has an OV of only 83 but has top player performance. We recommend it as an alternative exclusively for the price, much higher than Laporte. From a performance point of view, however, he is more balanced, above all he has a good 82 speed which also allows him to go on the break when the right opportunity presents itself.

Trent alexander-arnold (OVR 87) - 43.250/52.500. The Premier League has an abundance of right backs. Good Trent is the perfect option. between speed, dribbling and his very high pass, he is very capable both defensively and in attack. To be taken at all costs.

Kyle Walker (OVR 85) - 134.000/106.000. It costs almost three times the previous one because it is a beast. Yes, it's really bestial. Too bad for that dribbling 77; otherwise it has incredible characteristics.

Kevin de bruyne (OVR 91) - 297.000/278.000. We move on to the main course, not that the other BPL departments are nothing short of sublime. But here we are in front of the purest and most crystalline class. The perfect midfielder, capable of both building and finalizing the game. High price but not impossible to achieve.

Fabinho (OVR 87) - 31.750/41.000. Speed ​​has never been his forte but he can have his say in both defensive and proactive phases. With some understanding style that increases its speed, Fabinho can become lethal to say the least.

Thiago Alcantara (OVR 85) - 27.500/35.250. An advantageous price despite being a top. The magician of the midfield, too bad for the body and the speed so low. In the right hands it can really make a difference, even in a game like FIFA 21 that prefers speed and physique.

If you use the COC:

Kai Havertz (OVR 85) - 90.500 / 91.000. Substance and quality for Kai. Theoretically it could also be adapted as a CC but its role is behind the strikers and that's where it can make a difference

Heung Min Son (OVR 87) - 208.000/179.000. With the credits that can be spent only for the Mané you could take home the Sterling / Son combo. The latter in front of goal is incredible and for some he could even be a normal attacker. He can also play both as a starter and be used as a super sub.

Mohamed Salah (OVR 90) - 361.000/325.000. The other 90 piece from Liverpool could not help but be part of this team. Increasingly devastating statistics make it a real thorn in the side of the opposing rearguards.

Gareth Bale (OVR 83) - 51.500/54.500. His Overall has plummeted but still has great stats. Still incredible speed and devastating shot make it a real wild card. Together with Lucas they can be valid alternatives for players who are not willing to spend a lot of money on Salah and Mané.

Roberto Firmino (OVR 87) - 99.500 / 93.000. Good Bobby is the best striker for anyone looking for that player who can pick up the team and defend the ball. He certainly does not focus on speed but has a very high dribbling and an excellent finalization.

The Jolly: Aubameyang (OV 87) - 279.000/258.000. Insane price but superlative performance. We consider him the wild card of this team, not being unlike Werner, we preferred to put him in fourth place. If you like fast players with an incredible shot, the good Pierre is the one for you. If you have a lot of credits, you could alternate it with Werner; we are sure that any defense will have a really bad time. 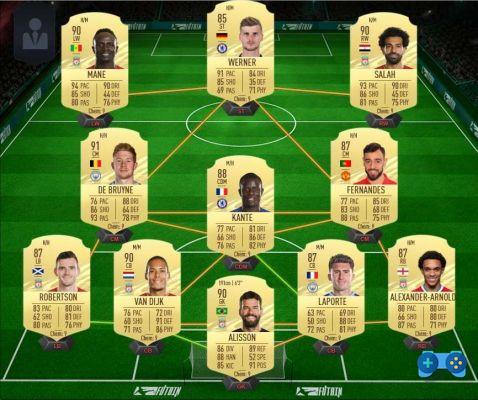 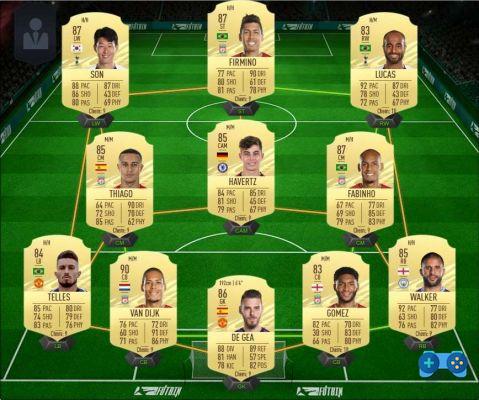 Module 4-4-2 - For those on a really big budget, we recommend this monstrous team: 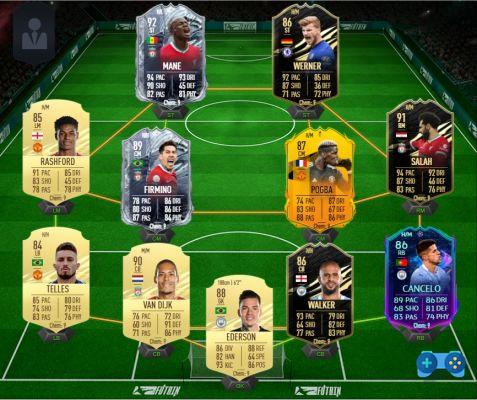 Do you want to complete all the achievements and trophies and know all the tricks, guides and secrets for your video games? SoulTricks.com is a group of video game fans who want to share the best tricks, secrets, guides and tips. We offer the best content to be a source of useful information, so here you can find guides, tricks, secrets and tips so you can enjoy your games to the fullest. Are you ready to get all the achievements of that game that you resist so much? Enter and enjoy your favorite video game to the fullest!
The Elder Scrolls Online Review: Markarth ❯

FIFA 21, the best base-average Icon under one million - Defenders

Crash Bandicoot 4: It's About Time - How to get the Green Gem

Metal Gear Solid: The Phantom Pain, how to get infinite fuel and metals

Add a comment from FIFA 21 - FUT Ultimate Team, the strongest team in the Premier League