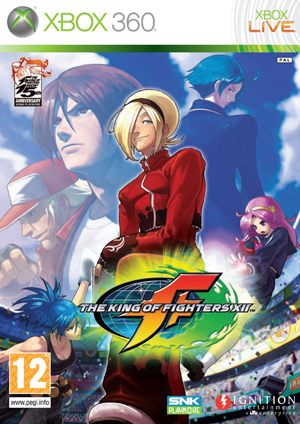 A detailed press release finally informs us of the European release date for The King of Fighters XII.
Fans of the fighting game saga will be able to return to give it a blast on Ps3 and Xbox 360 starting September 25, 2009, at the same time as the fifteenth anniversary of the original series. Here are all the details:

Varese - 7 September 2009 - Ignition Entertainment Ltd., a subsidiary of UTV Enterprise and a global video game developer & publisher, today announces that the highly anticipated The King of Fighters XII video game will be released on September 25, 2009 for Xbox 360 ™ and PLAYSTATION®3.

Released at the same time as the 15th anniversary of the original series, KOF XII offers 22 characters with unique moves and fighting styles within a fantastic 2D setting completely redesigned: fighters reproduced and animated in high resolution fight in multi-detailed fully realized environments. by hand.

The most beloved protagonists of the saga, such as Terry Bogard, Robert Garcia, Ash Crimson, Kyo Kusanagi and Iori Yagami make their return to the scene accompanied by two new characters for the home consoles - Elisabeth and Mature.


The presence of online mode for both formats allows players from all over the world to compete in the ring to determine the true 'KING' among the wrestlers! In fact, online rankings and the Voice chat system will also be available to players.

THE KING OF FIGHTERS XII has already emerged as a winner from the fierce arena of the last E3 in Los Angeles, thanks to numerous awards and nominations, including the prestigious IGN editors award  Best of E3 2009 - Best Fighting Game on PlayStation®3.

IGN: 'THE KING OF FIGHTERS XII it's not only one of the coolest fighting games ever, it's also one of the funniest. Inserting hand-drawn backdrops and characters into a product of the current generation is a difficult task, but KOF XII is totally handmade and it is fantastic. The gameplay is also attractive, and represents a clever update of the classic King of Fighters fighting style. The characteristics of the product will surely win over even those who are not passionate about the series. '

'We are very proud that IGN, the most important portal in the world of gaming, has nominated THE KING OF FIGHTERS XII as the best fighting game on PlayStation®3 '- says Peter Rollinson, Product Manager of Ignition Entertainment -' There is a great and positive expectation in the gaming environment. KOF XII has been improved over its predecessors in many aspects, managing to offer a new but still familiar gaming experience to all fighting fans'

For more information about THE KING OF FIGHTERS XII such as screenshots, trailers and lots of details on the new game modes go to http://www.kingoffighters12.co.uk/

THE KING OF FIGHTERS XII is scheduled for release for Xbox 360® and PLAYSTATION®3 on September 25, 2009

Super Mario Sunshine, how to get sunglasses ❯

add a comment of New date for King of Fighters XII