The second DLC for Transformers is available today: the Battle for Cybertron 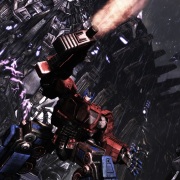 It's time for expansion for Activision's futuristic action. Thanks to the second downloadable add-on content (DLC) for Transformers: the Battle for Cybertron two new characters and five maps are available.

To get this package you need 800 MS Points and 9,99 euros respectively from the Xbox Live Marketplace for the Xbox 360 version and from the Playstation Network Store for the Playstation 3 version, available from tomorrow 8 September 2010 within the usual appointment of the 'weekly update.

For the occasion we show you a gallery of images and the announcement trailer:

NOW AVAILABLE THE NEW DOWNLOADABLE CONTENT OF TRANSFORMERS ™: THE BATTLE FOR CYBERTRON

Legnano, Milan - September 7, 2010 - The battle for CYBERTRON continues with the announcement by Activision Publishing, Inc. (Nasdaq: ATVI) of the new Map and Character Pack 2 di Transformers ™: The Battle for Cybertron, now available for download on Xbox 360® and tomorrow on PlayStation®3. Inspired by Hasbro's legendary TRANSFORMERS brand, the downloadable content will include 2 new playable Transformers characters and 5 brand new maps dedicated to online multiplayer modes.


The two new playable characters joining the group include ZETA PRIME and DEAD END. Players will have access to both characters within the adrenaline-pumping 4-player “Escalation” co-op mode, and will be able to select their appearance to create their own TRANSFORMERS character in traditional multiplayer modes.


In addition, 5 new multiplayer maps will expand the different battlefields where players can wage war with their friends.

Il Map and Characters Pack 2 di Transformers: The Battle for Cybertron is available from today on the Xbox LIVE® Marketplace for Xbox 360® at the cost of 800 Microsoft Points and from tomorrow on the PlayStation®Store for PlayStation 3 at the cost of Euro 9.99.

Do you want to complete all the achievements and trophies and know all the tricks, guides and secrets for your video games? SoulTricks.com is a group of video game fans who want to share the best tricks, secrets, guides and tips. We offer the best content to be a source of useful information, so here you can find guides, tricks, secrets and tips so you can enjoy your games to the fullest. Are you ready to get all the achievements of that game that you resist so much? Enter and enjoy your favorite video game to the fullest!
Days Gone, the bike and its commandments ❯

Anthem Next officially canceled by Bioware and Electronic Arts

Ubisoft, new trailer for Assassin's Creed Origins - the Curse of the Pharaohs

Add a comment from The second DLC for Transformers is available today: the Battle for Cybertron