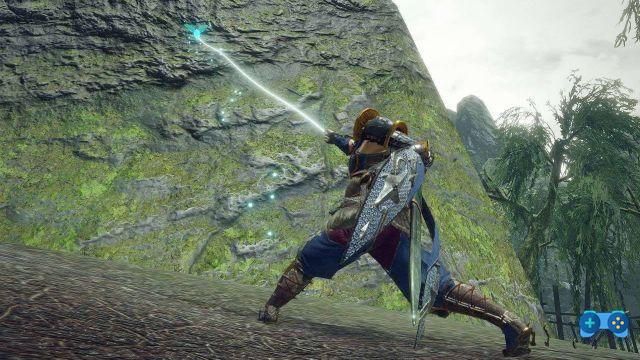 A key part of Monster hunter rise - and of all Monster Hunter games, actually - is about turning the monsters you hunt into fabulous weapons and armor. The idea is that you hunt down a monster and from the materials it drops, build something powerful that will allow you to take on the next monster. Continuing the cycle cycle again and again.

Forging and upgrading are pretty straightforward in Monster Hunter Rise. In this guide, we will explain how to forge new weapons and armor, upgrade existing items, and further customize equipment to become the ultimate hunter.

Forging a new weapon is simple. After you have collected some parts of giant monsters - or parts of smaller monsters in the environment, bones or minerals - bring them to the steel mills in the village of Kamura. Talk to the forge and select Forge / Upgrade Weapon. Now you will need to choose the type of weapon you wish to upgrade or forge. Confirm your choice and the forge will show you a large weapon tree. 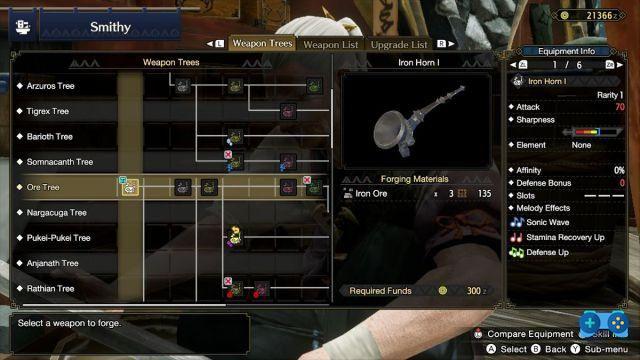 There is a lot of information on this page, but you don't have to be afraid of it. Most of the time, you will have to start on the left (the weakest weapon so to speak) and move to the right (for the most powerful weapon). You can create new weapons only if it is a branch of the current weapon, connected by the lines between the icons, or if it has a T-shaped icon next to it. You can forge weapons with the T symbol even if you have not created the previous ones. These weapons usually start a new branch in the middle of the tree, so your weapon might start with Rarity 3 (a better weapon) rather than Rarity 1.

In Monster Hunter Rise, upgrading and forging are all on the same menu. As mentioned above, you can only forge certain weapons. To get better versions of the one you own, you will need to update them. Instead of looking for the T-shaped icon like when you are forging, go to the box-shaped icon for updates. The box indicates that you already own that specific weapon. 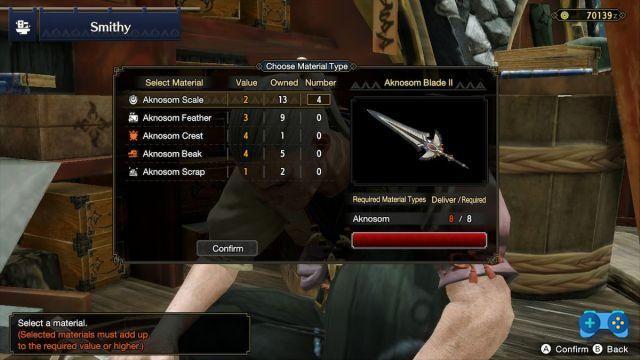 From a weapon you already have, you can advance in the tree with new upgrades. Sometimes this means that you have to jump from branch to branch. You can for example start with a mineral based weapon and then upgrade by jumping branches to a Rathalos weapon.


You will not be able to upgrade from a weapon in a different tree. For example, you couldn't take the same mineral-based weapon and upgrade it to a Rajang weapon. Rajang is an endgame monster with his own forging and upgrading tree. 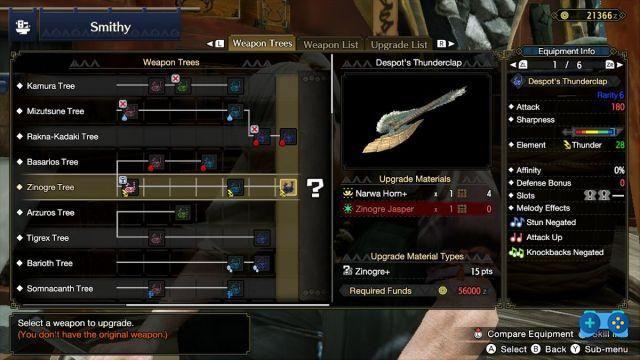 To upgrade, you'll need some parts of the monster your weapon is based on, though less than you need to forge a new one. But some upgrades require you to sacrifice monster parts to reach a point threshold. Select this update and Monster Hunter Rise will show you a list of parts that you have available. Each part has a point value and you will need to supply parts of your choice to the Forge until you reach around 10 points. You tend to sacrifice the item you own more or distribute the parts you intend to use so that you don't completely run out of one item while having a stack of another.

This “choose the parts” upgrade system seems to be useful only for significant upgrades and you will usually only need a handful of specific parts for the next level of weapons. You will know that you will have to sacrifice parts if, under the parts counter in the upgrade screen, it says: “Update material types” and then lists a monster and a point value.

Finally, it will be possible to restore most of the weapons. If you go back up the weapon tree, you can return any weapon that has the yellow arrow icon on it to its initial state. You will receive the sacrificed materials back. This is useful for switching to a different branch of the same tree without having to start over.

Forging armor works like forging weapons. Select the option to forge armor from the forge and you'll get a long list. The armor sets are in order, organized by monster and their rarity value - the further down the list you scroll, the better the armor will be. 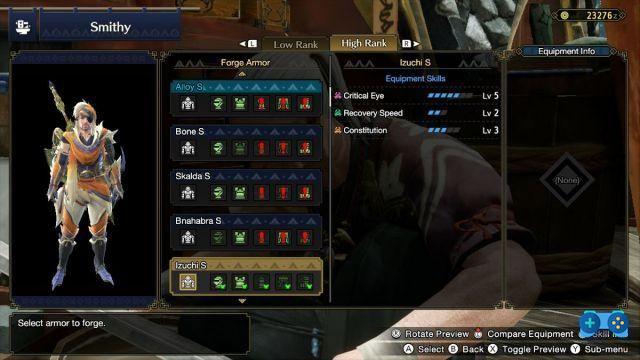 You will need "monstrous parts" to build these pieces of armor, just like with weapons. Unlike weapons, each piece of armor comes with a number of perks. For most perks, multiple pieces of armor that have the same perk increase their effectiveness. In the early parts of Monster Hunter Rise, defense value is much more important than perks, so focus on that. But as you progress, consider the type of player you are and look at the perks that can be obtained before making your own armor.

Upgrading the armor is simple. You will need Armor Orbs, which you can earn by completing missions and special requests - pre-mission rewards such as collecting 10 bones or killing two large monsters. As with the Part Upgrade System, you'll need to feed armor pieces with different armor balls, each with their own point values, to reach a threshold and level up. The higher the level of your armor, the better the protection you will get.

Customization of the equipment 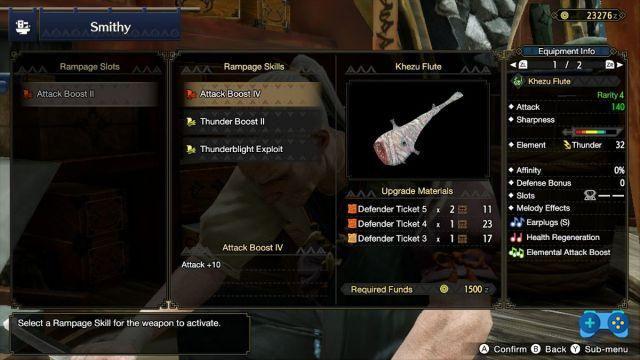 There are two main types of gear customization in Monster Hunter Rise:

You will unlock these abilities right after playing the first Fury mission in Monster Hunter Rise. You will receive a variety of Defender Tickets from these missions and can use them to further enhance an aspect of your weapon. When you select the Fury menu, the forge will show you your weapon and ask you to choose it. You can increase the weapon's attack or affinity (critical chance) or elemental damage. But you can only choose one at a time, so choose wisely.

“Decorations” is the word that Monster Hunter Rise uses to distinguish gems. Decorations are essentially objects that house perks, the same ones you find on your armor. You can craft them and then install them in armor or weapons. 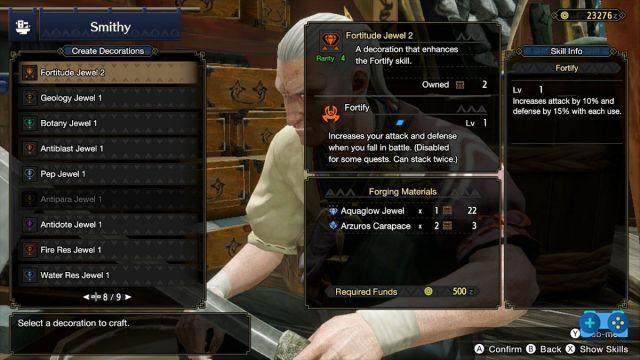 As you fight the tougher monsters, you will get a variety of gems and rare parts. You can then turn these gems and parts into decorations at the Forge.

Armor and weapons have different decoration slots, so you'll need to think carefully before proceeding to crafting. For example, if you want to get the Fortified ability in such a way that it helps you increase damage if you die, but you don't have it on your armor, you'll need to forge a Fortified Decoration. But the fortified decoration is a level 2 gem, so it won't fit a level 1 socket. You will need a level 2 or 3 socket to fit that gem.

Both of these systems gradually work their way into the game as you progress, so you shouldn't worry too much initially. But play with it a little and experience why you will need it when you reach the high rank.

Do you want to complete all the achievements and trophies and know all the tricks, guides and secrets for your video games? SoulTricks.com is a group of video game fans who want to share the best tricks, secrets, guides and tips. We offer the best content to be a source of useful information, so here you can find guides, tricks, secrets and tips so you can enjoy your games to the fullest. Are you ready to get all the achievements of that game that you resist so much? Enter and enjoy your favorite video game to the fullest!
Far Cry Primal Trophies / Achievements Guide ❯

Pokemon Let's Go how to find Charmander, Bulbasaur and Squirtle

Pokemon Sword and Shield, Sobble and its evolutionary line

Super Mario 64, how to get the Metal Hat

The Legend of Zelda: Breath of the Wild, a glitch allows you to play in first person

Add a comment from Monster Hunter Rise - Guide: How to create new weapons and armor