How to transfer files via Bluetooth between Android and iPhone

How to transfer files via Bluetooth between Android and iPhone. A guide on how to exchange data between two different mobiles.

Bluetooth is a technology that allows people to communicate through two or more phones without using cables. The most frequent use that is done via Bluetooth is to share and transfer files and photos between smartphones.

Activating Bluetooth is very simple and can be done or from Settings phone or from the mobile device home screen menu. The next step is to pair the two phones by accessing the Bluetooth interface to activate it and start searching for other phones with Bluetooth. After clicking on the target phone in the Bluetooth device list, select the option Send files to open the menu Fillet and choose the file to transfer. The target phone will simply have to accept or deny receiving the file. 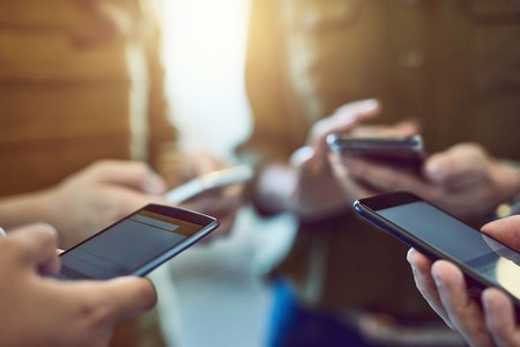 The method described above can be applied if the mobile devices have the same operating system, therefore Android smartphones with Android smartphones and iPhones with iPhones. But if you were to transfer files via Bluetooth between Android and iPhone? The situation becomes complicated. This is due to the fact that Apple, for security or other reasons, only connects its iOS devices via bluetooth to other iOS devices, excluding Android and Windows Phone.

Attention, however, there is an alternative that will allow you to transfer or receive data between Android and iPhone and it is called Send Anywhere. Let's see how it works.

How to transfer files via Bluetooth between Android and iPhone

If the Android phone or iPhone has a SIM and WhatsApp, exchanging data is very easy, but if the phone in question or the tablet did not have a Sim? In this case I recommend that you share the files and photos with the app SendAnywhere, a service created precisely to solve this problem.


Send Anywhere is available for Android, iOS, Windows Phone, as a website and as an extension for Google Chrome. After downloading and installing it on both mobile phones (Android and iPhone) start it on the Android or iPhone device from which you intend to send the file or photo. 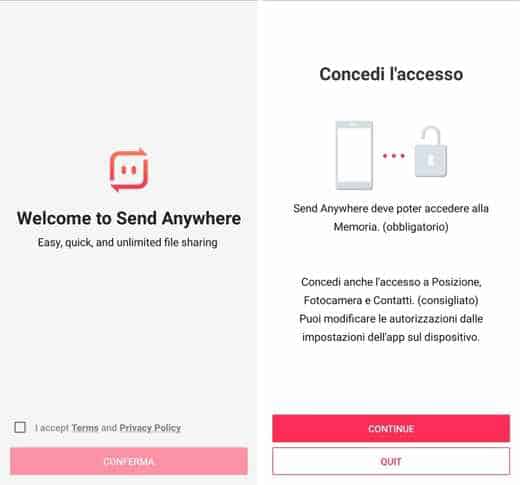 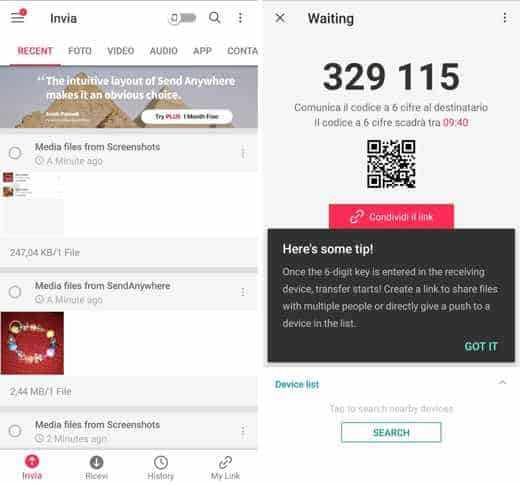 The app's home screen is very user-friendly. The categories are clearly visible in the top menu: Recent, Gallery, Video, Audio, App containing multimedia and non-multimedia files of the smartphone on which Send Anywhere has been installed.

After selecting the photo or photos, a preview of the selected file and the size and weight of the file to be transferred will appear in the lower part of the screen.

Then press between the commands at the bottom of the button Send and communicates the code to 6 digits to the recipient who from his iPhone or Android smartphone will have to type to receive it. As an alternative to the reception key, you can use the Qr code generated or share the link. 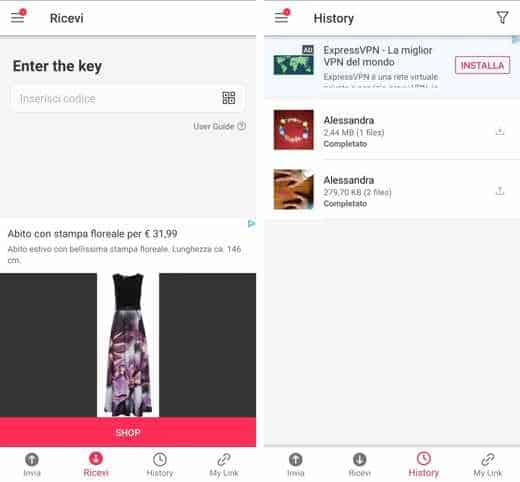 The code must be entered by the recipient within 10 minutes. The latter has to start the app Send Anywhere, press the button You will recive and enter the code communicated by the sender of the file. Once received, the file will be automatically deleted from the server.

The sent photo will be automatically saved in the folder SendAnywhere app Gallery if the recipient has an Android smartphone or in the app Roll if the receiver has an iPhone. Finally in the section History you will be able to consult all the files received and sent.

With Send Anywhere you can transfer any type of file between Android devices via WiFi or data connection (photo, audio, video, file, apk app, contacts) Apple iOS (photos, videos, contacts, files) and PC (any type of file) in an immediate and rapid way both for what concerns videos, photos, audio, documents, apps, programs and much more.

As you have seen in this guide Send Anywhere does not require any registration. You can use it free leveraging file transfer with P2P protocol. In this way the data will not pass from any server and will not be stored. Also there are no size limits both in sending and receiving.

How to transfer contacts from Android to BlackBerry ❯

How to gift an app with an iPhone or iPad

The best browsers for Android and iPhone

The best apps for online shopping

Do you want to complete all the achievements and trophies and know all the tricks, guides and secrets for your video games? SoulTricks.com is a group of video game fans who want to share the best tricks, secrets, guides and tips. We offer the best content to be a source of useful information, so here you can find guides, tricks, secrets and tips so you can enjoy your games to the fullest. Are you ready to get all the achievements of that game that you resist so much? Enter and enjoy your favorite video game to the fullest!