FIFA 19 FUT - Ultimate Team, everything you need to know about OTW (Ones to Watch)

The best transfers in the summer market!

Let's start immediately with the news of FIFA 19, which we remind you to be officially available for purchase from today. EA Sports has in fact announced that the Ones to Watch. But what are OTW cards? First introduced in FIFA 17, are special cards dedicated to the most interesting players purchased, in this case, during the summer market session (There are also winter OTWs and are likely to arrive between January and February 2019).

The peculiarity of these cards lies in the fact that the overall overall as well as the statistics are dynamic, i.e. they change over the course of the season. So if the player stands out for his performances, for example, by joining the TOTW (Team of the Week), or during the European competitions (Champion's League and Europa League), he will receive an upgrade of his statistics. The cards in question cannot be downgraded. In other words, they represent the cards with the highest stats a player can have. OTW card ratings will be updated automatically.

But that's not all, while in the past chapters of FIFA, the age limit for the OTW was set at 30 years, this year EA Sports has decided to eliminate it, thus allowing one of the most desired players in FUT, thanks to his passage. from the Merengues of Real Madrid to Juventus, Cristiano Ronaldo to join the Players to Watch. 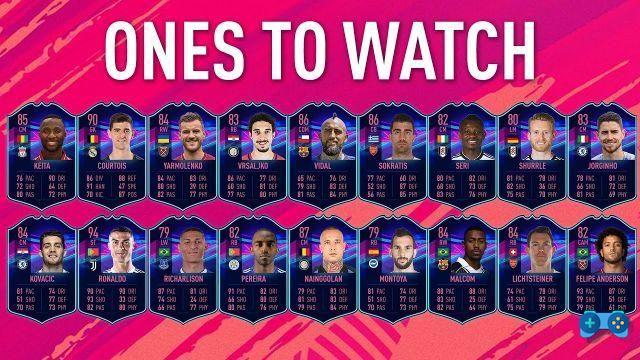 Are OTW cards good for trading?

The prices of OTW cards depend on the performance of the players and the number of IF cards received. That is why it is so difficult to predict prices. These cards therefore give the game a certain level of uncertainty.

We must therefore make some important considerations: buy an OTW card immediately, knowing that it will cost more than a normal card of an equivalent player? What happens if a player doesn't get the TOTW card we expected them to receive? When should you sell? Reduce losses or hold the card hoping it will increase in value? These are all difficult questions to answer and it is essentially up to you to take the risk or not to buy and / or resell them.

Below we leave you to the EA Sports Tweet. Players will be available in packs starting at 18pm (UK), 19pm.

We will of course keep you updated!

[Update] - Ones to Watch are available in packs for a limited time. The announcement came from the official EA Sports Twitter profile.

New clubs. New season. These are the Ones To Watch?. See the full team ➡️ https://t.co/mVlw35ukli #FUT # FIFA19 pic.twitter.com/K43JDbNav5

You will need a lot of luck. In fact, there is less than a 1% chance that one of these players will break out of the packs. This certainly comes as a shock to players approaching FIFA and Ultimate Team mode for the first time. Even those who have been playing for years, had the feeling that the odds were low but not up to this point.

We just have to wish you all good luck!

If you haven't done so yet, take a look at our review:

If, on the other hand, you need help with the FUT - Ultimate Team mode, there is our special guide:

Dragon Age: Inquisition GOTY Edition, extra content will not be on disc ❯

add a comment of FIFA 19 FUT - Ultimate Team, everything you need to know about OTW (Ones to Watch)