SSD and HDD - the best of both worlds in one disk.

Western Digital, a leader in the storage industry, recently unveiled the world's first hybrid drive based on solid-state and mechanical drive technology; the Californian company, whose SSDs are reserved for OEM users, aims in this way to grab a slice of the market not covered by the main SSD producers, the one made up of users who need speed and reliability, but who do not they can / want to compromise in terms of storage space, even on the move.

In reality, hybrid disks already exist on the market that use small nand memories to speed up access to the most frequently used data, however WD is the first manufacturer to offer a real solid state disk combined with a traditional disk, thus combining the the access speed of a true 120 gb SSD drive, the storage space and reliability of a 1Tb Blue series WD drive at 5400 days, more than enough to hold a large part of your digital “life”. 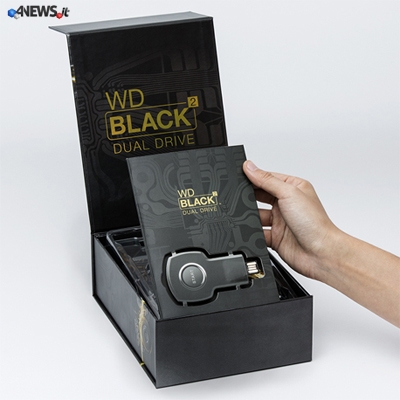 From the product packaging it is clear the great attention that the company has dedicated to what will probably be only the firstborn of a family of hybrid discs: the drawer box is black and, on the front, a large number 2 and a racing (later you will understand the reason for this detail mentioned in review) are the background to the silkscreened logo in gold-colored lettering. Inside the casket opening conceals a very special idea: a card holds what is in effect the key, complete with a start button as in the most modern sports cars, for our Black2. In fact, the USB key contains a self-starting device that leads us directly to the download page of the software essential for the operation of our hybrid disk and which we will talk about later.

Under it a USB-SATA cable needed to clone our disk (or to connect via USB any SATA disk), the manuals and finally our Black2.

The glossy black finish and the gold lettering make the Black2 the most beautiful record currently in circulation and a mortal pity having to hide it in a case; The dimensions are the classic ones of a 2.5 "disc, with the exception of the thickness and weight, 9.50mm (compared to 7mm of a traditional 2.5" disc) and 125g, this is due to the obvious circumstance that the disc consists of a real "sandwhich" of disks and controllers; however what interests us is the performance, so let's abandon the trifles and launch ourselves in the analysis of the performance of this hybrid disk

The consumption of the disk stands at 1.8w in operation and 0.9w in idle; A Marvell controller allows the two disks, the ssd one and the traditional 1tb one, to run on a single SATA 3 interface.

The SSD controller is a 4 channel JMicron 667H, the two 64gb MLC type NANDs (more reliable than the TLC used in consumer disks currently on the market) at 20nm, should, but the conditional is a must since they are not marked, be produced by Toshiba, while the DRAM chip is provided by Nanya. The choice of allocating 8gb to Over Provisioning is appreciable in order to guarantee greater reliability and security of the archived data and leave the actual 120gb free for archiving.

Looking at the specifications of the JMicron controller, the fact that it is not one of the best controllers in circulation or at least it is certainly not at the level of those offered in the Samsung or Sandisk solutions, is able to guarantee reading speeds up to at 350MB / s and writing at 140MB / s. against the 540MB / s and 410MB / s of Samsung's EVO and PRO solutions. The choice of a controller of this type could probably be related to the need to balance the performance of the SSD with that of the traditional SATA 6Gb / s disk which has nominal transfer rates of 140MB / s and latency of 5.5ms, or to keep the price. However, it remains a rather strange decision, given the potential of the product, which we hope will be overcome in a future revision of the Black2. 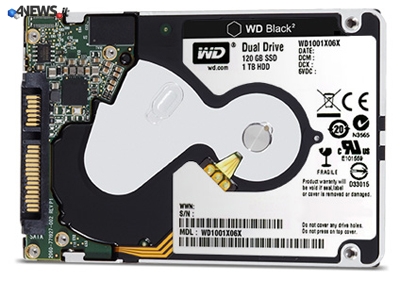 For our test we used a forklift machine equipped with

We then compared the results obtained by the Black 2 by simulating conditions of use as real as possible, that is, weighing it down with installation files and programs (the speed of an SSD disk changes significantly the more the disk is occupied), with a very solid SSD-only solution. common, a 840gb Samsung 120 PRO previously installed in the computer; the HDD part of the Black 2 was instead compared with a traditional solution from the same manufacturer, a 1tb WD Black.

But let's get to our test and see how this hybrid drive performs.

The installation of the device requires first of all the download of the software made available by Western Digital with the famous key we mentioned at the beginning, and is divided into two essential steps:

1) cloning of the previously used disk;

Trying to install the disk without having previously cloned your disk, the operating system was unable to recognize either of the two disks, neither the SSD nor the 1Tb disk.

Inserting the key into your computer you will have direct access to the manufacturer page dedicated to Black 2, from which you will be able to download free Acronis True Image 2014 (whose retail cost is € 49,90) as well as an executable of about 22 mb which will allow the correct identification of the 1tb disk by the operating system. The software in question is compatible with Windows only, so Linux and Mac OS users will not be able to use Black2.

Once you have downloaded the Acronis cloning software, connected the disk to a USB port with the supplied SATA-to-USB accessory and started the cloning process, the system restarts and the procedure continues without any intervention from the part. yours. Once you have completed the same, just replace the old disk with the new one because the system will reboot exactly as you left it, but with your Black2. At this point you will only need to install the 22mb software we were telling you about so that a new 1TB partition is created on your system.

Below are the results of the Black2 SSD obtained with the Crystal Disk and AS SSD tools. The first test with Crystal Disk was carried out with 1Fill configuration, non-compressible data, certainly the most realistic scenario in real life.

The second software, on the other hand, in addition to the traditional reading and writing measurement tools, both with sequential data and with random readings of various sizes, also allows you to simulate the behavior in reading and writing with 1gb data in ISO, Program and Game and evaluate the performance of the disk in relation to the compression of the files used.

Since these are rather clear data, we leave you to the images that speak for themselves, referring you to the conclusions for our judgment on the disc. 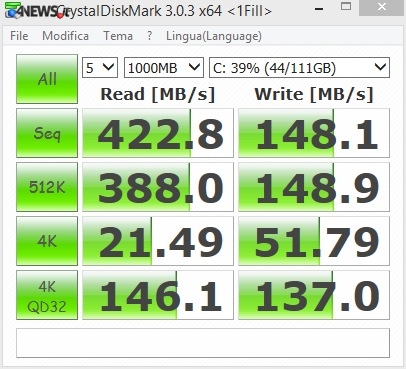 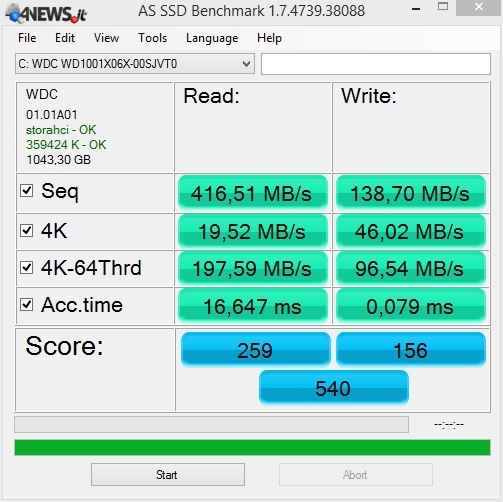 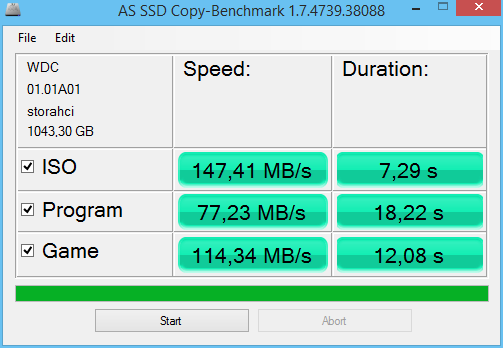 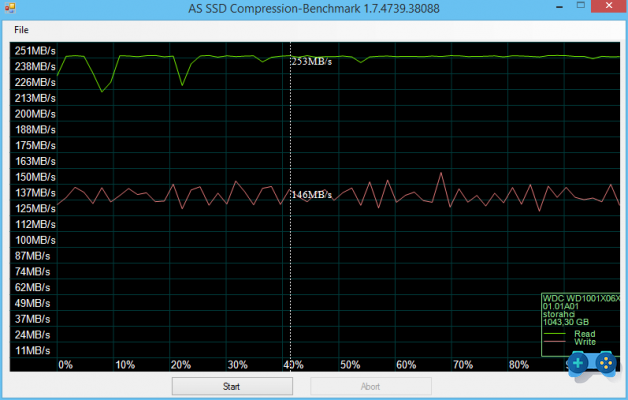 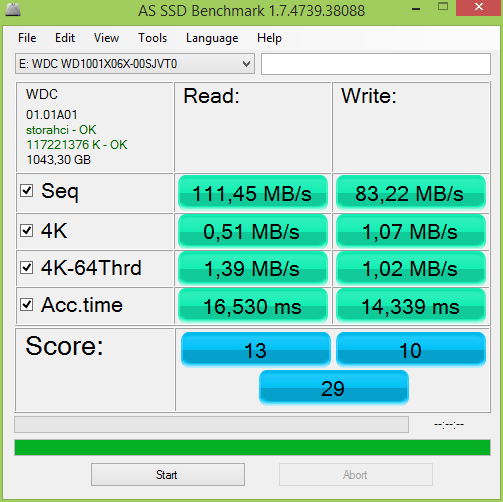 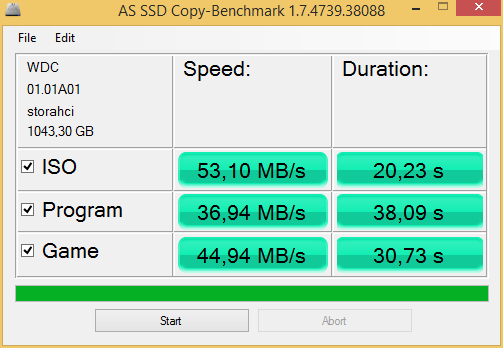 We have now tried to compare the performance of the Black2 with that of the top of the Samsung range, as well as one of the fastest drives currently in circulation, of course we have disabled all those settings and tweaks, such as RAPID mode, which would have made the comparison unfair. Here are the results with Crystal Disk and AS SSD. 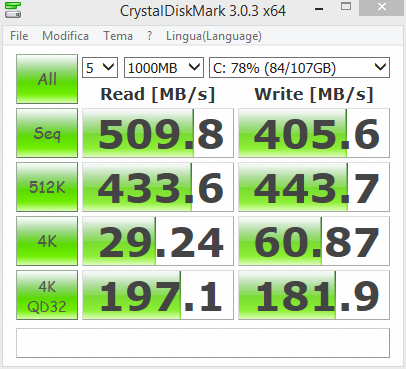 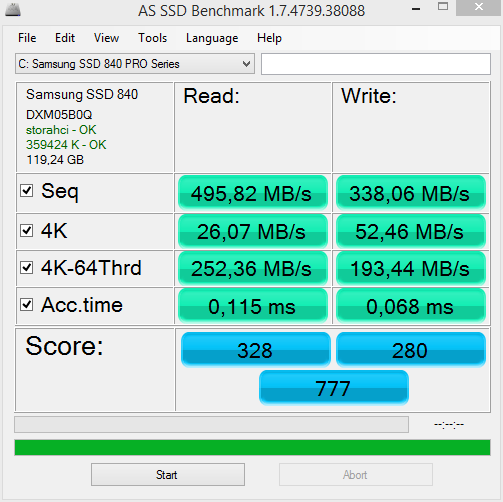 The WD Black2 is a product that is primarily aimed at notebook users. Western Digital has certainly identified its target for this new product in those who want performance and storage capacity on notebooks, opening a real new market that will surely interest those who, for logistical needs (a single SATA slot on their notebook ) cannot use separate SSD + HDD solutions. However, the development margins of a promising but still a bit immature device are all there. First of all, to review the choice of using a controller that is not really mainstream and rather used in SSD disks that have never shone for performance; secondly, the choice of using a BLUE series hard drive instead of the more performing BLACK from the same manufacturer, has strongly affected the benchmarks which are not exactly exciting also due to a firmware that seems to delay disk access times. Finally, a price that is not really accessible and the choice not to support Mac computers could be a brake on the spread of these hybrid discs.

On the other hand, the extraordinary simplicity of installation and the choice to give as gifts are to be rewarded Acronis True Image, one of the best backup and disk management software out there.

Ultimately, if you have a desktop computer, Black 2 is probably not the best choice: with the 299 euros needed to buy the Western Digital hybrid drive you can take home a far more performing SSD and buy a Western hard drive. Digital from the Black series or even a WD Velociraptor, the fastest mechanical disk currently in circulation. If, on the other hand, you have a notebook and don't want to compromise between speed and storage space, the choice is a must: the best of both worlds in one device.

The Witcher, the first chapter lands on PS3 and 360 ❯