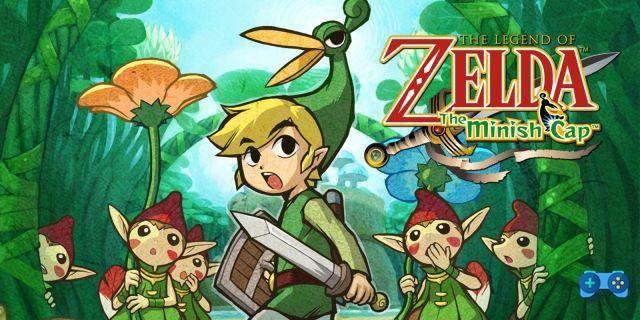 The Legend of Zelda: The Minish Cap, developed by Capcom under the supervision of Nintendo, is the third episode of the saga focused on the events related to the Quadrispada. It is a kind of prequel to Four Swords which, released on GameBoy Advance in 2004, he brought numerous innovations to the saga, borrowing many of the gameplay innovations from Four Swords' multiplayer itself.

The title from May 29 also arrived on Virtual Console Wii U, thus giving us the opportunity to find the good old man Egeyo and to hunt down the treacherous again Go. Will it still be as bad as we remembered it?

There is an atmosphere of great celebration Hyrule, where the anniversary of an important event occurs: the legend tells that many, many years ago, small semi-divine creatures came down to earth to restore peace and defeat the forces of evil that were threatening it. It was about the Minish who, giving a magic sword to a very young hero, allowed him to lock up evil in a large chest. So every year since then the kingdom stops, to celebrate the little heroes of the past.


However, this is an important year: it is also said that every hundred years the Minish return to visit the inhabitants of those lands. We are thus catapulted into one of these centenarians, with the princess Zelda in excitement for the big party held in the city. Link is thus led to the party, but a nefarious event is lurking: a young Vaati has in fact won the tournament that is giving away a sword made by the blacksmith Smith and the opportunity to stand in front of the sacred sword. Thirsty for power, Vaati seeks the Force by destroying the sword and releasing the forces of evil. However, he does not find what he is looking for: without giving up, he decides to look elsewhere, but not before endangering Zelda's life by casting her against an evil spell. The turn taken by events thus forces Link to set out in search of the Minish, the only ones who could repair the sword and save the princess.

This is therefore the beginning of our adventure, which will see us wandering far and wide around the game world in search of the four elements necessary to forge a new sword. The title, the first and only of the series developed and designed entirely for the GBA, is however famous for having introduced many innovations in the world of Zelda. Let's first meet the "nice" Egeyo, a very special bird that will become Link's typical green hat in this episode. But in addition to being an elegant headdress, the non-flying bird will have a much more important role in the course of events: in certain circumstances it will in fact be thanks to Egeyo if we can change the size of our hero, who can thus become smaller than an acorn. . This important expedient will allow us to approach dungeons from totally different perspectives, allowing us to explore the world of the tiny and reach otherwise unexplored areas.


In addition to the possibilities offered by our living hat, which will also allow us to perform other actions in addition to representing a sort of guide to never lose sight of the objectives of our mission, we will then also be faced with other innovations derived to a greater or greater extent. less marked precisely by the multiplayer structure of Four Swords. "Slingshot mushrooms", "mole gloves", as well as the mergers, will be just some of the possibilities at our disposal to solve the environmental puzzles that the usual, excellent level design will put us in front of, or to obtain upgrades and extra rupees. We can also talk about some of the moves that Link will be able to learn from the various sword masters he met along the way, such as the possibility of quadrupling, partly tracing what happened at the very beginning of Four Swords.

But if dungeons and gameplay are today an excellent example of how a title should be developed, the glimpse of the two-dimensional world of this little pearl does not make the graphic designers of modern titles regret. A slightly retro and nostalgic taste took us back in time, making us remember how avant-garde that vaguely hexagonal console created by Nintendo was for the time. A simply perfect perspective and evocative backgrounds, accompanied by some unforgettable sound effects (such as Zelda's voice shouting at us to invite us to hurry up to the party), are just the last of the ingredients needed to make us love this masterpiece again. It is useless to add other words on the soundtrack, which remixes old and new songs in a cocktail able to add even more to our wonderful journey into memories. The emulation on Wii U it is once again very good, with the anti-aliasing filter that does its job very well even on the TV screen, but which obviously performs beautifully especially on the most appropriate dimensions of the Wii U GamePad. Finally, it should be mentioned the always welcome possibility to create recovery points at any time, creating an immediate save using the R key.

The Legend of Zelda: The Minish Cap it is a title that absolutely cannot be missing in the videogame culture baggage of every player. Exemplary for level design and ability to innovate in tradition a series that already at the time of our first meeting with the Minish had reached the age of majority, the collaboration between Capcom and Nintendo had managed to produce an avant-garde portable game also from the point of technical view.

Like an excellent wine jealously stored for years in the cellar inside an oak barrel, the bottling of this masterpiece inside the Wii U Virtual Console today allows refined palates to delight again with its fruity taste, while sommeliers budding will have a great opportunity to approach perhaps forgotten flavors.

add a comment of The Legend of Zelda: The Minish Cap review