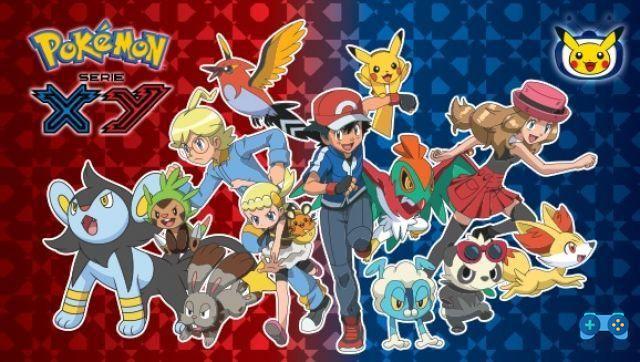 The power of Groudon e Kyogre it has been awakened and the dormant forces of the oceanic expanses are ready to face once again those residing in the Earth's core. With the presence as a basic Pokémon within the thematic decks of Pokémon XY Primal Clash, the two legendary mascots of Pokémon Ruby and Sapphire become the real protagonists of this new expansion.

With more than 150 new cards, however, we are dealing with a truly remarkable number of new possibilities. The expansion, in addition to the archaeological awakening, also introduces two new special energy cards, as well as manager cards inspired by the protagonist teams of the Hoenn region, Max's Team Magna and Ivan's Team Idro. Primal-Groudon EX and Primal-Kyogre EX, the mega-evolutions of Aggron and Gardevoir, their respective Mind Link cards, together with the four ultra rare cards and the four secret rare, represent a pretty good loot even for collectors, less for the their wallets.

But let's focus on the new introductory decks proposed by The Pokémon Company.

Seaquake, the thematic deck dedicated to Kyogre, combines the opposites: fire and, mostly, water they are in fact the only Pokémon types present, with a clear preference for monsters coming directly from Hoenn. The deck seems very balanced to us, with the welcome presence of the stadium card Rough sea, which in various situations can make the difference (in particular if inserted in a water / electro deck). Kyogre himself, with the expensive Ocean Cyclone attack, can be very annoying, dealing 80 base damage and 10 damage to Pokémon on the opposing Bench.

The presence of Whale clean, A phase 2 Pokémon that requires several turns to be put on the field but which, thanks to the Arctic Spray attacks and, above all, Disruption (50 damage + the possibility of discarding a Stadium card in the field), can put in great difficulty the strategies of our rival. Whiscash, on the other hand, is the only Pokémon in the deck with a ancient alpha trait, a new type of skill that is unaffected by item cards that inhibit standard skills (or attacks).

Sparks in the center of the earth

With Terraferma we meet Groudon who, unlike Kyogre, relies more on brute strength (100 damage with the Earth Destroyer attack), damaging our entire bench. The question changes with Archaeoevolution: we were lucky enough to find Primal-Groudon EX in an expansion pack along with the card "Mindfulness with Groudon" and, inevitably, makes the difference. The Vulcan Gaia attack deals 100 damage, 200 if there is a stadium card in play, while the Omega Barrier (one of the ancient traits we talked about earlier) prevents the effects that opposing manager cards would have on him. We haven't had a chance to field Primal-Kyogre (not even online we have been able to find it), but, at least on paper, the comparison between the two primordial powers seems more balanced than the basic versions.

Returning to the introductory deck, this one offers us the pairing earth / electro, with the addition of a couple of Pokémon of evolutionary lines of normal type (Zigzagoon-Linoone and Bidoof-Bibarel). As a stadium card we are assigned Fiery Earth, which actually was more useful after inserting in the Primal-Groudon deck (discarding it we can inflict 100 more damage) than for the possibility of drawing two cards by eliminating a basic Energy: the absence of recovery cards from the discard pile, in fact, makes each of the 12 basic battle energies present in the deck precious.

Among the Pokémon cards, Rhyperior stands out for its attack power, while Medicham's ancient “Omega Offensive” trait allows a useful double attack (damage / heal combos also possible thanks to Calmamente). For hit and run hits, on the other hand, Manectric's Lightning Turn stands out.

The packaging, by structure, remains the same seen for the other expansions of the XY series already considered (Hellfire, Furious Blows and Spectral Forces) and contains:

- for Seaquake, the card of Kyogre visible in the external frame; Groudon is instead the mascot of Terraferma;


- the deckchair themed (featuring the same artwork as the outer box), with 60 cards inside to start playing;

- There list of the 160 cards in the expansion. Obviously, the secret papers are missing;

- the inevitable game board to immediately deploy our deck against a friend in possession of another complete deck;

Another step forward for the Artistic direction and the work of the master authors of the various subjects: the artwork of the deck boxes are really very beautiful, as well as the graphics and poses chosen for the individual Pokémon (the Primal-Groudon EX card, found in an expansion pack, makes really nice figure).

Do you want to complete all the achievements and trophies and know all the tricks, guides and secrets for your video games? SoulTricks.com is a group of video game fans who want to share the best tricks, secrets, guides and tips. We offer the best content to be a source of useful information, so here you can find guides, tricks, secrets and tips so you can enjoy your games to the fullest. Are you ready to get all the achievements of that game that you resist so much? Enter and enjoy your favorite video game to the fullest!
Cyberpunk 2077 - Guide: Where to find legendary weapons, armor and cyberware ❯