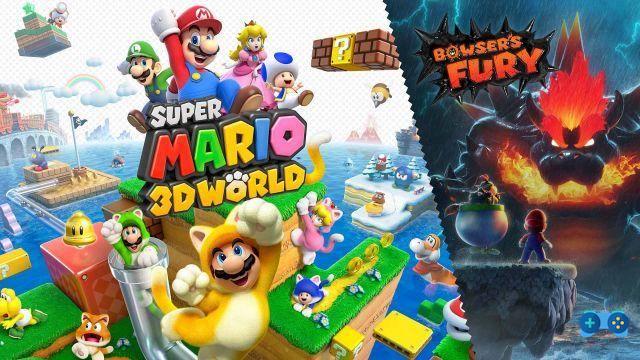 As you well know, this is not a completely new product, in fact, the Grande N has decided to give new light to an extremely undervalued title due to the commercial failure of Wii U and accompany it to an unreleased and decidedly captivating DLC.

Let's find out if this experiment turned out to be a success.

From Wii U with fury

Super Mario 3D World + Bowser's Fury will immediately offer you the possibility to choose which adventure to face, facilitating those who want to enjoy only a certain content.

Let's go in order, let's start with Super Mario 3D World, a title that arrived in the homes of gamers in November 2013 and never properly appreciated, surely this belated love on the part of gamers derives both from the technical side (revisable polygonal models) and from the expectation of the fans Nintendo. In fact, the latter, after trying New Super Mario Bros U and its DLC, expected a completely 3D “Mariesque” title, an expectation fulfilled only 4 years later with Super Mario Odyssey and Switch.


Despite the numerous doubts, the title managed to conquer audiences and critics, leaving aside the disappointment for the aforementioned shortcomings. This "new" adventure of the friendly plumber and his friends takes place one year after the events of Super Mario Bros. U. Our four heroes are quietly strolling through the streets of the Mushroom Kingdom, when, all of a sudden, a Toad notices a broken transparent tube. Mario and Luigi, like good plumbers, repair everything in no time at all, Sprixie comes out of the pipe, a green Princifata who asks for help from the improbable quartet, but in record time is reached by the usual Bowser, who imprisons her in a bottle and disappears inside the mysterious tube.

Without any delay, Peach, Toad, Mario and Luigi follow the villain inside the tube and begin a fun new adventure in search of the Princifate. 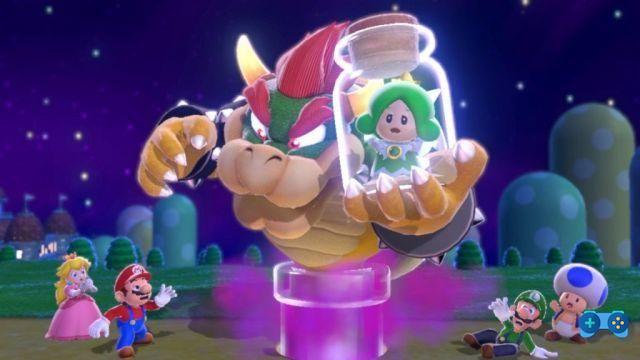 As previously mentioned, Super Mario 3D World is a title definitely far from the usual 3D canons, starting right from the visual, far from the one we have known in video games of the caliber of Odyssey and Galaxy. To this obvious difference, a new control system is added compared to the Wii U version, in fact, our characters will be a little faster, even if the real difference will be noticed by controlling the nice Toad, trust us if we tell you that managing a such a character is like going from a 500 to a Ferrari.


That said, let's talk about analyzing the gameplay aspects of this title. The level design recovers the flavor of past adventures, forcing our quartet of heroes to perform incredible pirouettes by collecting (green) Stars and Stamps before reaching the iconic flag.

Obviously, after 35 years, it might seem boring and sometimes repetitive, but this is where the genius of Nintendo's developers is exalted and gives us mind-blowing ideas that can offer amazement and pure fun. From the difficulty of some platform sections to the brilliant introduction of power-ups that are decidedly crazy, from the very nice and pucciosissimo Mario Gatto, able to climb almost anywhere, to the Double Cherry, collecting this fruit of "Pacmanian" memory, our character will be duplicated and we will be able to experience the unusual thrill of controlling two characters at the same time.

Each game world you will face will remain impressed in some way, in fact, each of them contains challenges of all kinds, from the exciting water races aboard the cute dinosaur Plessie to the puzzle worlds where we will control the good Captain Toad, loved to the point of bringing on Nintendo Wii U and Switch a standalone title. 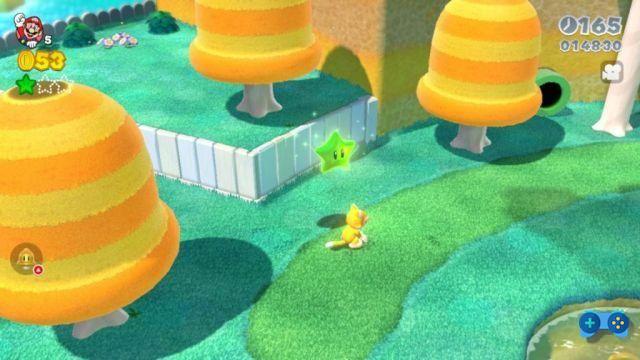 Among all the fun innovations introduced, we find the online multiplayer mode, which is added to the local one already present in the chapter for Wii U. On the other hand, given the current period, couch gaming could be problematic. Precisely for this reason we did some online sessions and we must admit that the result is certainly pleasant. During our test we did not notice any particular problems, except for a little input lag, not serious enough to compromise the gaming experience.


So, although it is still far from the ranking of the "Best Mario video game of all time", snubbing this pleasant and fun adventure would be a very serious mistake. However, we are sure that thanks to the consistent sales of Switch this episode will benefit from the right attention. 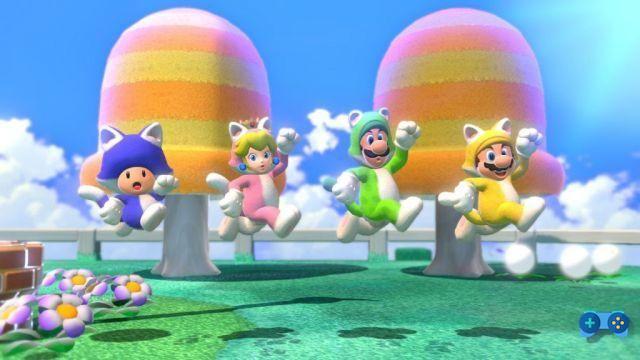 Bowser's Fury, a world to be discovered

This is probably one of the main reasons why you will purchase the Super Mario 3D World + Bowser's Fury bundle. In fact, this unprecedented "additional content" has shown itself to us in a decidedly mysterious way, presenting a decidedly more "bad" Bowser and an open-world game world, more like Odyssey than 3D World.

The "carefree" gameplay present in the other title that accompanies this expansion seems to somehow disappear, in its place you will find a world with a double face, colorful and merciless at the same time.

It all begins when our intrepid hero in dungarees is sucked into a bizarre black slime that transports him into a very special world. Here, he will find his long-time enemy, Bowser.

This time, however, it seems that things are different, in fact, the King of the Koopas is much more threatening, after a brief moment of bewilderment, the good Mario rushes between fire and flames to catch a Solegatto and activate the lighthouse, which thanks to the its powerful light drives away the dark creature.

After that unfortunate encounter, the serene returns and the protagonist runs into another enemy, the little Bowser Jr., who, realizing his father's new and unusual shape, asks Mario for help and decides to accompany him in this new adventure. 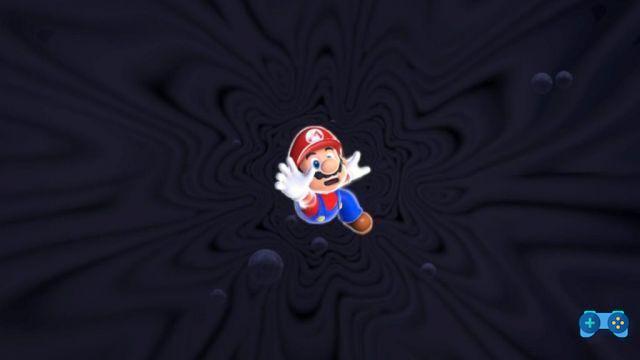 The game world is not open to the player right away, in fact, it will be necessary to obtain a certain number of Solegatti in order to unlock the other macro islands of the Sneak Pepper. To complete the quest and stop the furious Bowser it will take a time ranging from four to ten hours (depending on the skill and needs of the players).

Contrary to Mario 3D World, you will not be able to live your adventure in carefree, in fact, as mentioned above, the game world experiences a bizarre dualism, on the one hand the cheerful and sunny world inhabited by cuddly colorful kittens on the other. incessant rain and the presence of an enemy who can't wait to burn your fur. In fact, it is impossible not to notice the gigantic "Sun" with spikes watching you from afar. The latter, at the discretion of the game, will release Bowser's fury and force you to find a Solegatto to make him disappear, but once you have collected enough, the Gigacampane will activate, huge power-ups that will transform our plumber into Mario Cat in "Super Saiyan" version. Thanks to this upgrade, you will be able to defeat the King of Koopas and send him back to the mire from which he emerged.

As mentioned above, the little Bowser Jr. and the inevitable brush that accompanies him from Mario Sunshine (here the review of Super Mario 3D All-Stars) will be your inseparable adventure companion and thanks to his help (which you can set to your pleasure) you will be able to discover the many secrets that the island hides. Also, if you want, you can entrust the task of sparring-partner to a friend (in this case no online multiplayer) by passing him the Joy-Con. However, it must be admitted that the character will still be linked to the movements of the protagonist, so you will find yourself having to deal with a crazy top that will more than help you act as a heckler. 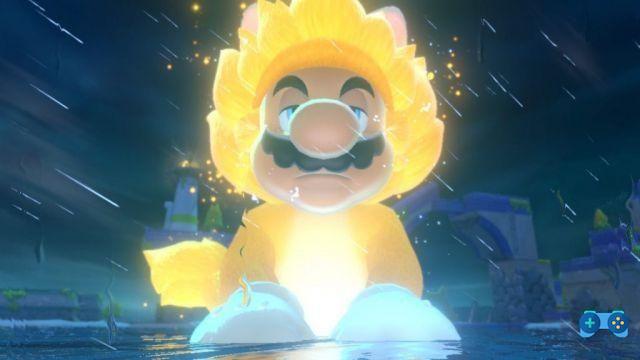 Super Mario 3D World + Bowser's Fury is a title that contains two souls, on the one hand the certainty offered by a title that in seven years has kept its beauty intact, thanks also to the fact that it runs (in Docked mode) at 1080p with 60fps . The second soul, that of Bowser's Fury to be clear, is a bit more troubled, in fact, despite the interesting and appreciable idea proposed, it suffers from some problems, completely unpublished in the Nintendo House.

We are talking about a series of slowdowns during the most hectic situations and the pop-up phenomenon, which in the long run can be annoying. All this without forgetting that the title in portable mode drops to 30fps, a bit disappointing for those who appreciate the way of developing the games of the Great N.

Honorable mention goes to the sound sector, in fact, to the beauty of the typical melodies of the series present in 3D World is added the excellent work done with Bowser's Fury. In fact, the music designed for this project totally reflects the double soul of the title, from the harmonious and relaxing sounds to the scratchy melodies that provide greater strength to the fury of the King of Koopas.

Super Mario 3D World + Bowser's Fury is certainly an interesting bundle, on the one hand the renewed perfection of the title released seven years ago on Wii U, which presents a decidedly brilliant level design and a gigantic amount of content, to the interesting experiment connected to the Bowser's fury. The latter proposal, despite some technical flaws, offers a completely new concept that has excellent potential in the future. Summing up, we highly recommend the purchase of the title as it offers newbies and not many hours of fun in the company of Nintendo's hybrid and a mode that will amaze even the most skeptical.

Do you want to complete all the achievements and trophies and know all the tricks, guides and secrets for your video games? SoulTricks.com is a group of video game fans who want to share the best tricks, secrets, guides and tips. We offer the best content to be a source of useful information, so here you can find guides, tricks, secrets and tips so you can enjoy your games to the fullest. Are you ready to get all the achievements of that game that you resist so much? Enter and enjoy your favorite video game to the fullest!
Hollow Knight, guide and lore: Fungal Caves III ❯