Sonic Mania Plus for Switch - our review 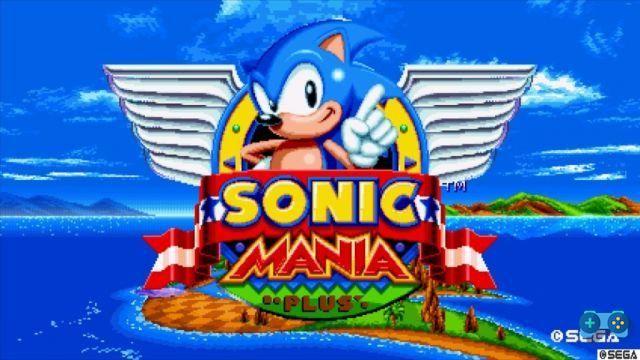 The blue porcupine is back with some welcome additions.

One year after the release of Sonic Mania, Sega wanted to please the fans of the iconic mascot of the Japanese house, bringing us the much sought after retail version, enriched with new contents, such as the addition of Ray The Flying Squirrel e Mighty the Armadillo.

Beyond the addition of these highly sought-after characters, Sega has entered the Encore mode e new mini games, in short, even those who have played the previous edition will have plenty of fun.

Why only now a physical version?

Takashi Iizuka during an interview with Famitsu said that in the team's ideas there was no release of a retail version, as the production would have raised the costs of the title, but since Sega itself and a huge amount of fans had requested one, the team of development decided to introduce new content given the higher price of a physical edition.

It is useless to say that this version is something that all gamers who have had the honor of experiencing the adventures of Sonic they want to have, starting from the box with holographic effect up toArt Book, without however neglecting the Reversible cover in Sega Mega Drive style. All for the modest sum of around € 30.


Those who have already purchased the digital version, but do not want to give up additional content, Sega has also thought of you, for only € 4,99 you can upgrade your version.

Sonic Mania Plus is the game dedicated to all those who want to learn more about the blue porcupine and its cheerful company, but also to those (including myself) who have walked Green Hill so many times that they know the area by heart.

The developers have decided to confirm the return to 2D, as the three dimensions clash and not a little with Sonic's idea of ​​speed, despite the appreciable Sonic generations, which blended the two worlds quite well.

The game offers a lot of historical stages, but with new enhancements compared to those present in the 90s, not only the upgrades make many areas new and interesting, also the introduction of new shortcuts and routes, all to be discovered for us who have some spring on our shoulders.

However, there are not only the good old levels, in fact Sega added Angel island, a rethought version of the original featured on S to Sega Mega Drive.

The story begins with Sonic e Tails who take a nap, but their rest is interrupted by an abnormal jolt of energy, together they try to investigate the source of this anomaly, in the meantime the same Dr. Eggman o Robotnik if you prefer, it sends its strongest robots for the same reason.


However, Sonic and Tails arrive too late, while the robots sent by Eggman are already extracting a new ruby, the "Phantom Ruby“, Which suddenly changes space time and teleports Sonic, Tails e Knuckles (who was resting in total tranquility nearby) a Green hill.

From this moment our heroes leave to block again the evil plan hatched by Doctor Eggman.

As mentioned at the beginning of this review, Sonic Mania Plus added new game modes, the first we mention is the Encore mode, directly following the main story, in fact after saving the world, the blue hedgehog is again teleported to Angel island from Phantom Ruby, here he discovers that Mighty The Armadillo e Ray The Flying Squirrel they are trapped inside a capsule.

After freeing his friends, Sonic discovers that one of the two is The Heavy Magician, who gets hold of the ruby ​​and escapes, forcing Sonic and company to chase after the ruby ​​again Phantom Ruby.

This new mode includes almost all areas of the main adventure (except Egg Reverie), but with a shuffling of the color palette and the different positioning of objects and upgrades. 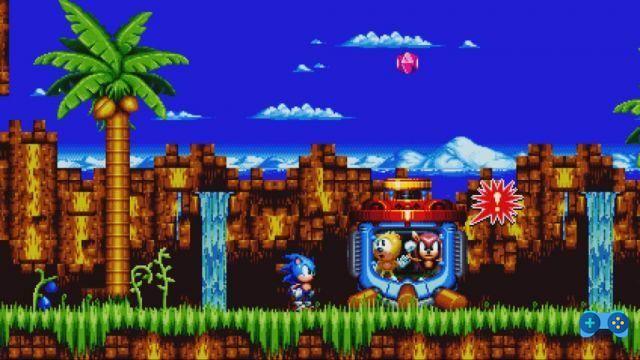 Multiplayer what a passion

The multiplayer mode, already present in the digital version of Sonic Mania, has been expanded to allow intense races for up to 4 players. 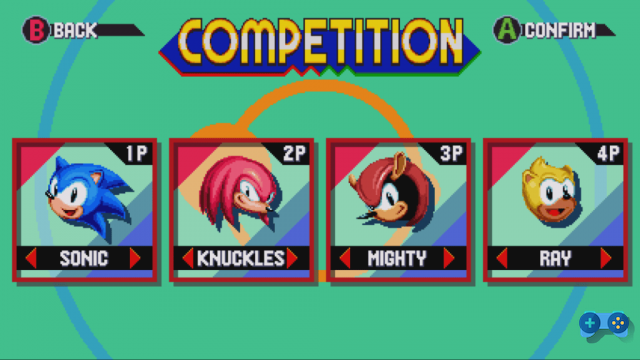 Sega added in Sonic Mania Plus a series of filters and effects that will take you directly back 25 years, to when we were playing in front of the old CRT TVs. The same music and sound effects are taken from the Japanese-made audio processor of the Sega Mega Drive. What good memories.

The version we tested is that of the least powerful console of the group and that is why we are happy to confirm that even the Nintendo console manages to keep the stable 60fps smoothly, on the other hand, the assets of the original games are mainly used.

Sonic Mania Plus
9.5 / 10 Soultricks.com
Buy on Amazon.com
Available on PS4, XBOX One, PC, Switch
For

- Welcome the presence of new characters

- ... although we would have preferred to have it sooner

Summary
Sonic Mania Plus is a real blast from the past, Sega has deliberately chosen 2D to allow players old and new to relive the adventures of the iconic blue hedgehog in a whole new way and with welcome additions of both modes and characters . We cannot fail to mention the splendid retail edition complete with an alternative cover and illustrated artbook.
gameplay
Graphics
Sonoro
Longevity
Final judgement
Do you want to complete all the achievements and trophies and know all the tricks, guides and secrets for your video games? SoulTricks.com is a group of video game fans who want to share the best tricks, secrets, guides and tips. We offer the best content to be a source of useful information, so here you can find guides, tricks, secrets and tips so you can enjoy your games to the fullest. Are you ready to get all the achievements of that game that you resist so much? Enter and enjoy your favorite video game to the fullest!
Conglomerate 451, RuneHeads title review ❯

Add a comment from Sonic Mania Plus for Switch - our review