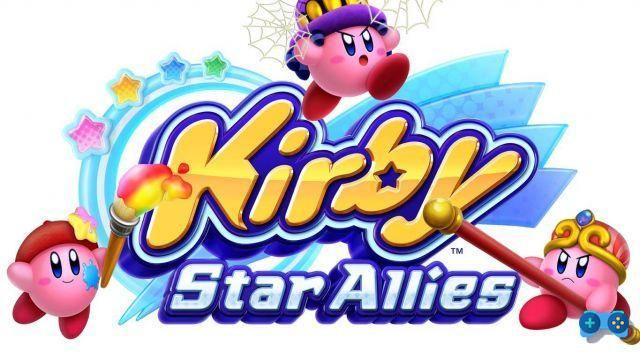 The return of the pink ball.

Since its first appearance, back in 1992, Kirby has made its way into the hearts of gamers. The cute pink ball, created by HAL Laboratory e Nintendo, has appeared in more than twenty titles, including main chapters and Spin-Offs. Its peculiar characteristic, unlike a Donkey Kong, just to mention a Nintendo title that offers an upwardly calibrated challenge rate, is precisely that of being a game suitable for everyone, relaxing and not particularly demanding.

Kirby: Star Allies, the tradition continues, not distorting the character created by Masahiro Sakurai. A horizontal scrolling platformer, in which our cute pink ball runs, jumps, floats and sucks in enemies. In portable or fixed mode, it doesn't matter. Kirby: Star Allies is fun, especially if played in company, ideal for those who, after a hard day of work or study, simply want to relax, literally being kidnapped by the colorful and unique levels of this new adventure, in the role of the chubby ball rose.

We turn on the console, start Kirby: Star Allies and we are ready for action. A colorful menu and the clumsy pink ball welcome us in all their splendor. Once the Start button is pressed, an Opening Video will start. In deep space, a sinister individual initiates his diabolical plan. Of the mysterious dark hearts they are thrown into space and with all their power rain down on Dreamland, transforming the hapless inhabitants into enemies dominated by a dark power. Kirby sleeps blissfully under a tree as the kingdom of Dreamland has to deal with what has happened. Our pink ball, when a heart hits it, awakens. Oh no, does Kirby go to the dark side? Do not worry, the effect is strangely opposite, in fact now the protagonist can make friends, throwing a pink heart, his enemies.

The gameplay of Kirby: Star Allies, revolves around this found narrative. A plot, as can be widely expected, which serves as a mere pretext to push us to explore Dreamland and its kingdoms first and then space. Everything, in its extreme simplicity, works, also thanks to masterfully made videos that manage to tell the events in an almost superb way. 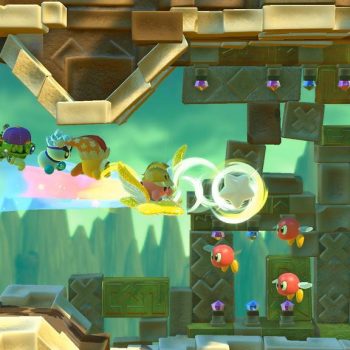 Kirby undoubtedly manages to flex his muscles when he goes back to basics. A bit like what happened for the last two chapters published on Nintendo 3DS, Kirby Triple Deluxe and Kirby Planet Robobot. Taking advantage of the hybrid features of the Nintendo Switch, HAL Laboratory and Nintendo have focused on the Local Multiplayer sector. In fact Kirby, in its colorful adventure, will be able to make use of three trusted companions. If we are alone, these will be controlled by the CPU, responsive and able to adapt to any situation. If, on the other hand, we are in company, there are many possible combinations; we can use, for example, the Pro Controller or the Joy-Con, united or separate, take advantage of the tablet mode of Switch and so on. We will inevitably be "tied" to Kirby. If we fall behind, we will be immediately brought back to the pink protagonist. 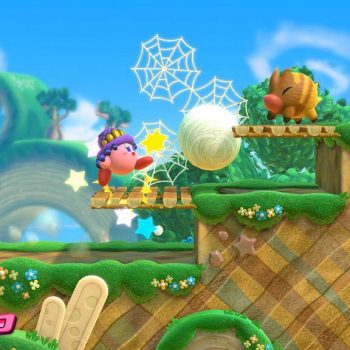 Our allies will have unique powers and abilities, useful in the continuation of the adventure e which can be combined with each other. The possible combinations are varied, mostly we will limit ourselves to adding an elemental power, such as fire, water, wind, ice, etc. If a friend of ours has the properties of fire and we have a sword, by combining them, we can obtain an enhanced attack and then hurl fire and flames on enemies. Or by exploiting the power of electricity when Kirby wears the cloak, we can have the electric cloak at our disposal, very useful for activating switches and discovering new play areas.

But that's not all, as we can use it, for example to destroy walls, or to overcome ravines of a unique power combined with our companions. For example, to overcome the ravine we can create a bridge, or to destroy the walls a rotating circle and so on. Here is that Kirby: Star Allies, revolves precisely around knowing how to best combine these powers, in such a way as to advance from scenario to scenario, perhaps collecting the many options present. There will also be boss-fights of different types. It must be said that the clashes are quite diversified but nothing complicated. Once defeated, the boss can be enlisted in our ranks, replacing one of the previous allies.

Kirby: Star Allies is the simplest chapter in the series to play and complete. It takes about 6 hours to finish the main storyline. What makes it all too accessible though is the fact that it lacks a real challenge rate. If we get stuck in solving an environmental puzzle, the CPU will take care of solving the puzzle, if by pure chance we remain still during a fight, our companions will eliminate the enemy. Relaxing yes, but not up to this point. The only difficulty is related to the collection of collectibles, scattered throughout the game scenarios. It therefore requires the use of specific skills and moves to be able to collect them all.

Another element that does not fully convince is the chaos that occurs during the clashes. If we play in portable mode, everything will be amplified by the tiny screen. An unimaginable confusion, sometimes we will lose sight of our pink ball, perhaps finding it away from the fight while our friends do the "dirty work." In TV mode, however, there is a slight improvement. Also, there will always be a sense of being literally guided from start to finish.

Often it will happen to press buttons at random, perhaps creating deadly combos, without even understanding how and who managed to do it. There was no need to make the game so easy. Alone it is not much, maybe played in company, with younger siblings and their parents, the fun will certainly be guaranteed. Finally, the minigames present, cute but certainly not memorable, do not convince. It seems that HAL Laboratory has not given us who knows what great attention and has limited itself to the simple homework done at home.

Kirby Star Allies can boast a technical sector of the highest level. Both the characters and the game stages have been masterfully crafted. The game levels, around 40, are well diversified. From green grasslands to marine areas, from caves to volcanic areas, then passing through snow-covered and tropical stages. Each level will give a glance to say the least sensational. The game, although it does not reach 60fps, runs smoothly and without uncertainties of any kind. The soundtrack, also at the top, will accompany our adventures.

- Lots of levels to complete

- Take advantage of the hybrid features of the Nintendo Switch

- Fun when played in the company of friends and family

- Confusing in some game situations

Summary
Kirby: Star Allies just did the homework. We would certainly have expected more from HAL Laboratory and Nintendo but unfortunately the final result is not convincing. The presence of 3 CPUs if played alone and 3 companions if played locally, makes the gameplay very simple. Virtually nonexistent challenge rate, various boss-fights but still calibrated downwards, a skimpy duration of the campaign (about 6 hours), mean that Kirby: Star Allies is limited to being a simple and nice pastime. We recommend the purchase only if you are a lover of the local mode and especially if you have friends, brothers, family members willing to join you to save Dreamland!
gameplay
Graphics
Sonoro
Longevity
Final judgement
Do you want to complete all the achievements and trophies and know all the tricks, guides and secrets for your video games? SoulTricks.com is a group of video game fans who want to share the best tricks, secrets, guides and tips. We offer the best content to be a source of useful information, so here you can find guides, tricks, secrets and tips so you can enjoy your games to the fullest. Are you ready to get all the achievements of that game that you resist so much? Enter and enjoy your favorite video game to the fullest!
iOS 14.5, the Tool to recalibrate the battery on the iPhone ❯

Bioshock Review: The Collection for Switch

Add a comment from Kirby: Star Allies, our review