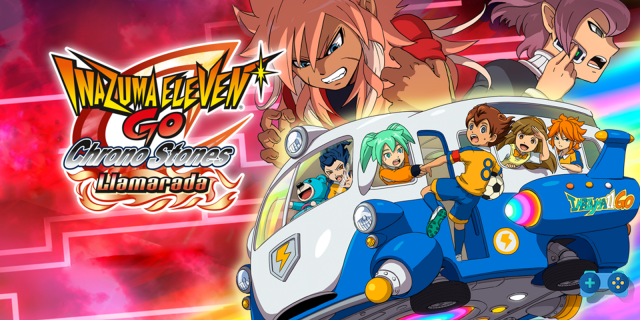 Will Raimon Jr. High be able to stop El Dorado?

Launched in Japan in December 2012 - and arriving in Europe on 27 March - Inazuma Eleven GO: Chrono Stones represents the latest appearance of the franchise on the handheld console of Nintendo and, like the previous chapter of the series, Inazuma Eleven GO (of which you can find the review HERE), it is a game di role with sports elements. Two variants, as usual: Thunder e Flame, which differ in very few details. The protagonist of this new adventure is once again Arion Sherwind and there is no shortage of characters from the past such as Mark Evans and new appearances of the first order and of the highest importance such as Fei Rune; there is also the introduction of new mechanics di game and numerous improvements which concern both the exploratory phase and the game phases in the matches.

What is going on?

Set three months after the story of the I walk Imperiale, our adventure will begin when in the shoes of Arion Sherwind we will return to Raimon Jr. High to discover that something has changed… the outdoor soccer field is no longer there and has been replaced by a baseball field! The other structures have also undergone drastic changes and the premises of the football club, officially closed, are now in disuse. A new threat coming from the future is trying, in fact, to make football disappear from history by profoundly modifying its essence and changing the events of the past.

The entire narrative phase will therefore be based on numerous twists and will allow us to travel into the past and venture among the great warriors of the past in an attempt to create the perfect team and save football.

They will also keep us company and have a central role in the story Fei Rune, a footballer also from the future, e Clark Vor Wunderbar, cute animated teddy bear (even if he doesn't think he is), companion of Fei Rune and pilot of the time Machine which will allow us to travel far and wide in the most disparate historical eras. The entire Raimon Jr. High team will also be present and other characters whose presence we do not want to reveal to you, but who will make you very happy to discover for yourself.

Since the first chapter launched on Nintendo 3DS, the securities belonging to the franchise of Inazuma Eleven have seen very few changes in a gameplay well structured and functioning that hardly manages to bore the players. Also in Inazuma Eleven GO: Chrono Stones history repeats itself and the small number of changes still manages to donate freshness e new "vita" to the now calibrated game system developed by Level-5.

What catches the eye during the first few seconds of the exploration phase is the return of the machine photographic, which will allow us to take photographs of certain objects which will then prove to be essential in the recruitment of some characters; the topics of conversazione, also linked to the recruitment of characters and, finally, also the classics make their return shopkeepers who, as the case may be, will be able to sell us consumables capable of restoring ours PE o PT, equipment capable of increasing our statistics e secret notes that will allow us to learn new techniques.

Continuing the course of the story it will then be possible to unlock some characters that will allow us to recruit new players thanks to the AmicoCard, which can be purchased through i Charisma Points and that will allow us to get the player of our choice after satisfying the necessary requirements; also present the vending machines.

Means Clark Von Wunderbar finally, we will learn about one of the new mechanics belonging to the title: the MixiMax. Through MixiMax it will be possible to merge the aura of one player with that of another in order to obtain a increase in statistics, guaranteeing upgrades not only related to level up or equipment, but allowing us to organize our team in order to sacrifice some players in favor of others who will become more and more powerful.

As for the matches, the Summons that in this new chapter will evolve and allow users to equip themselves with a special armor: this will allow you to obtain a significant gain in terms of statistics and will guarantee the use of special techniques at a cost of 0. The armor, compared to the summons, have a limited duration in time. Using the same mechanics, the MixiMax Trans, that similarly to what concerns the normal MixiMax, they will allow us in the course of history to obtain certain special powers that can be activated during the Matches to obtain a further increase in power; the MixiMax Trans will make continuous use of the PE that once exhausted will declare the end of this state of transformation.


No difference in the conduct of the matches, which will be controlled as always through nib e touch screen; 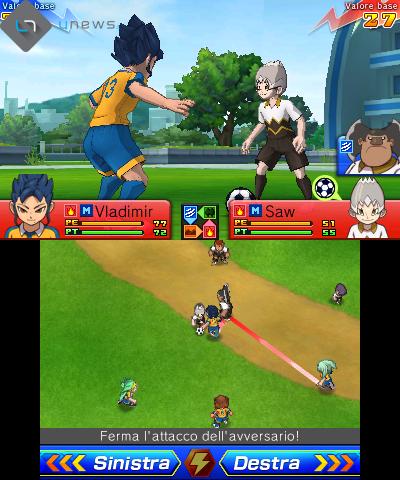 some slight improvements in the curve di difficulties, now slightly steeper and that will be able to guarantee fun and never one-way matches throughout history.

Present, as in the previous chapters of the series, the classic game features multiplayer is online courses in that local that will allow us to to exchange our players, to take part in the challenges or get of special players which will be distributed through the online platform made available.

Inazuma Eleven GO: Chrono Stones manages to make good use of the potential of Nintendo 3DS, guaranteeing a adequate graphic level and overall stable performance, except in some fairly populated situations where they will be conspicuous i cali of frame rate; the high quality level of texture and models polygonal they go perfectly with choices color made by Level-5 which once again manages to recreate a game world that is alive and very real.

From the sound point of view there are no major changes: the colonna sonora remains perfectly enjoyable and it will be possible for us to appreciate the dubbing in Spanish in the most important conversations and during the cut-scenes.

We recommend using the New Nintendo 3DS for the possibilities offered by Super-Stable 3D, however, it will be possible to fully enjoy the title even on the old iterations of the console.

Sonic Mania Plus for Switch - our review