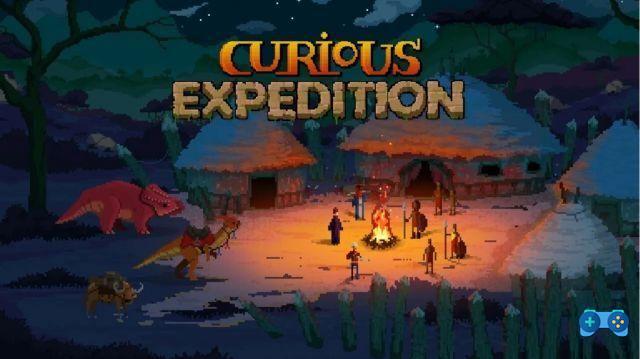 Explorers discovering the most remote lands of the globe in the race to become the most famous of all.

"The indie gaming industry is the incubator of the future of video games as a medium," Reggie Fils-Aimé said in a touching speech at TGA 2019. And indeed among these titles developed by teams of a handful of people we can see brave, innovative, experimental works. This is precisely the case with Curious Expedition, a title released for PC in 2016 coming to all consoles in a few days. The work marks the debut of Maschinen-Mensch, a small German studio based in Berlin born in 2014.

And what a debut! The game, already highly appreciated by indie fans on PC, is a particular one hybrid between roguelike and management, and despite some adaptations, it works great on consoles as well.

Curious Expedition is essentially a travel simulator to discover the wilds set in the 19th century. Starting from a Victorian London, we will be able to choose a hero to play in each game. There are several among our choices historical characters, like Darwin, Marie Curie or Tesla, each with their own specific peculiarities and a different starting team.


The object of the game is to win a marked race in six different expeditions against 4 other famous explorers, getting more fame of the others. The notoriety gained after each trip depends on various factors, in addition of course to the completion of the mission with the finding of one golden pyramid. For example, having a photographer or artist with us to document our businesses will increase our popularity when we return home. In the same way, the speed could also guarantee us a bonus in fame, as well as the donation of precious artifacts found in the wilds.

In short, Curious Expedition wants to be an experience capable of replicating the sense of discovery and adventure of a certain type of fiction and cinematography, also passing through many of its clichés. It must be said that the title is not taken anyway never too seriously and often with situations bordering on the surreal, it softens an atmosphere that would otherwise risk being heavy.

As mentioned, Curious Expedition is a hybrid. The basic structure is that of a roguelike, in the sense that the game allows us to choose a character at the beginning of the game, generates the various areas which we will explore in each shipment randomly and involves the permanent death in case of game over. However, the experience differs not a little from the classic roguelike style. Especially if you mean the genre as it has been declined in recent years, in a very action vein that goes through The Binding of Isaac, Enter the Gungeon, Nuclear Throne up to the most recent Dead Cells.


In the Maschinen-Mensch debut title, the pace is much calmer, punctuated by long days of travel and from the nights of rest, and the action is decidedly more reasoned. The game puts us in the shoes of an explorer who leads his group in this series of expeditions.

A balanced team is the key

Before even leaving for each trip, Curious Expedition dedicates a small section to preparing for the mission. Located in the port of London we will be able to organize the equipment and our small group of five members, including possible animals.

We can recruit new members on the quay in London or in indigenous villages that we will meet. Each of them will have some specific skills, such as a bonus to reputation or transportable load, and gods Dadi, which determine its usefulness in combat and beyond.

Once in the land to be explored, progress in the game is managed using the left stick, planning the movements. The map, initially almost completely obscured, is made up of small hexagons of land on which to move. Each hex belongs to a type of land and has different travel times. As it is natural that the path on the lawn is smooth, while it is more tiring climb a mountain or cross a forest, or even move in the desert. But things get even more interesting when you realize that you are moving around the sand dunes consumes water supplies of the group. It is also surprising to discover that using machete units it is possible facilitate advancement in the jungle and likewise the ropes facilitate climbing. 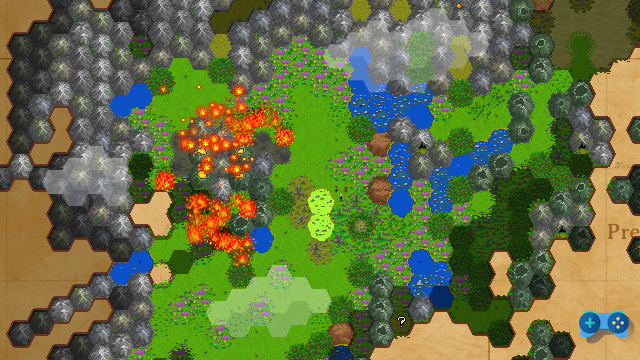 The stages along the way

Curious Expedition uses, in practice, various expedients to simulate a real one exploration among the dangers of nature, and he succeeds wonderfully. Obviously the field of view on the map is expanding as you move. Another little gem is that the highest peaks are sighted first, to further increase the sense of realism of the experience.

During these vicissitudes in nature the sanity of the group, which can be recovered with consumables or resting in specific places. For example we could meet a waterfall or a rock shelter where to spend a few nights, to refresh our team. Or we could choose to ask for hospitality in a indigenous village, if ours reputation allows us. Otherwise we could trade items in exchange for a bed for the night.

In the villages you can also trade and recruit new members for the group, and often you can even find some secondary objective assigned to us before departure, at the port of London. But be careful: taking advantage of the hospitality of the natives reduces our reputation and could make people nervous.

The dangers of discovery

Another alternative is to rest in one religious mission, again trading goods for a roof. If there was a clergyman in our group, we could instead receive free hospitality at these places.

The possibilities of a trip in Curious Expedition do not stop there of course. It happens to meet gods sanctuaries with precious objects, which in some cases if plundered they will curse us, making shipping much more complicated. It can happen that the curse leads to volcanic eruptions, glaciations, sinking of the ground or invasions of huge arachnids.

On the other hand, it is also possible to meet sacrificial altars where the goods offered can be stolen. Anyhow you will lose reputation in plundering spiritual places. But these are not the only places that can be explored. Treacherous caves, nests of dangerous animals, hot Springs, Egyptian tombs and many others are the pitfalls that can be encountered.

A matter of dice

In many cases, to overcome these dangers, whether they are entering a small tunnel or encountering a dangerous tiger, one must resort to dice system of the game. In the case of actions to be taken, such as climbing a dangerous temple, creeping into a narrow crevice or entering a cave without a flashlight, the game will simply roll our dice and if we get the specific value we need to get through the situation unscathed. Alternatively we will instead suffer injuries or losses in the group.

As regards the combat, this happens in turns. During our turn we will be able to roll the dice of our characters all together, several times, possibly choosing to keep some of them. Among the various faces released we will be able to create combinations to be used against our enemies. To do a practical example, if we get a sword we can use it to do a point of damage. By combining a sword and a shield we can use thecounterattack skill and inflict two points of damage by getting a shield of defense value two on the next turn. 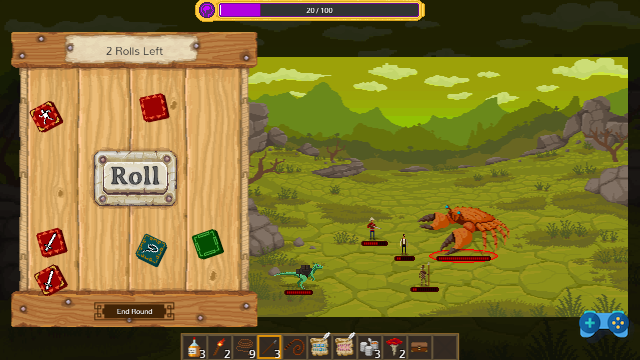 It goes without saying that the fight is staid, complex, but satisfactory once you get it.

Leader of the group

Curious Expedition also inserts a narrative component, although barely mentioned, in this already singular mix of mechanics. In fact, it will happen that you can find yourself in small multiple choice dialogues with the natives, and an answer could give us more reputation, for example.

In the same way we can find ourselves in front of details requests from group members, who often fall in love with members of the tribes they meet. So it happens that a comrade asks us to stay in the village, which leads to his loss. Or it is possible that we are asked to make the person our adept fell in love with flee. If we choose to accept this proposal, a roll of the dice will determine the success of the operation. If successful, we will earn a new group member and more loyalty. Otherwise we will lose our reputation.

In addition, the game often places us in front of internal disputes to our team or to requests for help during the nights of rest from injured natives.

Similarly in some cases we are faced with the choice between forwarding a partner to risk our skin for us - the outcome depends, also in this case, on the dice - or give up. Curious Expedition is like this: it doesn't take itself too seriously, but it can slap you in the face with complex moral choices or with the death of a companion you were fond of, perhaps after many trips together. 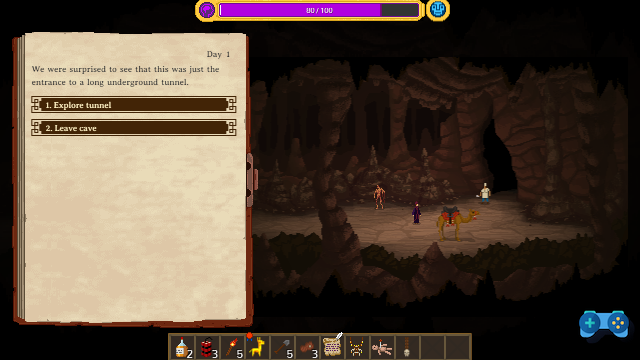 The debut title of the small team from Berlin is a hidden gem. A little difficult to approach, because of his cheap pixel art aesthetics and inconspicuous gameplay, of course. But on the other hand it is a satisfying, profound and varied experience, which fully manages to give the sensations that the developers wanted to recreate.

Curious Expedition is a difficult game, among other things, challenging even to the most accessible mode, but fun and rewarding. The spirit of adventure, the desire for discovery, the feeling of danger and the prudence that an expedition entails, make up the whole a truly suggestive experience. For all these reasons, this indie work is of enormous value, especially for players who like to step outside the established boundaries that separate genres, in search of new emotions.

Too bad for some defects, as adaptation in Spanish which in some cases is superficial, or some bug, like the annoying one that afflicts the underground pyramids. In these cases it is necessary to activate some seals to bring out the goal, but it happened to us that, despite having activated everything necessary, this did not happen.

Problems that certainly partially undermine the gaming experience, but do not take anything away from the value of the title and the particular experience it manages to return. Curious Expedition perfectly represents the experimentation that can only be found in indie games. And in this specific case, the players who choose to give a chance to the Maschinen-Mensch title will receive in return an infinite range of possibilities and adventures. It is works like these that remind us of the importance of variety and the beauty of discovery.

Summary Curious Expedition is a brave and intriguing title, capable of surprising and entertaining. A dazzling debut, net of some defects, which we hope will bring notoriety to the studio, so as to give us a sequel soon.
Another World 20th Anniversary Edition, starting today on PlayStation 4 ❯