Ninja Gaiden for the first time on a Nintendo console

After the tremendous success with Ninja Gaiden Black and Ninja Gaiden 2, he could Ryu Hayabusa refrain from jumping on the two screens of the Nintendo DS? The answer is no: the greatest ninja of all time has in fact also landed on the European DS with a new unreleased episode: Ninja Gaiden Dragon Sword! To begin we must immediately say that things have changed compared to the home counterparts. First of all, the control system, adapted to the best for a console like the DS and secondly also the graphics sector. But let's go in order.

As soon as the game cartridge is inserted into the appropriate slot, we will notice how the presentation text will be arranged along the shorter side of the touch screen; the entire experience with Ninja Gaiden Dragon Sword in fact, will be savored with the DS in upright position, just to understand us à la Brain Training. At first glance, the main menu will not present a modest vastness of options: in addition to the game hand and sound settings, we will only have the possibility to start Ryu Hayabusa's adventure at the lowest difficulty level. Already from the first clashes, however, we can see how Dragon Sword has not lost the famous spirit of the saga: the difficulty. Although the opponents are very strong and resistant, the clashes will gradually become repetitive. Especially with Bosses, the fighting technique will be the same: they will have to be stunned (through the use of shuriken or arrows) and then give them some well-aimed blows with the sword. During the battles, however, we could also count on the use of the so-called Ninpo, spells that will be "drawn" on the touch screen to make it work. 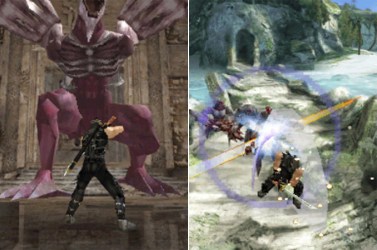 But the most surprising thing is undoubtedly there accuracy and efficiency of the moves thanks to a massive touch screen and stylus support. Moves that go to group in a huge park moves, ranging from simple hits to the more effective Izuna Drop. Passing the stylus over the enemies, we will perform a normal sword stroke, while drawing a line upwards from our character, we will give life to a jump that can then be combined with other traits for devastating or in any case fast moves such as the blow of the swallow. However, the plot is not the best compared to his predecessors: the charming Momiji, a close friend of Ryu, is kidnapped by the clan of the spider and it will be up to us to defeat him to save the girl. Plot that however extends over thirteen chapters (interspersed with dialogic sequences in the form of comics) that cover a longevity of not very high levels. In fact, the more experienced will need just four or five hours to complete the story, while the newbies will need a couple of hours more. 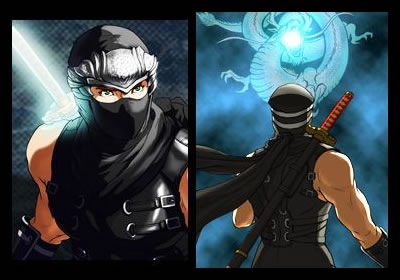 But know that Ninja Gaiden Dragon Sword can turn out to be a game as long as it is rewarding if faced also at the three successive levels of difficulty that will appear once finished at the starting level. If we then add the search for the 45 amulets scattered in the kingdom of Hayabusa, we cannot say that we are not satisfied. Even technically Ninja Gaiden Dragon Sword leaves you amazed when compared to other masterpieces released on this console: the Ninja team has in fact created a product superior even to The Legend of Zelda: Phantom Hourglass. The polygons of the sprites have been made with excellent care while the settings, always varied, contribute to increasing the depth of the game that always proves to be up to the situation to make his own, thanks, as already said, a simply amazing stylus implementation. 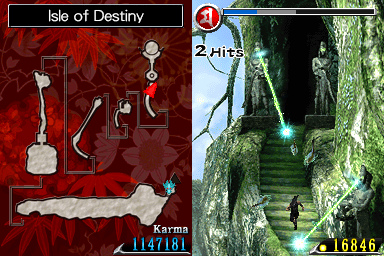 The frame rate is stable and the action runs smoothly without the slightest hint of loading. The camera, the main flaw of the other episodes, has been studied in detail to ensure an efficient game viewing especially in boss battles. The sound also contributes positively to the final evaluation given the amount of oriental-flavored songs and sound effects that inevitably have to be listened to with headphones. Wi-Fi Connection support is also available to compare your own karma (points obtained through clashes) with those of the most skilled ninja in the world. 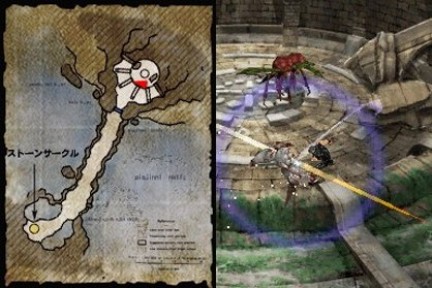 We were simply surprised at Team Ninja's work as we weren't expecting such good results in terms of both gameplay and quality. We are in fact facing one of the best Nintendo DS games for graphics and use of the stylus. For the less experienced of the saga, however, the game may be difficult, albeit short-lived. Among the defects found, however, we cannot explain the decision to move the game action vertically, a position that is sometimes uncomfortable. Ninja Gaiden Dragon Sword, however, remains a very valid title that we hope is not the last given the separation between Itagaki and Tecmo. 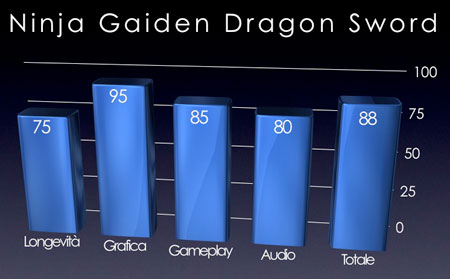