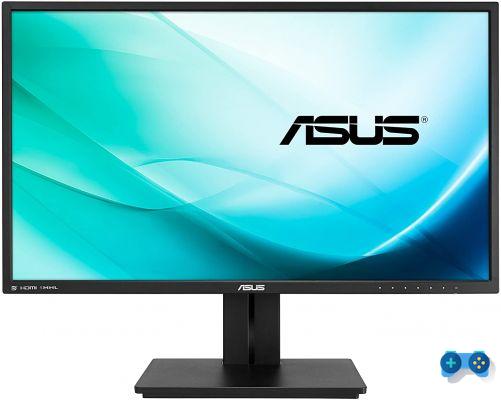 In recent months there is nothing but talk of 4K. TV, gaming, smartphone, the acronym is now stuck on a little bit of everything. A bit like what happened with 3D, 4k branding helps to sell, especially among the less experienced slice of users who, perhaps, did not realize that at the moment the number of TV contents or 4K movies is negligible, 4k videos are mainly demos and demonstration films, ultra-broadband connections are still science fiction in much of the country, and a gaming machine capable of playing 4K games at an affordable price is still a mirage.

As if to verify this assumption, we asked Asus for one of their most attractive 4k monitors, both in terms of features and price, the PB279Q, and we configured a machine to be able to discreetly reproduce content in 4k, without costing an arm and a leg. [Spoiler] The premise is confirmed: the material in 4K is still too little to appreciate a monitor like this, but we can guarantee you that the difference is there and it shows, especially when you go back to your traditional monitors.

The monitor in question is one of the first 27 ″ displays from Asus to offer resolution of 3840 × 2160 in combination with a AHVA panel (in this case an AU Optronics M270QAN01.0 AHVA). The AUO AHVA (Advanced Hyper-Viewing Angle) technology promises to maintain an almost perfect visibility even at very wide viewing angles, without loss of color saturation and with results certainly superior to those of traditional IPS panels that are close to those, indeed unbeatable, AMOLED displays.

From an aesthetic point of view, the monitor has a rather professional design with a matte black plastic finish, and a thin frame only 13 mm at the sides and 18 at the bottom, on the back of which there are the buttons for the on-screen menu and for ignition. Although the function of the buttons is indicated on the front, we found this choice rather inconvenient, which prevents immediate recognition of the button being pressed.

The panel itself has a semi-gloss finish that guarantees greater contrast, without generating excessive reflections.

The stand, very heavy and therefore very stable, allows a 90 ° rotation of the screen to position the screen vertically (Pivot), and an inclination of 5 ° forward and 20 ° backwards. It is also possible to adjust the height, very useful for identifying the correct viewing angle in relation to the seat.

In the lower part, on the back they find place

The monitor also features a small 2w speaker, whose performance is not really exciting, but which is still a good solution for reproducing system sounds and other basic audio. On the other hand, there is no USB HUB, an element available on other products in the same price range.

THEabsence of HDMI 2.0 required to connect the display with the cable Display Port 1.2 included, in order to enjoy the 60hz refresh rate at 3840x2160. By connecting the monitor in HDMI (only HDMI 1.4 ports are present), in fact, you will get, at the native resolution, only a refresh rate at 30hz. The monitor's subpixel layout is RGB, which ensures good font viewing on both Mac and Windows with ClearType. The definition of the characters is very good thanks also to the good pixel per inch ratio that is of 163ppi.
Excellent out-of-the-box screen calibration, although the general quality seems to be affected by a certain non-uniformity of the lighting at the edges. The color rendering is first of the class, resulting the same always saturated and bright but at the same time realistic. The same goes for the black, deep and never washed out. The excellent and in-depth calibration modes also allow you to act on white calibration, as well as on those of RGB colors and to obtain an even more accurate setting of the range. The resulting image with even a minimum calibration is always equipped with a decent depth and three-dimensionality, which makes viewing any content pleasant.


Also good reactivity: although the response times (5ms,) are not the lowest ever recorded for a gaming monitor, in game we have not been able to observe, even in rather frenetic situations, any ghosting phenomenon.

The Display also offers a series of preset calibration functions so-called "SPLENDID" that improve the image quality in relation to the use made of the display. Among the various predefined settings are: Scenario, Standard, Theater, Game, Night, sRGB, Reading and Darkroom. The function is interesting Vivid Pixel which improves, by acting on the outlines, the quality and definition of the displayed text (on this point the rendering of the text on Mac Os X 10.10 is on another planet)
The presets are flanked by a series of manual setting modes that work by intervening on the l
saturation level of the three basic colors and allow you to set the gamma and color temperature between three preset levels: “Warm,“ Normal ”and“ Cool ”.

The rendering of 4k with Windows 8.1 and Windows 10

At this point of the review, although not strictly connected to the hardware under test, a small digression on the 4K format and in particular on the rendered with Windows 8.1 and Windows 10 which we only had the opportunity to try for a few hours before the sample sent was returned to us. Windows 8.1 is clearly not made to take advantage of such a high resolution. Although Microsoft's operating system allows for setting fonts and other elements of the OS in a larger format, the handling of the custom setting is, let's face it, done with the feet. The text, most of the time, at maximum magnification appears outside the window and almost all applications, from GOG to Steam, through Photoshop and Office applications, have fonts too small to be used. With Windows 8.1 we also found a problem starting the PC. The monitor, connected in Display Port, did not receive the signal from the graphic card remaining “Waiting for signal” until the operating system started and making it impossible to access the bios functions. The problem, solved by updating to Windows 10 and the drivers of the graphics card used (Gigabyte G1 Gaming Nvidia Geforce 970), can actually also be solved under windows 8.1 by connecting the display with both an HDMI cable and a DP cable and then selecting once the system is started the visualization only via DP, but it is a further demonstration of how the adoption of 4K is not yet “problem free”.

Under Windows 10 the font situation improves significantly, although numerous improvements are still needed, especially in the management of icon sizing. Some applications do not yet fully support 4k, or have, as in the case of Steam Big Picture, incompatibility problems with the Windows resize tool, causing malfunctions and some crashes.

Is 4K, Gaming and Cinema really worth it?

The 4k Gaming topic is still controversial. Although by now most of the most recent titles support 4K, there are still few hardware solutions, and in particular the graphics cards, which allow you to play with the right peace of mind at such a high resolution, while maintaining stable, around 60, the number of frames per second.

The test configuration (see opening ed.), Which we could consider at the time of writing to you, mid-range, in most of the tested titles could not offer sufficient fluidity at the resolution of 3840x2160p. The games we tested, Tomb Raider, The Witcher 3 and Far Cry 4 in particular, suffered from dramatic drops in frame rates up to 20 fps, without at the same time making an improvement in image quality compared to the immediately previous resolution. such as to justify the huge economic outlay necessary for a hardware upgrade. It must be said that with practically zero or largely reduced aliasing, all the anti-aliasing filters that so much affect the game's framerate are useless and therefore a fine calibration of these game settings could smooth out some of these problems, without however being able to them. resolve completely.

More interesting, as mentioned, the 2k solution (2560 × 1440), which manages to guarantee with almost all the games reviewed, a stable frame rate and above all an evident qualitative difference compared to the canonical definition of 1080p.

Made with film material

By setting the full screen view, the full HD image from your movies or bd will obviously be upscaled. One of the advantages of 4k is that the image in Ultra HD (3840 × 2160) is exactly double, in terms of pixels, compared to that in Full HD (1920 × 1080). This circumstance makes the upscaler's task less burdensome and all this translates into a minor loss of detail, which becomes completely negligible with vision at a distance of about one meter, and which only rarely gives rise to some small artifact.
The excellent calibration of the monitor guaranteed a perfect cinematic vision, very realistic and without excess saturation, a circumstance that is not always observable in displays devoted more to gaming and the professional world than to cinema. Practically absent the phenomena of juddering.

Do you want to complete all the achievements and trophies and know all the tricks, guides and secrets for your video games? SoulTricks.com is a group of video game fans who want to share the best tricks, secrets, guides and tips. We offer the best content to be a source of useful information, so here you can find guides, tricks, secrets and tips so you can enjoy your games to the fullest. Are you ready to get all the achievements of that game that you resist so much? Enter and enjoy your favorite video game to the fullest!
WWE 2K19, full playable roster revealed ❯

What are IPS monitors

How to update TomTom navigator