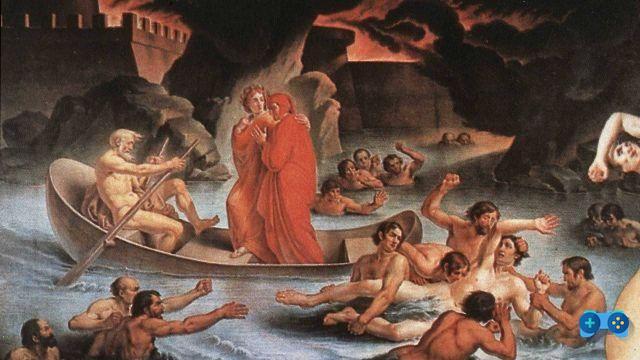 A short time ago we honored the 700th anniversary of death di Dante rediscovering with you the video games that have drawn inspiration from the Divine Comedy. Today, however, we have decided to dedicate the right space also to those films that contain in their essence the art of Dante's comedy.

In case you have never delved into the work of Supreme Poet Florentine, let's do a little review. The Divine Comedy is an allegorical poem, written in chained triplets of hendecasyllables (or Dante's triplets) and tells us about the long journey that the Tuscan poet faces by visiting Inferno, Purgatory e XNUMX. Paradiso.

Within this list, we have decided to include only "recent" films, as films of the type Maciste in Hell o Dante and Beatrice (silent film of 1912) could be difficult to find and enjoy.

If the world of video games has tried to draw an example from the immortal work of the Supreme Poet managing to scratch only the surface, the cinema has delivered to the general public some certainly interesting products, let's find out together what it is.

Let's start with the film most connected to Dante's poem. Indeed, the latest cinematic adventure of the Professor Robert Langdon, based on the bestseller of the same name by the American writer Dan Brown, will accompany us on an interesting killer hunt in the maze of Florence.


In fact, the film presents the crazy project of a billionaire who intends to destroy the whole world through an epidemic somehow connected to the pages of Dante's Comedy.

This singular battle between the iconic professor, brilliantly played by Tom Hanks, and the conspiracies of the Consortium it will surely be able to bring back to your memory not a few passages of Alighieri's work.

This fantasy-dramatic film collects references to three different works, from the myth of Orpheus and Eurydice toHamlet, even if it is impossible not to connect it to the Divine Comedy, by virtue ofincredible journey into the afterlife that the protagonist will have to play to save his wife from an eternity of damnation.

The interesting work directed by the New Zealand director tells us the sad story of Chris (masterfully played by Robin Williams) and Annie (played by Anabella Sciorra, actress known for playing Gloria Trillo in the series And Soprano). In fact, despite sharing a life blessed with love, their happiness is cut short when the two young children die in a car accident.

Chris as a skilled neurologist manages to keep the pieces of a broken family together, until the grim reaper strikes him too. At that point, the sorrow was so strong that the woman committed suicide. The man becomes aware of the insane gesture since XNUMX. Paradiso he is in, and decides to travel back to Hell in order to bring his wife back.


We can see a lot of Dante's work in this film, from the sin of which Annie stains herself, told by Dante through the words of the suicide Pier delle Vigne in Canto XIII of Hell, Chris's courageous journey to the Underworld, in the company of an exceptional Virgil.

Pixar has long been able to bring interesting content to our homes, but Coco is a separate chapter. In fact, the colorful feature film directed by the American director leads us to live an otherworldly adventure.

The plot puts us in the shoes of the young man Miguel Rivera, a XNUMX-year-old Mexican who secretly carries with him the "forbidden" dream of becoming a musician, just like Ernesto de la cruz, his personal myth and prematurely broken successful singer.

During the Dia de Muertos (Mexican holiday connected to the memory of the dead), the boy, to participate in a music competition, steals his guitar from the tomb of his idol, suddenly passing into the world of the dead.

Here, accompanied by the faithful dog Dante Alighieri and from the bony Hector (in the role of a very nice Virgil) tries to break the curse and find his musician ancestor.

This interesting film with a stellar cast, abandons the logic of travel as in some of the films listed above. In this case, in fact, we focus more on sins and Dante's law of retaliation.

Seven, shows us the investigation that involves two detectives, played very well by Brad Pitt (David Mills) e Morgan Freeman (William Somerset), who will have to find out what sick mind is hiding behind a series of terrible murders. Apparently, any of them would be connected to the sin of which the victims were guilty in life, from gluttony to sloth.

In fact, murder changes its modus operandi, as according to the killer, death must correspond to sin. For example, the victim who stained herself in the life of greed (Throat) he is forced to gorge himself on food until he dies. This punishment in particular is different from that conceived by Dante in the Comedia. For the sin in question the Supreme Poet had thought of a severe punishment, forcing sinners to atone for eternity for their guilt. living like animals in a violent stinking rain.

Nobody would expect one of the two detectives to be an integral part of the killer's machinations, to the point of trying to make him the executor of his crazy plan.

We are talking about the first film presented in Cannes after the long forced absence from the stage due to some pro-Nazi statements attributed to the provocative Danish director.

The film analyzes the events of Jack (Matt Dillon), a serial killer with artistic and philosophical ambitions. This subject commits a series of murders, ferrying his victims into a real hell.

One of the most interesting aspects regarding this film is connected to the bizarre disguise that the protagonist uses to commit his murders, let's talk about a red cape, which somehow recalls the cap of Dante's memory.

During the long "race" with the police, lasting 12 years, our killer is accompanied in flashbacks by his very personal Virgilio (played by the great Bruno Ganz), who in the moment of maximum difficulty, or when the police will solve this macabre puzzle, will take the protagonist with him to Hell.

Where to see it: CHILI, iTunes

Obviously we could not forget the animated transposition of the famous video game created by EA e visceral Games. We are not talking about a product that with its own reading of Dante's work has established a new peak in animated films.

In any case, we can say that for being born from a video game it is a very interesting product. The basis of the plot is more or less the same as the video game (which we talked about in the dedicated special), so we will not dwell on the subject. The aspect that deserves the right attention, however, is the mix of artists / directors who have presented their vision, although it may surprise in the first moments.

In conclusion, we can admit that both experiments (video game and film) managed to restore, even if minimally, the atmosphere of Dante's Comedy.

Let us know in the comments if you already knew these feature films, and if you had already noticed the clear inspiration from Dante Alighieri's masterful work. Also this time we want to conclude the special as the Supreme Poet would do, therefore: if our special has captured your attention, let's hope that a heart or other appreciation has gained.

add a comment of 700 times Dante, when Divine Comedy and Cinema meet